Two greats betting the ponies at the track! Charlie Chaplin and Walt Disney! Great photo I ran across this week! 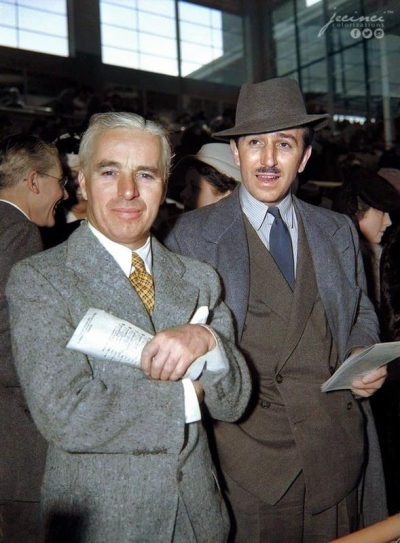 I know, I know….too early. But this song has been on my mind. Andy Williams (one of my favorite Christmas-time singers) and “Happy Holiday.” LOVE this song!

Monday the 26th – THE DOCTOR IS IN! – Even though it was a windy day I was determined to run some errands and have lunch. Why would the wind be an issue for lunch? Because in California we can’t eat indoors; and can only eat Al Fresco. I fired up the Torino and stopped by my mailbox and picked up my packages. Then I headed over to the Burbank Auto Doctor to drop off the Torino for some standard service; oil change, filter checks, etc. My pal Sara picked me up and we went to lunch at Lancers. But it was so windy we were literally covering our food during a stiff breeze so dust and dirt wouldn’t be our “side dish.” When I got home and got my mail, I saw that I had a letter from a state agency that had me spending the rest of the day digging out old files and researching an issue. It literally took me six hours to research, scan and write the rebuttal letter. Come to find out, I believe that the issue may be rooted in a simple labeling error. I honestly believe that I labeled a set of documents inconsistently with what the state of California had on file. It was my job to try and prove that the documents were the same, just labeled differently. Bureaucracy. Ugh. I recorded my auditions later, typed out Wally’s Week, and then hit the hay to be up in time for a Voice Over session on Tuesday!

Tuesday the 27th – SPIC AND SPAN SPOOK! – My neighbors have been remodeling their patio for the past month, and their patio is right outside the window where I record my Voice Over tracks. I had a session scheduled for noon, and was really hoping that all the cutting, sanding and pounding would stop for a lunch break. I signed on at noon, but the producers were running late. By the time they got on the line it was 12:30, and miraculously the construction noise stopped. The session was nice and short, and the timing was perfect. Soon after we finished the construction noise started up again. Whew! I drove my cat Spooky over to the groomer’s to get a bath and have his nails trimmed. He had become a fairly dirty little kitty and really needed a cleansing. I drove my Mustang over my mailbox to pick up some packages and mail off my documents to the state of California. I had a nice salad on the patio at Paty’s, and thankfully the windy conditions had abated. It was an absolutely gorgeous day. It was made even MORE gorgeous when I got a text from my parents informing me that they had snow and 18 degrees! I went home and did some work until it was time to go get Spook. Once I picked him up he was very, VERY clean and white! I got back home and got on-line with my friend Michelle so we could get her airplane ticket to come to LA to do a photo shoot in the desert, and help me with a puppet project. Once everything was settled I decided to grab a quick nap on The Most Comfortable Couch in the Universe. But I was jarred awake by loud, booming noises outside. It was fireworks. But WHY?! I realized later it was because the L.A. Dodgers won the World Series. Yawn. I went back to sleep. Later I recorded a ton of auditions, and then made a sloppy joe and watched another episode of “The Time Tunnel.” It was an excellent episode, but they changed history by putting a modern-day doctor (with his modern-day medical kit) back in the year 1805. It was a great show!

Wednesday the 28th – SQUEEZY PEASY, VOTING’S EASY! – My pal Edi picked me up and we headed over to Universal Studios to vote early. Parking was free, and it literally only took us 7 minutes in and out! It was great, and we got to vote on the new touchscreen models! Feeling rather high and proud, we went on the Citywalk to have lunch at Johnny Rockets. We did a little shopping, and then Edi took me to the Burbank Auto Doctor to pick up my Gran Torino. It was in pretty good shape overall, but they did say that the fuel filter was a little dirty. On my drive home, I heard something under my car go KLUNK, and my wheel drove over something. I had no idea what it was, so I pulled a U turn (safely, of course) to go back and see what was lying in the street. All I could find was a piece of wood that had been split in to several pieces. It literally sounded like a major part of my undercarriage fell off in the street! I called The Burbank Auto Doctor and asked if they had put any wood on my car. Mike said they put blocks of wood between the lift and the car, so the lift doesn’t risk damaging the frame or body of the car. He said it was nothing to worry about. But it sounded terrible! I came home and started working on a launch for Friday; the day before Halloween. Over the past few years I’ve been working on a book and merchandise project for monster kids everywhere. It’s called “Donnie Druthers’ Christoween Capers.” It’s a series of 13 short stories that basically combines Halloween and Christmas. I had the first story animated by a very talented artist named Luke Ski, and I couldn’t wait to show it to everyone! It’s my hope that the Christoween stories will find a good home and we’ll be able to launch all of the books and merchandise soon! The website we’ve set up… christoween.net …is set up to attract attention from strategic partners in manufacturing, publishing and animation. Check it out! I did my nightly auditions, and then headed to Jerry’s Famous Deli to meet Edi and her husband Elliot for dinner. But because Jerry’s is closing for good on Friday, they really didn’t have much in the way of food. I hate to see Jerry’s go, because that restaurant literally served as my ‘office’ for many years, but they’ve become another casualty of the whole virus thing. Very sad. I did take a quart of their famous chicken noodle soup to go.

Thursday the 29th – PHONE-Y DOCTOR! – My neighbor Bob walked with Roxy and I down to the corner restaurant to get a bite of lunch. Then I dropped Roxy off at the groomer’s to get a bath and then it was back home to do some work. I had a phone appointment with my doctor to fill some prescriptions. Unless I have to have him look me over in person, I’ll just stay at home and chat with him on the phone. But an appointment where I need to be examined, I’ll go into the office. It all worked out very slick, and my prescriptions were phoned into the pharmacy. An hour later I drove to CVS to pick them up, and then I stopped by to pick up Roxy. I worked on last-minute things on the christoween.net website for the big Friday unveiling. I recorded my auditions, made some spaghetti and watched another episode of “The Time Tunnel.”

Friday the 30th – CHRISTOWEEN.NET! – After all the years I had spent on designing the merchandise and writing the stories, it was nice to finally be able to share the work with the world. I had gotten permission from my attorney and agent to release the first story in “animatic” form. My pal Luke Ski did a fantastic job on the animation, and Alexander Arntzen’s score is perfect! We’re working out a specific social media strategy now to keep the posts alive through Christmas in hopes of getting some interest from publishers, manufacturers and animation studios. I organized my bills and receipts, and then headed out late at night to get some groceries. I stopped at Denny’s to get some food to go, and then came home to enjoy “The Time Tunnel” with my dinner. It was another episode featuring my old pal Malachi Throne, one of the greatest character actors of the day. Magnificent! I really miss that guy! He played Machiavelli, who had been transported to the Civil War time by mistake! Amazing!

Saturday the 31st – HAPPY (?) HALLOWEEN! – 2020 will be known as the year without a Halloween. Most likely it’ll also be known as the year without a Thanksgiving, a Christmas, etc. etc. Even though Halloween this year enjoyed a beautiful full moon, on a Saturday night, with an extra hour of celebration, nobody could really go much of anywhere. Sad. But it WAS a beautiful, warm day. I walked to the stylist to get a cut and color, and then went home to do some work. I ordered a pizza and watched “Frankenstein Meets the Wolfman” on TV. As I was watching it I realized that I hadn’t ever seen it before! Unbelievable! It was fun Googling the film and reading about the backstories with all the problems they had during filming. Bela Lugosi as Frankenstein was supposed to have lines, but they were cut out after test audiences laughed during a screening. They also abandoned the storyline that the monster was made blind from the previous operation in “Ghost of Frankenstein.” It was rumored that Lon Chaney Jr. (who played the monster in “Ghost”) would also play the monster in this film, AS WELL AS the Wolfman. Both characters! But the amount of time it would take to change him from make-up to make-up would have been considerable, so they hired Bela. Later I changed all the clocks in Planet Wallywood for the idiotic change back to Standard Time. Twice a year we change the clocks, and nobody has STILL given me a good reason as to why. It’s absurd and there outta be a law against it. With all the clocks I have here it takes quite a while to do it right. Later I made my Saturday Night Super Saint Salad and watched the third episode of “The Saint.” I learned that Sean Connery passed away just before I went to bed on Sunday morning. As if 2020 couldn’t have gotten any worse.

Sunday the 1st – STANDARD SUNDAY! – Back to standard time meant that it’s getting dark around 5:30pm now. I’m OK with that, as I prefer the night-time anyway. I worked around the house all evening, and then recorded a TON of auditions. I fed and walked Roxy and then relaxed the rest of the night. Ready for what could be an ‘interesting’ week. 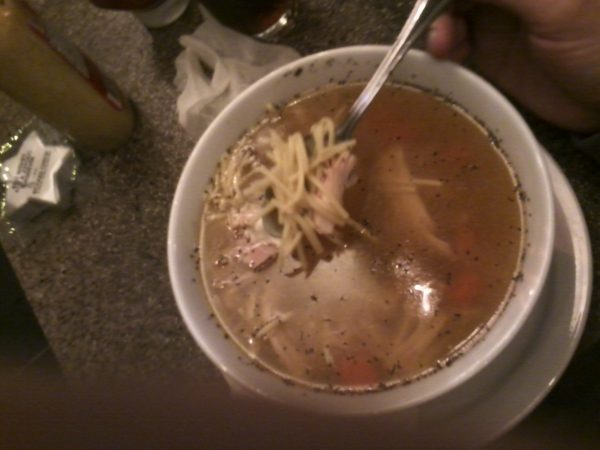 The last bowl of the famous chicken noodle soup at Jerry’s Famous Deli I’ll likely ever have. Even though there’s talk that they’ll open again after Covid is over, I’m not convinced. 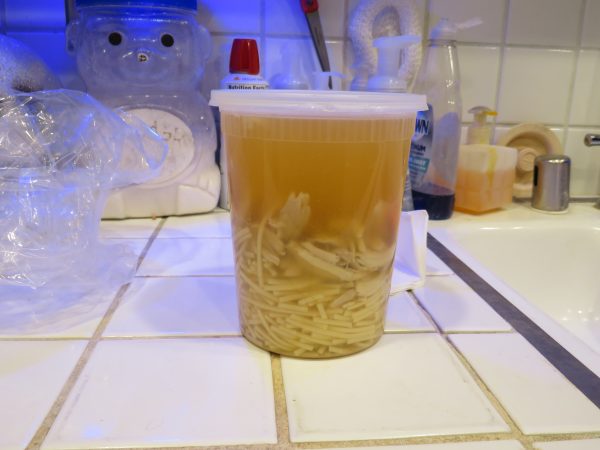 Luckily, I took some home to enjoy later.

In case you were wondering who I’m voting for. 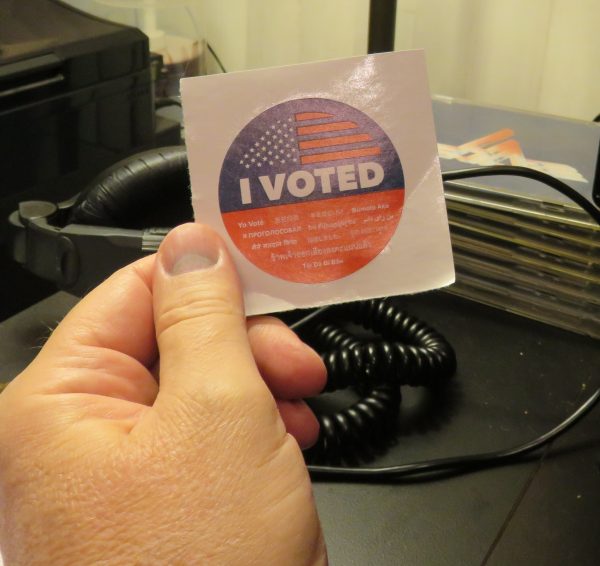 Damn right I did!

I also pulled another clip from our Radio/TV class project “Summer Safety Tips for Kids” with my replica Muppets.