Here’s another adventure from my pal Meth-Head Seth, who just heard that Oregon recently legalized all sorts of things he likes. 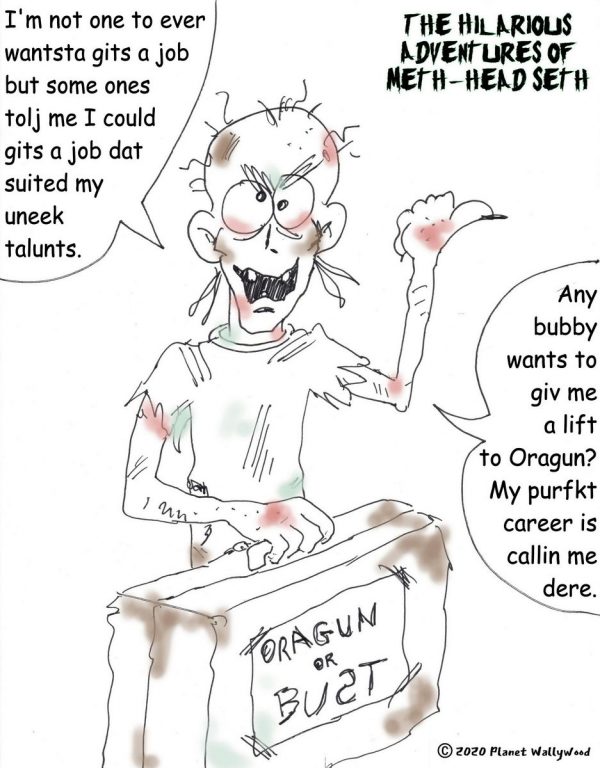 Even though it’s not really a Christmas song, “My Favorite Things” from “The Sound of Music” always seems to get played a lot around this time of year. I can’t tell you yet why this song has been running around my brain, but here’s a great version by The Supremes from 1960!

Monday the 30th – MICHELLE RETURNS! – My Florida friend Michelle was flying in later, so I ran a few errands to get ready for her arrival. I hit my mailbox to get my packages, and I loaded up on groceries at the store. I got home and worked around the house. Just before I left for the airport, Michelle texted me that she was on the ground, as her plane had arrived about a half hour early! Yikes! I hopped in the Mustang and sped to LAX. We got back to Planet Wallywood and she told me all about the amazing hiking trip she just enjoyed with friends in Utah. I recorded a bunch of auditions and typed out Wally’s Week.

Tuesday the 1st – TUESDAY CHILL! – It was a fairly lazy day around Planet Wallywood. Between her intense Utah adventure and the 3 hour time difference between Florida and California, Michelle was content to just relax. And I’m always up for relaxing! She’s a model and actress who is planning a move to LA very soon. Luckily she has a job where she can be transferred to LA with very little problem (she just has to request it) so she’ll be coming to Hollywood with a job in hand! Then when the entertainment industry opens back up she’ll be ready to hit the ground running. While I was doing my usual nightly auditions, she watched with great interest. I spent some time with her breaking down each audition so she could learn what to expect if she decided to sample the world of Voice Acting. I’ve never been a mentor before, so it was kind of nice getting to share some of my experiences with a young person just starting out. Amazingly enough, one of the auditions I received also had a part for a girl in her age range with her type of energy. So we laid down an audition just for fun. But the results were so good I sent it on to my agent and asked her opinion. Why not, right? I prepped for a VERY important session I had on Wednesday afternoon. We made a couple of Tombstone pizzas – she took the pepperoni off of her pizza and put it on mine, while she put some of the freshly cut pineapple I bought at the store the day before on hers. Then I covered my ‘double pepperoni’ pizza with sauerkraut and we ate and watched an episode of “The Mod Squad.”

Wednesday the 2nd – HOLLYWOOD CALLS! – The agent to whom I submitted Michelle’s audition responded and said she loved the audition and was going to submit her! I did a last-minute audition for a Sundance channel promo, and then set up for my VERY important session. I got cast as the voice of a legacy Hanna-Barbera cartoon character, and I was elated! I’ll write more on that later when I’m able to talk about it. But suffice to say, I had a LOT of fun! And being the voice for this legendary, iconic character was a huge honor! Michelle and I sped off to a grocery store to grab a few items, including a pumpkin pie and some Cool Whip – which we both love! We got some food to go at Chin Chin and came home to enjoy our dinner and yummy dessert. Later I did my nightly auditions, and found another piece of copy that required the voice of a young cheerleader. Michelle was a cheerleader for 8 years when she was in school, so here was a SECOND audition that fit her type perfectly! We recorded it and sent it in to a different agent. Hopefully she’ll get submitted. The audition was VERY funny! I did some work around the house, and then we made some food and I showed her Laurel and Hardy’s comedy masterpiece “Sons of the Desert!” My only requirement was that we HAD to wear our SOTD fezzes while watching!

Thursday the 3rd – WONDERFUL WEIRD AL! – Last week I called around to various record stores to find a “Weird Al” Yankovic vinyl LP for Michelle’s Christmas gift. She had a copy of his “In 3-D” album that had been signed generically. But I wanted to get her an LP that was signed for her specifically. As luck would have it, the owner of Atomic Records in Burbank had just gotten in a pristine copy of “In 3-D” that morning from an estate sale! I grabbed it and mailed it over to Al, who told me via e-mail that he would sign it and send it back. (I’ve known Al since 1985, and he’s a prince among men!) Though it arrived within a day at Al’s, the post office was taking their sweet time with its return. Luckily, one day before Michelle’s departure, the album arrived at my box. She cracked it open to find a signed, mint-condition “Weird Al-bum” personalized to her. Just in the nick of time! We got lunch at Burger King, and then I took her shopping at Foam Mart so she could get some foam rubber to start working on a puppet project. She wanted to visit the famous store It’s a Wrap in Burbank, so we headed over. She found an amazing knit dress that fit her perfectly (marked down 75%!) and I found a great pair of bunny slippers that fit ME perfectly! I took her by the Christmas House in Burbank, which is one of my favorite annual traditions. It’s a house owned by a Hollywood lighting professional, and he has created a fantastic presentation of dancing lights on his house, synchronized to great Christmas songs. The songs are transmitted on a low-power FM station in his house, so you can sit in your car and listen to the music while you watch the lights dance. I was ELATED to find out that he added a new song to the line-up this year – Andy Williams’ “It’s The Most Wonderful Time Of The Year” – my FAVORITE Christmas song! The light show he created to this song was stellar – I feel it’s his best work so far! It’s dynamic and exciting, and I can’t wait to go back again and see it a few more times. We got home and I fed the kids. Michelle had to write a report for a class she’s taking, so she sat at my computer typing it out while I relaxed on The Most Comfortable Couch in the Universe. A second agent of mine responded to Michelle’s cheerleading audition and said it was great, and she would be submitting it! TWO auditions for her, and she doesn’t even officially live here yet! Pretty sweet! I did some work on editing a special video I’m going to release toward the end of the year, and then we made some soup and sandwiches and watched another episode of “The Mod Squad.”

Friday the 4th – FRIDAY FLIGHT TO FLORIDA! – After walking to Rusty’s to pick up some treats for Roxy, Michelle and I got a few pizzas at Domino’s. She packed up her stuff; her foam rubber for her puppet project and her “Weird Al” LP, and got ready to travel back home to Florida. I took her to the airport for her evening flight, and then I came back home to clean up and rest.

Saturday the 5th – GHOST? NO GHOST!? – The mental midgets who run this city and state have decided to close us down again. Don’t get me started; I could go on for days on what idiocy this is. But this was the last day my stylist could accept clients in the salon. So I went over to see her to get a touch-up on my color. I came home and constructed a pull-tab puppet for a Cameo video I was assigned to do. I shot some more video segments for my end-of-year video and then took some “Christmas Nappies” on the couch – which includes Christmas music playing softly on the satellite, Spook in his perch by the fireplace, Roxy in her beanbag, and me napping on The Most Comfortable Couch In The Universe” underneath my heated blanket. I woke up to an odd sound coming from my kitchen. I initially thought Spook was wandering around and knocked something over. But I looked over to his perch and he was there – staring up at the kitchen with a puzzled look. Roxy was in her bean bag sleeping. Was it some sort of ghost activity? I went upstairs to the kitchen but couldn’t find anything amiss. I thought it might have been my Goofy Grape pitcher, which sits on a shelf on display. It sounded like somebody hit it and made it wobble on the shelf. Curious. It wasn’t until later when I discovered the REAL cause! Earlier in the day I had placed a can of A&W Cream Soda in my freezer, so I could get a shot of it for my end-of-year video. I forgot all about it being in there. So when I opened my freezer door I discovered that the can had inflated on the top and bottom (luckily it didn’t burst!) and when that happened it ended up rocketing around the inside of my freezer! That was obviously the noise I heard. Later I did some auditions, and made my traditional Saturday Night Super Saint Salad and watched another terrific episode of “The Saint” starring Roger Moore!

Sunday the 6th – CAMEO CRAZINESS! – It’s been 9 months since my pal James has been over to Planet Wallywood. That’s how long it’s been since my Saturday night movie nights have been canceled due to the virus thing. It was great having James stop by, going out to grab a pizza at Barone’s, and sitting around Planet Wallywood catching up. Since he’s real good at stuff like this, he was kind enough to put a new locking door knob on my Puppet Room door. Later I shot my Cameo video, which was a Christmas present for a guy named Craig. In case you aren’t familiar, Cameo is a company that facilitates video messages from actors and media personalities to customers who purchase them. It was a fun video for this guy who’s a huge Riddler fan. I turned a picture of his face into a pull-tab puppet so he could interact with me in the video. It was a boat-load of fun! I hope he enjoys it! I love doing these! 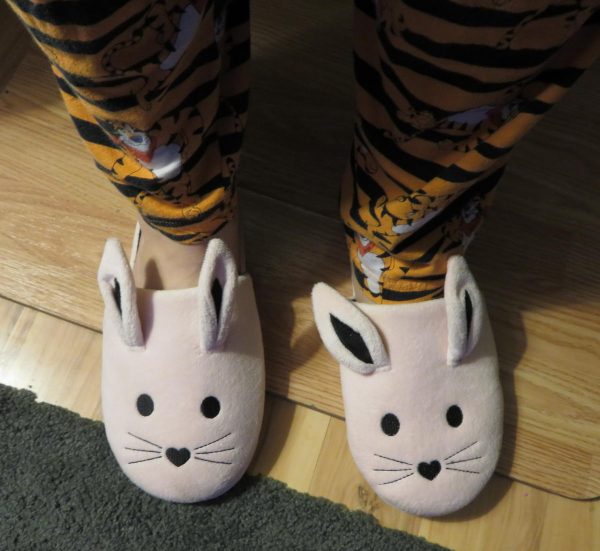 Hard to believe I found a pair of pink bunny slippers that actually fits me! It’s a Wrap is amazing! 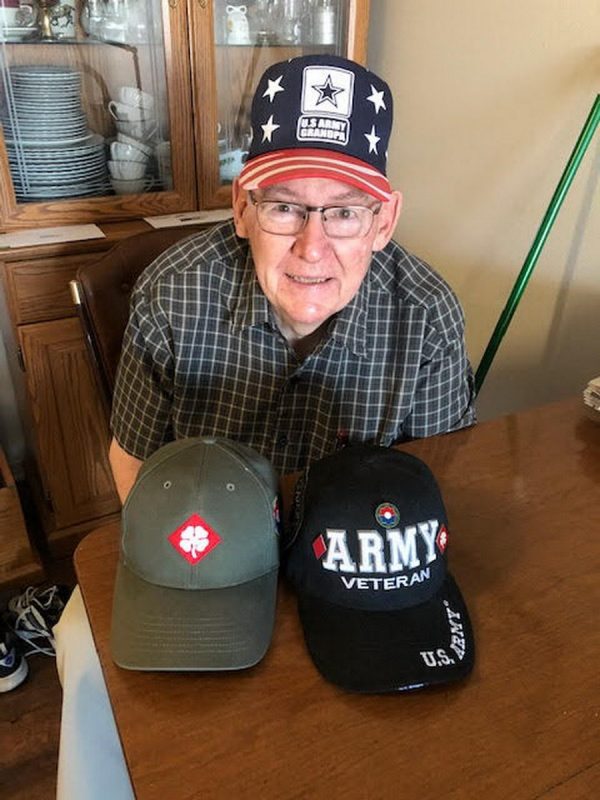 My dad poses with his Army caps! He was wearing one in a restaurant recently, and some nice person bought his lunch! 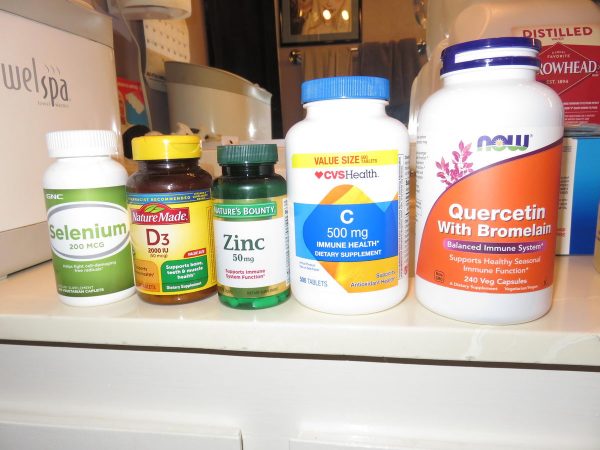 Wanna stay healthy amid all the virus craziness? I fully recommend that these supplements be taken daily! 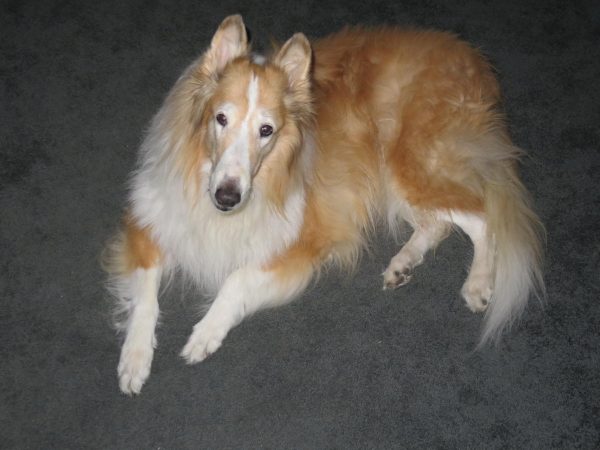 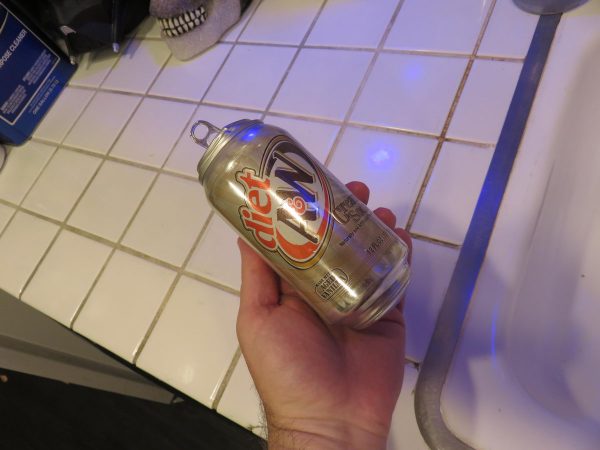 Nope. Not a ghost. Just a forgetful idiot who forgot to take the soda out of the freezer. 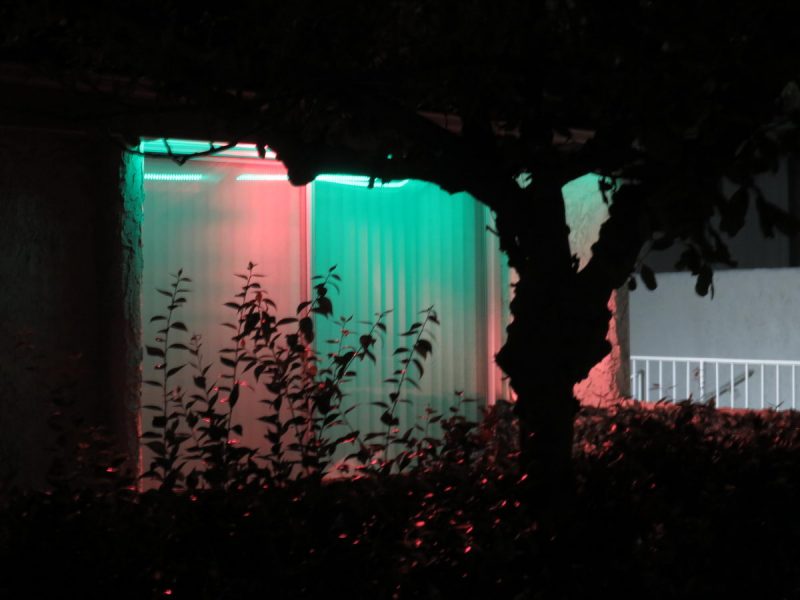 This is the best I can do for Christmas decorations on my patio. Yup…I’m lazy 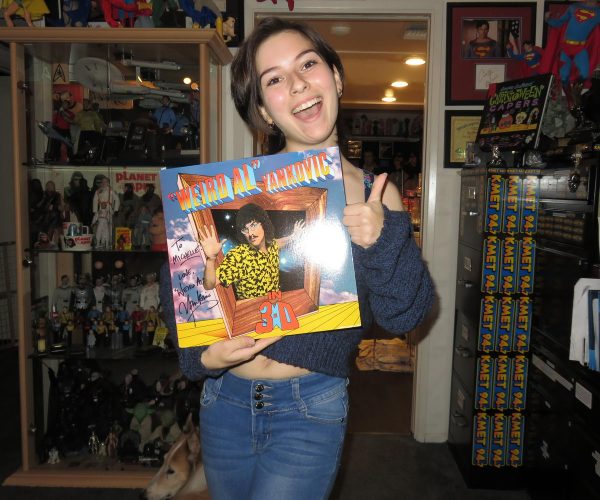 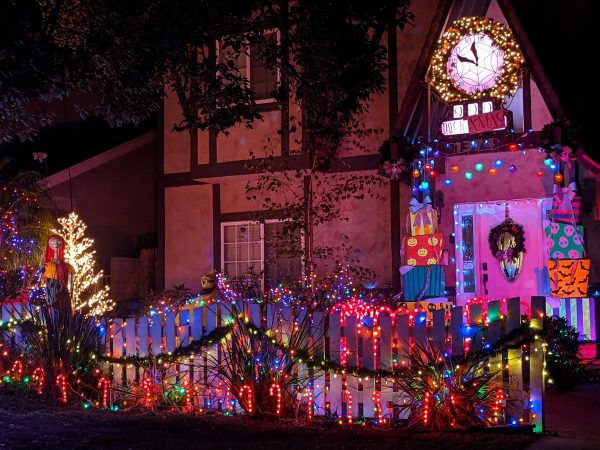 While driving around Burbank Michelle shouted, “LOOK! A Christoween house!” 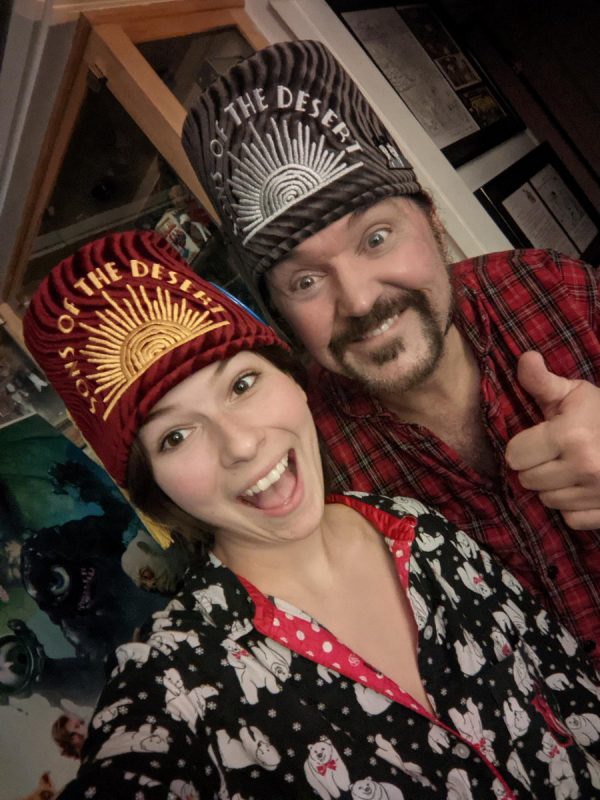 A Sons of the Desert pajama party! With fezzes!

I like to put together little mini-tours of the rooms in Planet Wallywood for the folks on Twitter. Since they have a 2 minute and 20 second limit on videos, I edit them to fit. Here’s a look at the Aisle of Art and The Puppet Room.