This meme makes me laugh HARD! 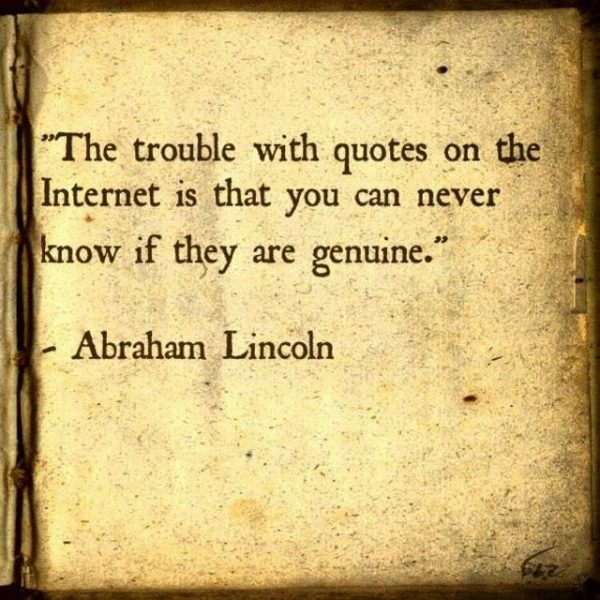 As I was in Michael’s crafts plotting out my new framed KABR collage, the overhead music system played so many great tunes, I thought they had somehow found my iPod! This one was especially a treat! “Waiting For a Star To Fall” by Boy Meets Girl has always been one of my favorites! It always brings a smile to my face.

Monday the 15th – MELLOW MONDAY! – As I hung out around the house all day, it was fun getting some work done. I arranged some details for a session on Tuesday at Voice Trax West, and I wrote a little bit of Wally’s Week. I met my friends Pat and Jamie Evans for dinner at Paty’s and we chatted about a lot of fun upcoming projects. When I got back home I finished up Wally’s Week and recorded my nightly auditions.

Tuesday the 16th – SAUCONY SUCKS! – On my walk to Voice Trax West, I noticed that I was developing a sore on my left heel. I had just bought these shoes a few months ago, and already there was a problem. Come to find out the lining of the left shoe wore out fast, and the torn material was bunched up and rubbing on my heel as I walked. It was getting sore, but I made it to Voice Trax West for the session. On the walk back home after the session, it was getting very sore and affecting my gait. I stopped at Big 5 on the way home to ask them if this was normal. It’s where I bought the shoes a few months ago. They were shocked that they wore out that fast, and I wanted to buy a suitable replacement shoe, but they didn’t have anything I liked. So I put a folded up napkin in the shoe and hobbled home. I’ve never heard of the brand Saucony before, but I’m not impressed. While old pairs of running shoes I’ve purchased have lasted years, this pair didn’t even last months. Very cheesy and it’s the last pair I’ll ever buy from this company. Once I got home I took out an Exacto knife and I cut away the wrinkled up, torn fabric. I glued down the remaining fabric and let it dry. Hopefully this will do the trick for future walks. I worked around the house the rest of the night and did my nightly auditions.

Wednesday the 17th – “WHAT ARE THOSE?” – The day began by meeting my new pal Aaron LaPlante at Bob’s Big Boy for lunch. Aaron’s been a Voice Actor for quite a while, but our paths haven’t crossed. It was a fun 3 hour lunch and we chatted about a lot. We even ran into our mutual friend Comedian Dana Gould! One of my first Voice Over jobs was in a show that Dana co-created called “The Super Adventure Team.” I drove over to Michael’s crafts to plot out a new framed piece I was working on. It’s the KABR piece I wrote about in last week’s Wally’s Week. When I started laying out the 45 rpm records for the collage, the young girl behind the counter said, “What are those?” There was a young guy standing next to the counter and I said, “We used to listen to songs on these. We had a bird, like in the Flintstones, with a really long beak. We’d spin these things and put the bird’s beak down on them, and sound would come out the bird’s mouth.” The guy standing next to us laughed, but the girl behind the counter didn’t know whether to laugh or take me seriously. I came home and prepped for a Voice Over session in my home studio.

Thursday the 18th – FOG FUN! – After a lot of prep in my home studio, I did a session that lasted about 45 minutes. It was a ton of fun, but like all the others I do, I’m prohibited from talking about it at all. When it’s released, I’ll be able to talk about it then. It actually took longer to fill out the paperwork for the gig, than the actual gig itself. As I worked around the house I was getting hungry for steak. I texted my pal Sara Raftery, to see if she wanted to hit the Smokehouse for dinner. I took Cookie Monster with me and we got some funny photos! Later I did my nightly auditions, and noticed that the night had gotten very, very foggy. I had a fun time walking Roxy on our late night stroll through the neighborhood. The fog was gorgeous. As is my usual routine when it’s foggy out, I was humming the sax riff from “Baker Street.” After I took Roxy back inside, I grabbed my iPod and walked around by myself at 4 in the morning listening to “Baker Street.” It’s amazing! I came back inside and made some spaghetti, heated up some leftover garlic bread from the Smokehouse and watched a few episodes of “The Lone Ranger” before bed. Since I wasn’t doing anything on Friday, I gave myself permission to start the weekend early!

Friday the 19th – FOGGY FRIDAY! – Not only was the weather foggy, but my brain was a little foggy as well. So I just chilled around the house all day to relax. I ate my leftover spaghetti and just checked my brain with some mindless activities. I trimmed the fur pile on the tips of the fingers of my Cookie Monster Muppet replica. I did this so the finger tufts would fold over more completely. Then I got out a large needle and picked the fur pile out of the seams on his fingertips. I set up next week’s Christoween social media posts, and drove over to Denny’s to get some food. After a long delay, they finally got their fried chicken back in. They didn’t have any for a long time! I watched a few “Lone Ranger” episodes and enjoyed my Denny’s dinner again!

Saturday the 20th – MONTY THE PYTHON! – On Instagram I saw a nice pistol advertised that I really wanted to look at. It’s a brand new .357 magnum Colt Python. They haven’t made Pythons in a long time. Come to find out, they started again in 2020, but there were some problems with them. But this model from 2021 seems terrific. It’s not a very practical weapon for self-protection, but it’s definitely a nice piece to have as an investment. The Colt Pythons from the 70’s are now going for somewhere between $5,000 and $8,000. WOW! I drove over to the store to look it over, and decided I was going to pick it up. In California we have a 10 day waiting period before I can take possession of it. They call it a ‘cooling off’ period. Which doesn’t make much sense since I’ve been collecting guns for 20 years and already have a big collection. Oh well. I’ll go pick it up in a week and a half and name him “Monty.” I got some food at Panda Express and then got some groceries. I came home and caught up with a few out-of-town friends on Instagram Direct Message. I paid a few bills, did an audition, and later I made my traditional Saturday Night Super Saint Salad and watched an episode of “The Saint” before bed. It was a really good one!

Sunday the 21st – TECH SNAFUS! – There’s nothing like going outside to enjoy a balmy 80 degrees on a November day! It was stunning. I did some work inside with all the windows open. But I noticed that the sun outside wasn’t the only thing running hot. My computer was boiling! It was very unlike it, as it normally runs very cool. I got a flashlight and looked at the back of the CPU and noticed that the fan wasn’t running. So I immediately shut it off so it could cool down. When I turned it back on about a half hour later, the fan started back up and everything was running normal. Odd. Later I was supposed to meet a lady that was recommended to me by a friend. We had arranged to meet at a restaurant at 7. When I got out of the shower I checked my e-mail before I left for the restaurant and she had emailed me to see if we were still on. I don’t ever flake without an explanation, so I wrote back and told her that I’d still like to meet. She asked if I had gotten her text from earlier and I said I hadn’t. I had been checking my phone on the off chance that she needed to postpone or cancel. But nothing. However, while I was in the shower she sent a text to confirm. But my new phone hadn’t given me any indication that I had a new text message waiting; no little icon to inform me that I needed to check my text inbox. Rats. By the time we connected she had already ordered delivery food thinking that I flaked. I need to call the company that makes my new phone and ask them if there’s a glitch in these phones that don’t always post the icon when I have a new message. I checked my inbox and sure enough, her text was there. I just hadn’t been notified by the phone that I had a message. More techno glitches to ruin my day. I did some prep for a long session on Monday, and did my nightly auditions. At the end of the day I got a great e-mail from the producer of the Seasons Screamings convention in Pasadena in December inviting me to get a table at the con to promote Christoween! This is fantastic! He even gave me a discount because he felt that my project would be perfect for his audience. So, I happily agreed and it looks like I’ll be spending three days in December at a con promoting Christoween! This will be great! A wonderful way to end the week!! 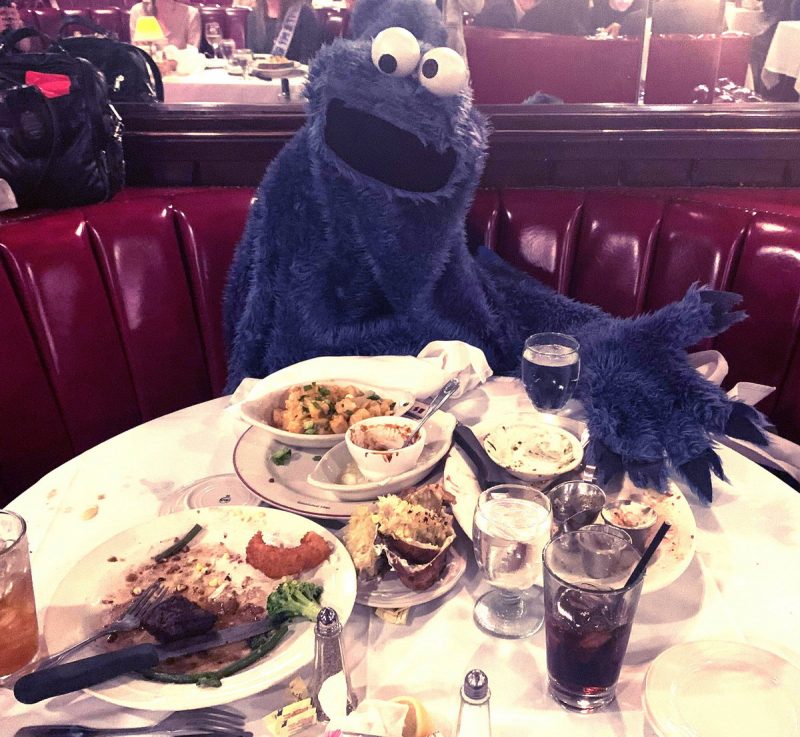 Cookie Monster had a GREAT time at the Smokehouse. With all that great food, who wouldn’t? 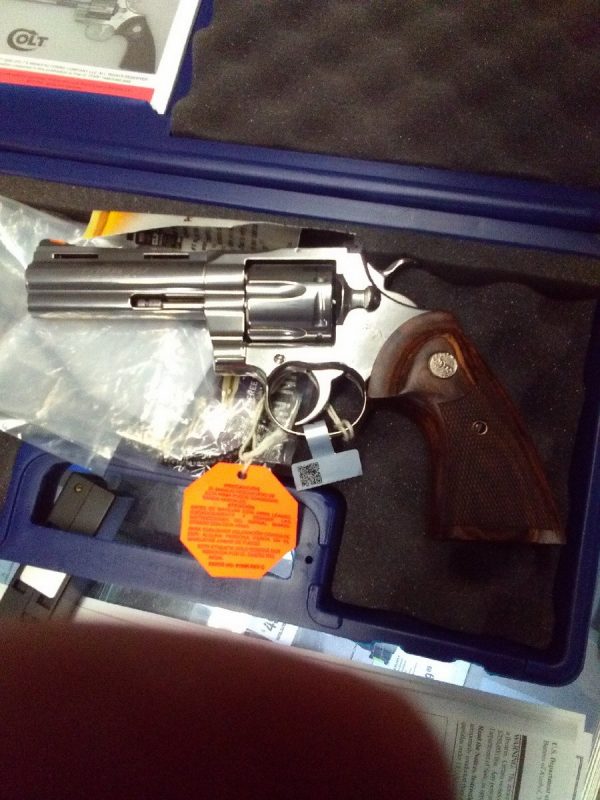 I had a lot of fun listening to the A side of the new Electric Light Orchestra Greatest Hits album. Unfortunately I don’t believe it to be the original masters from the 70’s and 80’s, but rather redone versions by Jeff Lynne. I know the originals so well, and there are slight differences in the mixes of these songs, plus they seem like they’ve been “sped up” so that more songs could fit on the side of an album.