I hope these guys have fun in space at the International Space Station! 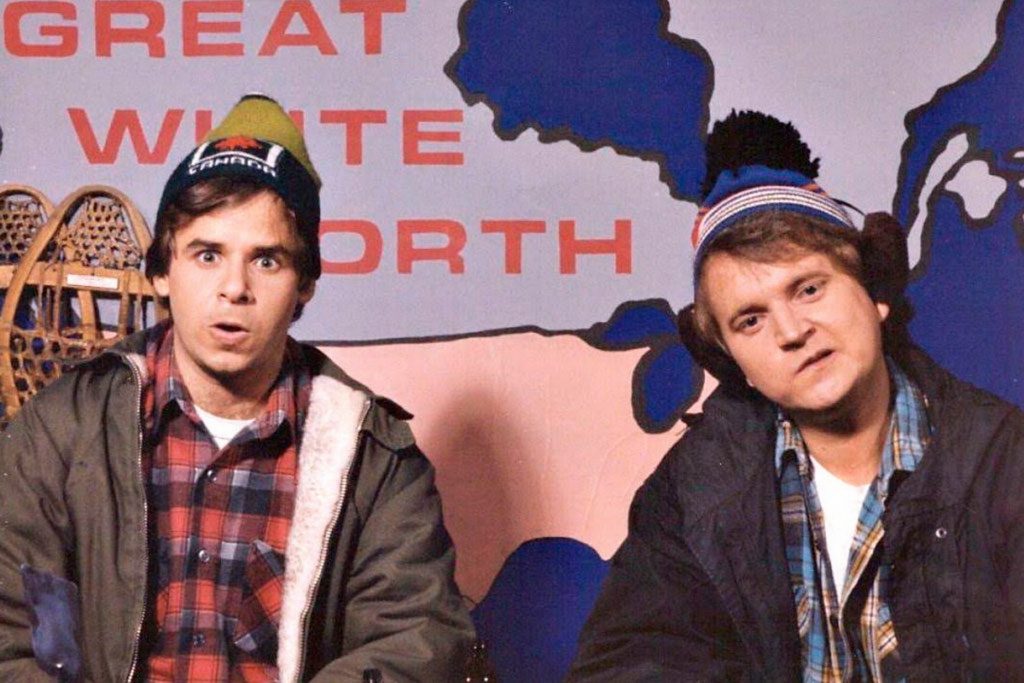 I had an audition this week that asked for an “80’s type singer” and it was a parody of Van Halen’s “Runnin’ With the Devil.” So of course, I had that on my mind!

Tuesday the 26th – B.D. OUT – G.G. IN! – My chiropractor suggested I get an exercise ball to stretch over to loosen up my spine. He seemed to think this would help the chiropractic issue I’ve been having with a few numb fingers on my left hand. So I picked up one at Big 5, using curbside service. Then I went to CVS to get some supplies, and I headed to Alex in Wonderland to pick up the finished head covering for my “Beautiful Day monster” puppet, and drop off the head for “Green Grover” so Alex could create a head covering for it. I stopped by KFC to get some lunch to go, got some groceries, and then came home to put them away. I answered a few e-mails, texts, etc. I did a little work and then grabbed a short nap. I got up later to feed the pets, but Roxy didn’t eat. I guess she wasn’t feeling very good. I laid around and basically did nothing but relax.

Wednesday the 27th – “GLUE” ARE TOO LATE! – Even though I wanted to be up in time to drive to Foam Mart to buy some more Barge Glue to work on “Beautiful Day,” I overslept and missed the window of opportunity. Because of the virus thing, they’re open but with limited hours. So I did some work, recorded some auditions, and cleaned off the kitchen table to prep for tomorrow’s puppet gluing. I put the “B.D.” head in the cabinet in my bedroom where he will eventually live. He looked great, but he turned out much bigger than I thought. It was a cool evening, so I napped on the couch. Then I got up to do tons of auditions. I fed and walked Roxy, then I drove to Denny’s to get some food. I prepped some mail items to be mailed off on Thursday. I ate my Denny’s and watched another episode of “The Invaders.”

Thursday the 28th – A REAL STORE! – I made sure to get to Foam Mart before they closed to get my Barge Glue and thinner. And across the street I noticed that Hobby Lobby was open for business! I hadn’t been inside a real store for over two months! It was great shopping and buying items like the old days! I got some food at the Burger King drive-thru and headed to my mailbox to get my mail. I dropped off my mail at the post office, and went to my favorite cigar store to pick up a few Montecristo cigars. I came home and mixed a few of the paints I bought together to do some paint tests on the fur for “Green Grover.” I dug out my glue and attached the fur covering on to “B.D.’s” head – first on the top, then the back, and then the sides. I let them dry for a while as I napped. I got up later to feed and walk Roxy on a gorgeous overcast night. I glued the rest of the fur to “B.D.’s” face, which took some intricate sizing and cutting. I also trimmed some of his fur shorter to obtain the look I wanted. I made some spaghetti and watched another “Invaders” episode.

Friday the 29th – RESTRICTIONS LIFTED! – Shortly after I woke up, I learned that the restrictions on visiting restaurants and hair salons had been lifted overnight! As luck would have it, I had an appointment scheduled with my stylist on Saturday! But after talking to her she said she didn’t have all the supplies she needed (PPE) to open properly. She said she would squeeze me in next Saturday. I also called The Smokehouse to see if I could get reservations to have a steak that night! I got the last reservation! WHEW! What luck! I’d be enjoying a tender filet mignon later that night! I couldn’t wait! But not all news was good. I found out that my pal Bruce Kulick’s brother Bob passed away at his home in Las Vegas. Very sad. I did a little work and waited for the maids to arrive. I had a few fun phone conversations while they worked, and when they finished I got cleaned up and fed the pets. I drove to my chiropractor’s office for an adjustment, and then I went to see Alex at Alex in Wonderland to get “B.D.’s” body attached to his head. When he was made whole, I would work on him over the weekend to add his eyelids and eyebrow. He’s darn near finished! I also dropped off the nose pieces I wanted to use for “Green Grover.” She showed me a fur coloring technique she did which turned out MUCH better than the ones I tried. She stitched “B.D.” up and off I went to the Smokehouse to meet my friends Officer Mark and Miss Connie! There weren’t hardly any people there (part of their new spacing regulations) but the food was delicious! Much like shopping in a real store the day before, it was great to dine in a real restaurant again! I got home and set “B.D.” up with an improvised support rod and stand. I still need to do a bit of work on him before he’s finished, but I’m definitely in the home stretch! I grabbed a short nap (with a full tummy) and got up later to feed and walk Roxy. As we strolled through the complex in the middle of the night, I also enjoyed one of my cigars. I came inside and made a Chef Boyardee pizza and watched “The Invaders.”

Saturday the 30th – QUARANTINE? LOCKDOWN? – – CURFEW??!!! – Just as I was excited about shopping in a store again, and eating in a restaurant again, trouble had broken out the night before in L.A. and riots and protests were everywhere. This caused the leadership of L.A. to issue a curfew. Nobody could go out after 8pm. Good grief, what next!? I guess the virus fear is over. How quickly things change. I waited for night to fall so I could work all night on “B.D.” and do some other work. I grabbed a short nap, and then got up at midnight to work on the puppet. I worked until 7am, with only a short break in the middle to feed and walk Roxy. Wow! Time flies when you’re having fun! I made my traditional Saturday Night Super Salad and watched another episode of “Space 1999” before bed. I’m sad to say that it’s devolved into basically a really bad Saturday morning kid’s-type of show.

Sunday the 31st – SNOOZY SUNDAY! – Later in the afternoon I woke up, saw a little bit of the news and decided to turn it off. I fed and walked Roxy, did a little work, napped, and then got up later to design the plans for “B.D.’s” support rod and stand. I e-mailed the plans over to my pal Kyle at Plastic Depot so he could get working on fabrication. I was feeling a bit blah, but I wasn’t going to let it get me down. I laid back down on “The Most Comfortable Couch in the Universe” and slept until dawn Monday morning. 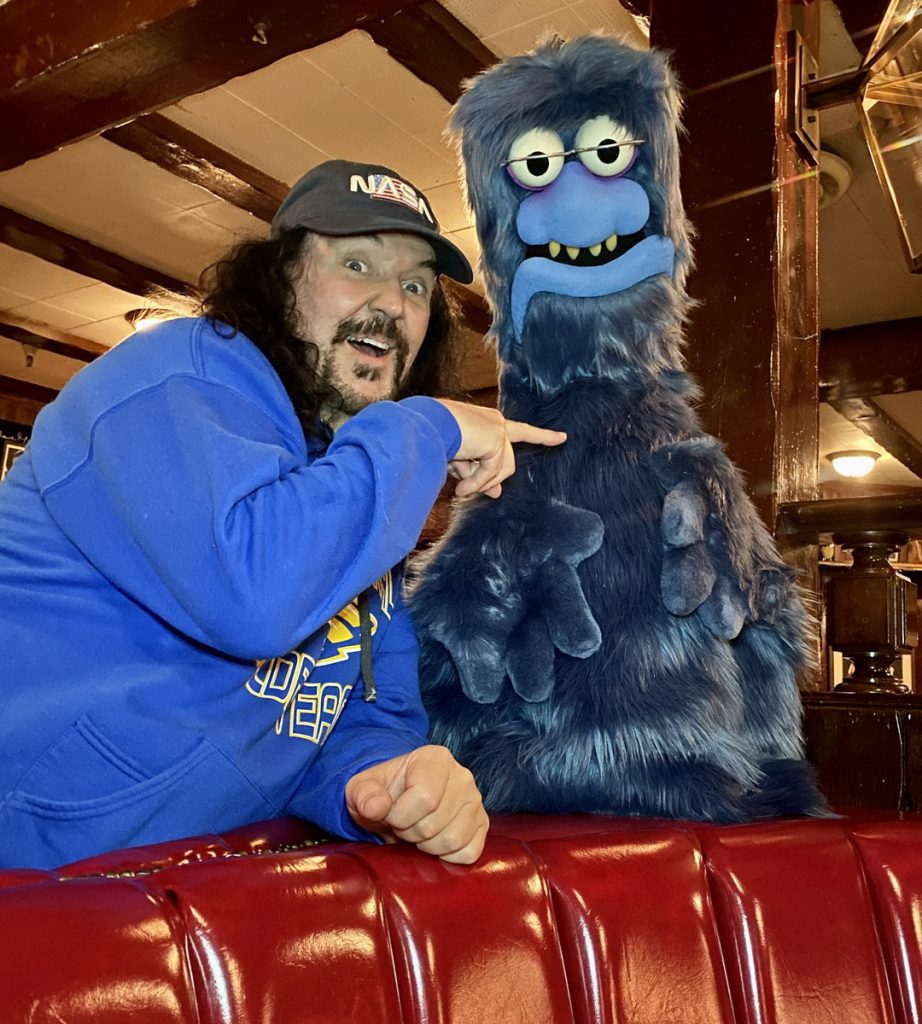 Since I had just picked up “Beautiful Day Monster” at the fabricator’s, I brought him in with me to the Smokehouse for a quick picture! 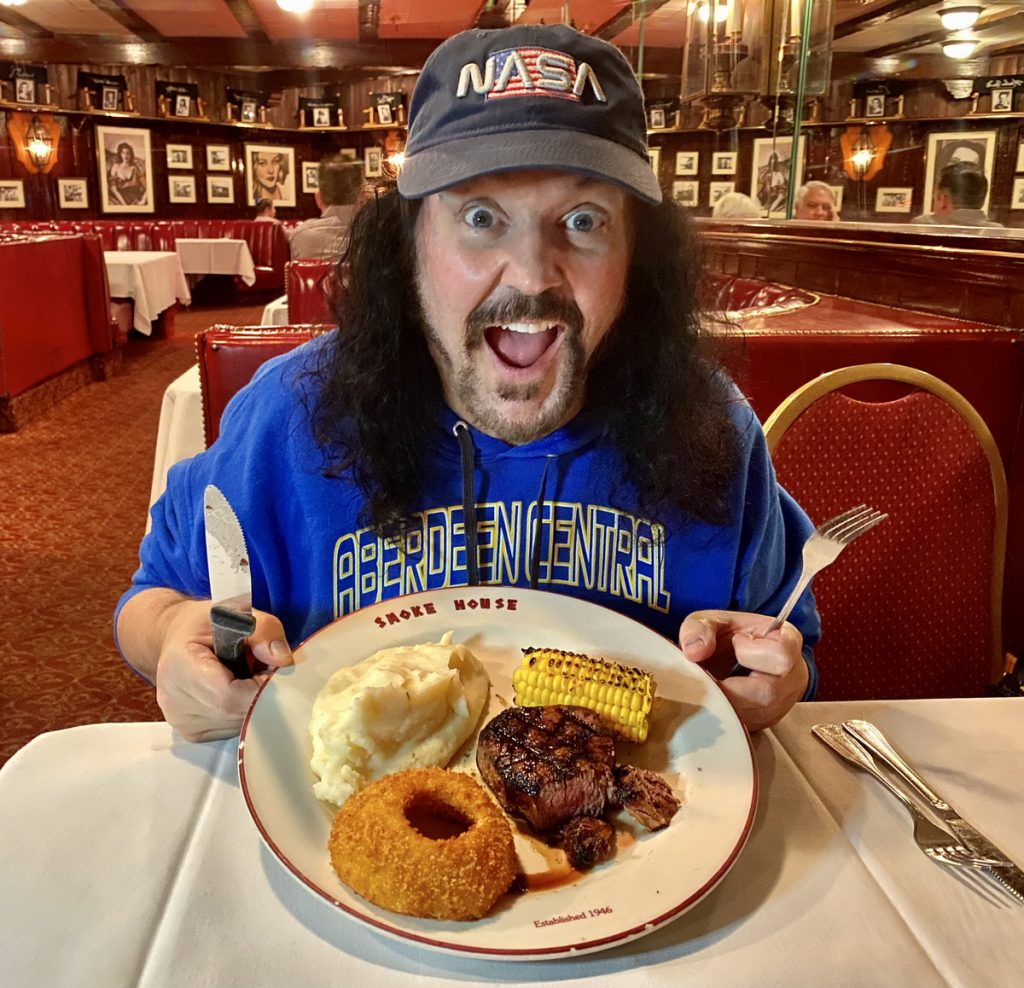 The food looked amazing, and tasted even better! 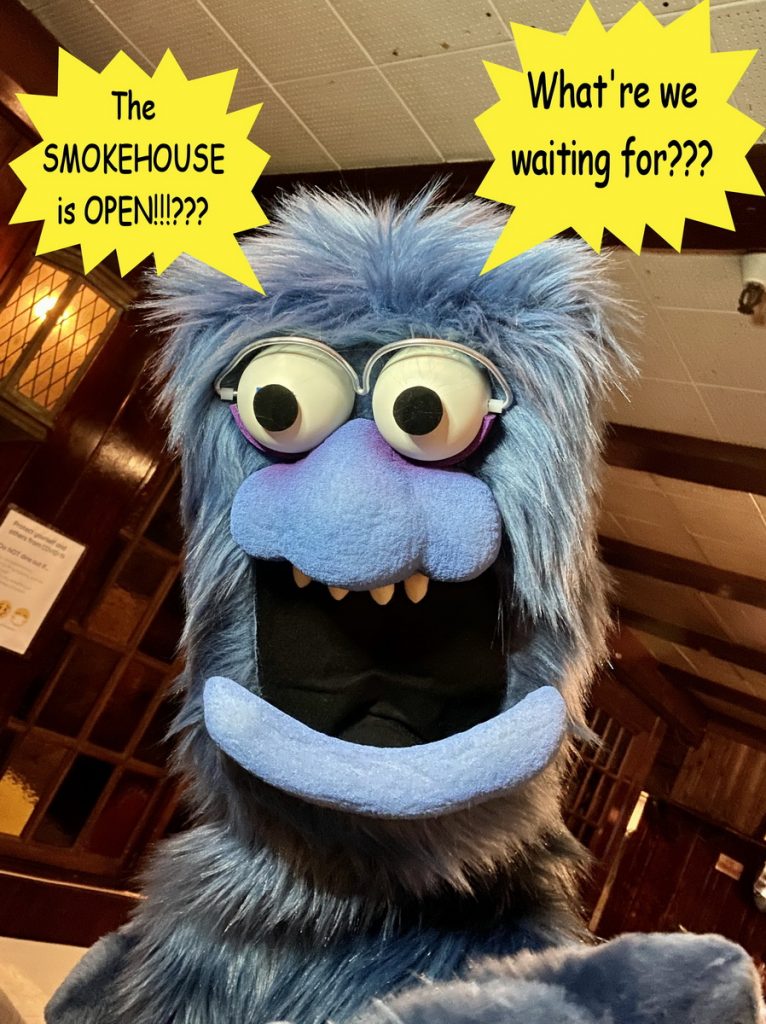 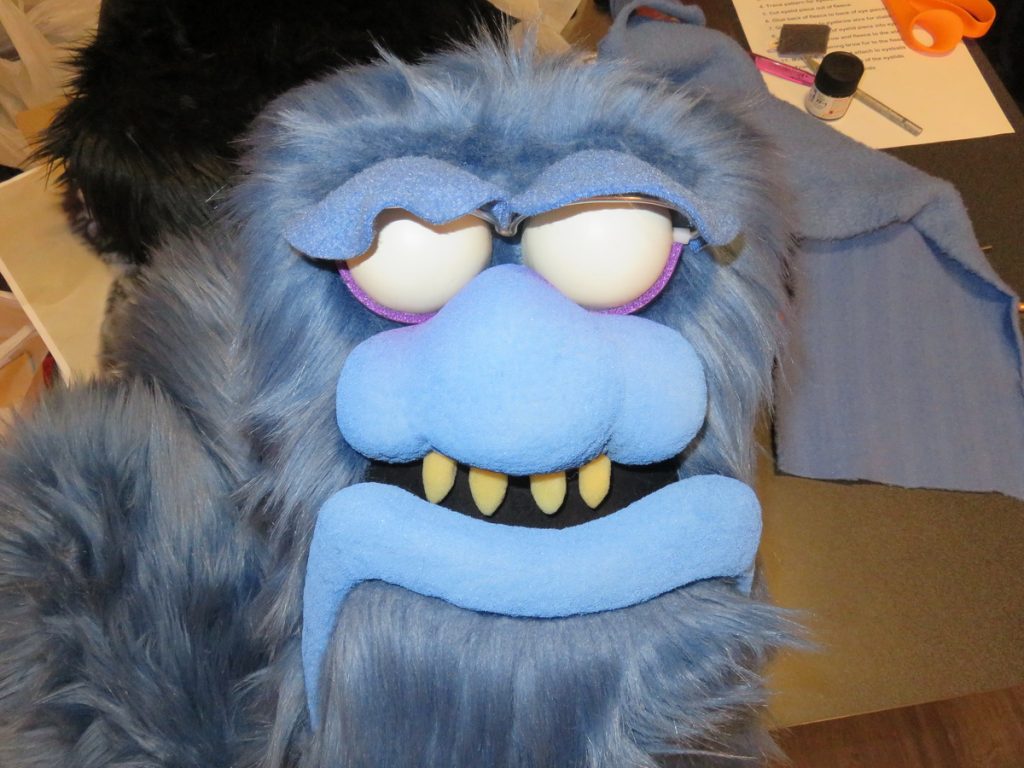 The fleece eyelid gets attached to the puppet… 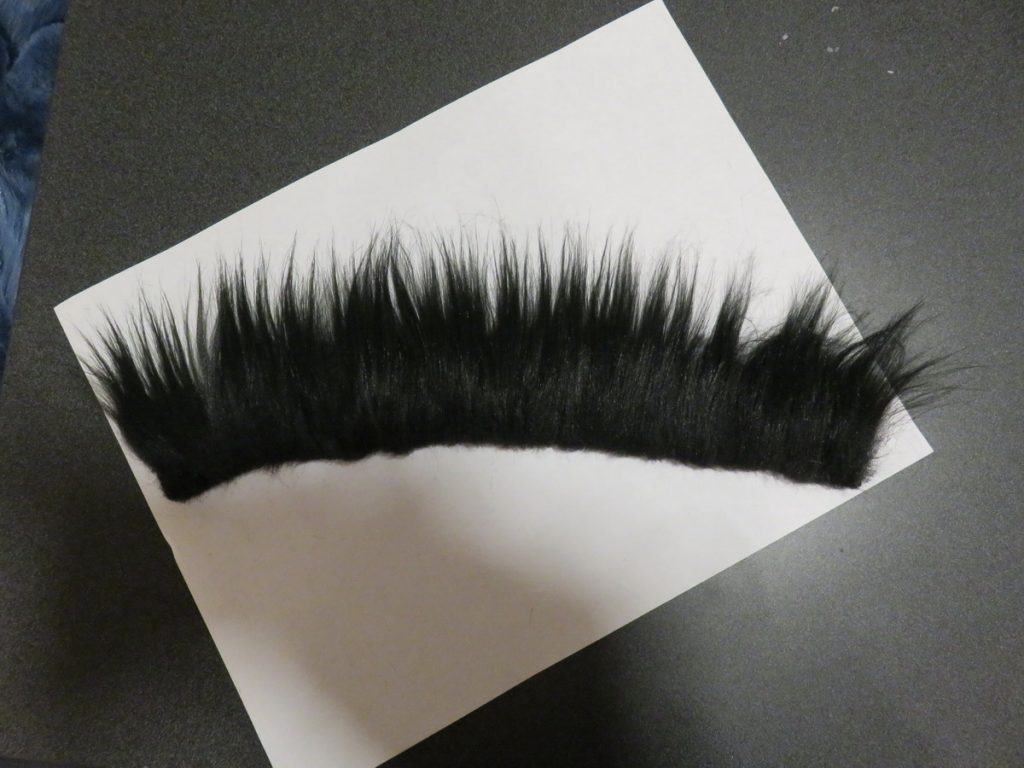 …then I cut the eyebrow… 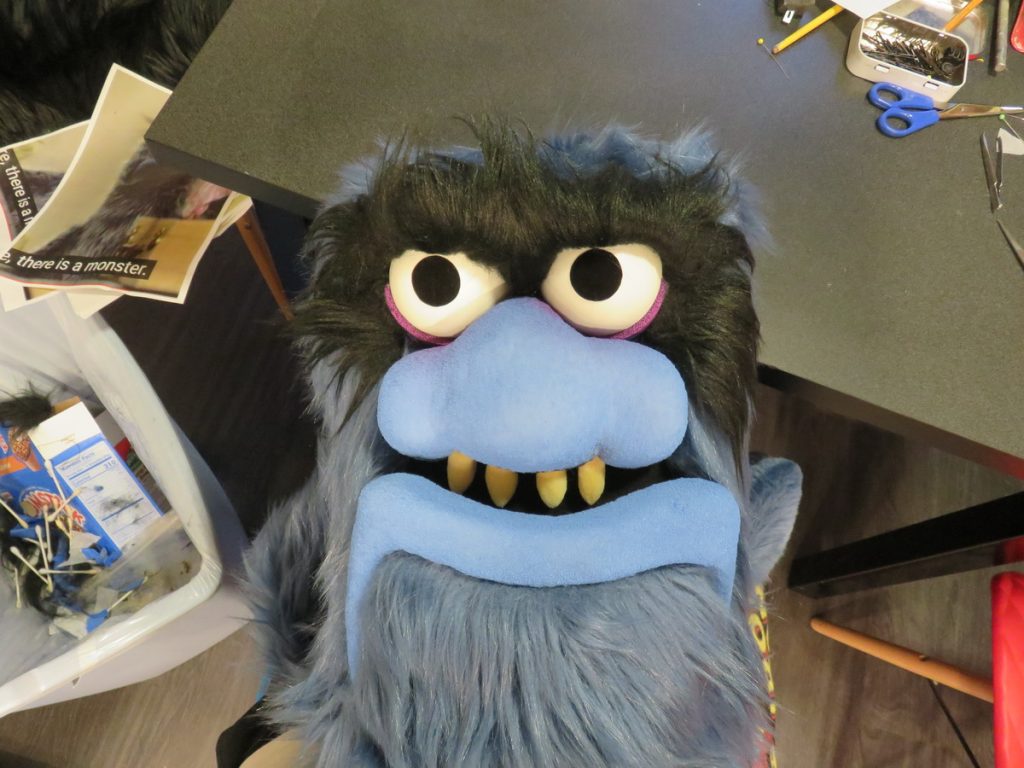 …and after hours and hours, it’s all put together! 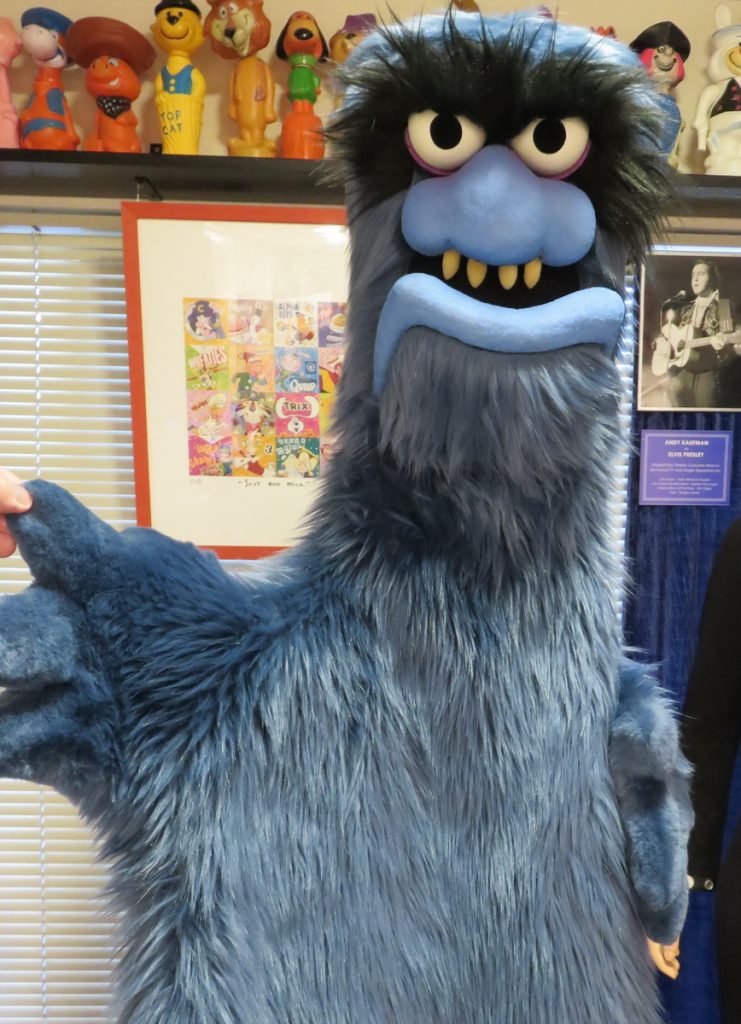 Even though there’s still more to do, he’s looking pretty good! 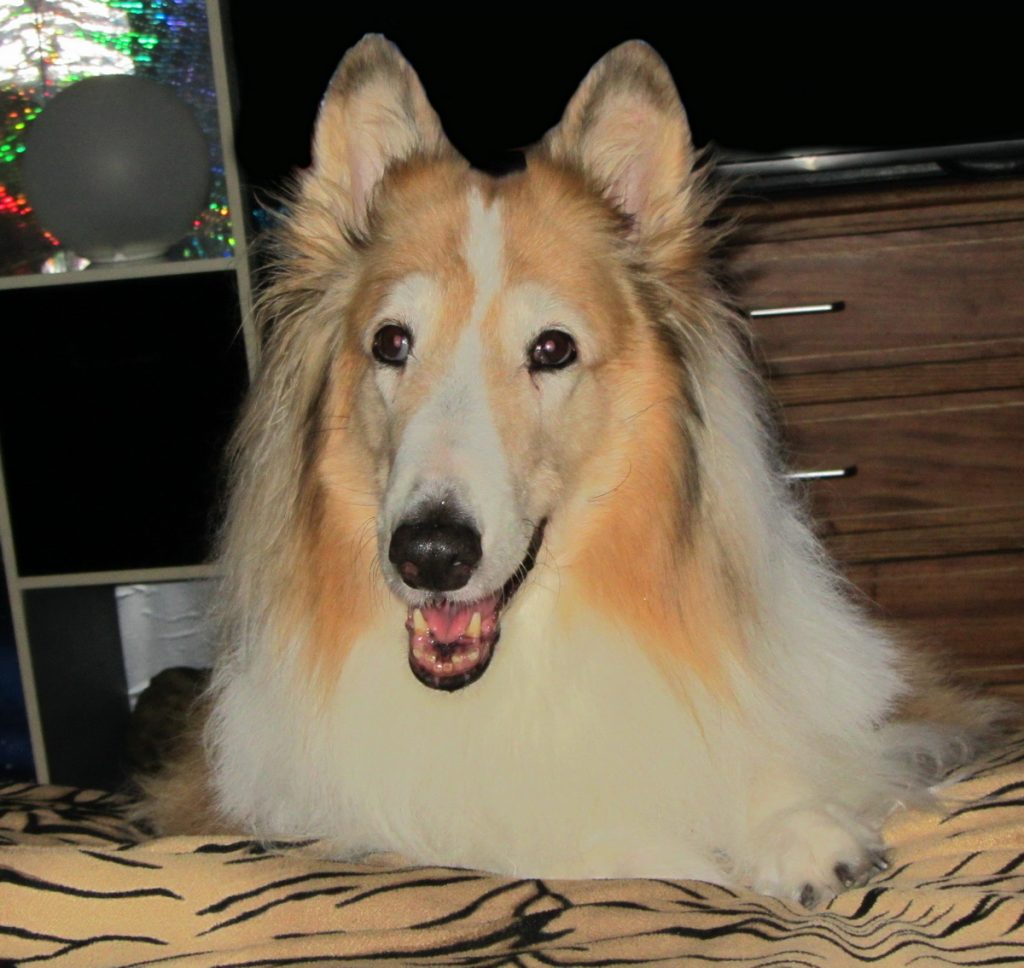 Since Roxy’s now 12, she can’t really jump up on my bed as easily as she used to. But when she wants to come up she’ll put her two front paws on the end of the bed and smile at me, until I pick her up and put her on the bed.

I felt like doing a little video with the “Beautiful Day Monster,” even before he gets his eyebrow trimmed and shaped. I’m LOVING this guy!