This is a picture of little Carlos Cordoba who passed away a few months after a long, horrible battle with cancer. I’ll have this picture at my table at the Voices Against Cancer event on Saturday July 9th in Sioux Falls. I’ll be signing in his memory. 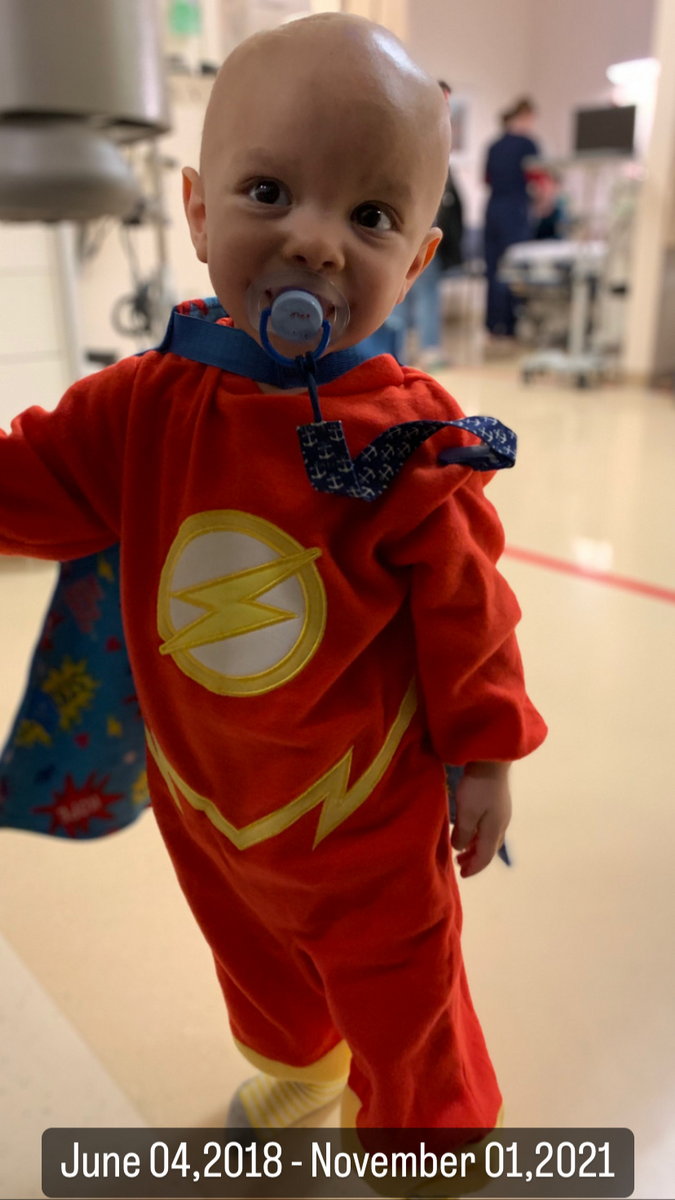 As I was driving back from Bell Gardens the other day, enjoying the afternoon, Neil Diamond’s “Solitary Man” came on my iPod. I had forgotten how great this song is, especially the chorus!

Monday the 27th – THE HEAT IS ON! – Well, it’s almost July and the heat is on – at least for a few days. I was supposed to go see my pal Mike McGee to finish up the Yellow Brick Road platform we’re building for one of my display shelves, but I never heard from him. So instead I drove to the post office to mail off some things, and then sat at home relaxing with my elderly pets. I did a little work and then rested. Roxy was having a rough night, though. She was crying and whining, and was clearly in pain. She hadn’t taken her 5:30 dose of Carprophen; a prescription anti-inflammatory she takes twice a day to relieve pain and inflammation. In fact, she wasn’t eating anything. Luckily I have an appetite stimulant called Entyce. I squirted some of that down her throat, and in about 20 minutes she was interested in eating. The first thing I had her eat was the bread ball containing her evening dose of medication. If this experience taught me anything, it’s that she can NOT miss any of her medicines! I also had two pills of Tramadol left, from something she had going on back in 2019. I gave her one of those and she fell asleep and seemed to be out of pain. As she slept I moved her body to be a little more comfortable on her bed. I slept on the couch for a few hours with Roxy sleeping directly on the floor below me. That way if she woke up crying I could help her. When we both awoke at dawn she seemed to be doing much better. Thank God for the miracle of those medications!

Tuesday the 28th – STEAKS ‘N’ STORIES! – Since I was up early I did some work around the house, and then met my pal Edi for lunch at Art’s Deli. It was still very hot, but it wasn’t miserable. Luckily it was very dry and it felt pretty good. I came home to do some more work around the house, and then in the evening I headed to the Smoke House to enjoy dinner with my pal Scott (who runs a make-up supply company called PPI) and Kenny and Karen Myers – the make-up legends who made me up as Tony Clifton for Monsterpalooza. It was a fun evening (3 hour dinner!) of great food and terrific stories! I came home to grab a short nap, and then got up to do my nightly auditions.

Wednesday the 29th – BEAUTIFUL BELL GARDENS! – I was offered a Voice Over Session for a video game trailer, but a trip to the company’s Bell Gardens studio facilities was required. I was OK with that, given that the session was only going to take about a half hour, and the pay was REALLY great! It was a nice drive to Bell Gardens and I chatted on the phone with my folks. I got there early enough to get some lunch at Wendy’s and chill out. I got to the studio and checked it, we connected with the client overseas, and in 20 minutes we were all finished! I hopped back in the car and drove back home to relax with the pets. I napped a bit longer than I had expected, but apparently I needed it. When I got up I did an audition and worked around the house. I have one more session to do, and then it’s the long holiday weekend!!!

Thursday the 30th – HALF OVER! – It’s hard to believe that the year is half over. Where DID the time go? I started the day by doing an interview for a radio station in Sioux Falls for next weekend’s “Voices Against Cancer” event. I drove to Weinershcnitzel for a couple of delicious chili cheese dogs with kraut, and headed to CVS to pick up a few supplies. I headed to the Formosa studio in Burbank to do a 1.5 hour session on a video game. This is about the fifth or sixth session I’ve done for this video game, and we wrapped it up with this final session. It’s been a lot of fun! Since I was in the neighborhood, I drove to the auxiliary garage where my Gran Torino is parked, and swapped my Mustang for the Torino. Since it had been sitting for quite a long time, it was low on battery juice. I took out my jump starter and fired her right up! The Mustang has been putting in some long road hours, so I figured I’d give it a break for a while. Besides, the heat wave is ending, so it’ll be great weather to drive the Torino around! I drove home and put it on the trickle charger to make sure the battery would be completely filled up again by the next time I needed to drive it. I went inside and fed the pets and relaxed. The weekend has officially begun with the completion of that final session! I made some spaghetti, took a nap, and then got up to record an audition. Later I drove to Denny’s to get my usual order, and started in on the Blu Ray set of “The Incredible Hulk” TV series. I remember not liking this show very much when I was a teenager. First, I didn’t like that they didn’t stick to the comic book origin. I also didn’t like that they called him David Banner, and not Bruce Banner. In the comic Dr. Banner saved a young kid from a gamma ray blast. In the TV show, Dr. “David” Banner experiments with gamma rays in an effort to make himself stronger. It takes a heroic act from the comics, and turns it into something completely selfish. Also, Dr. David Banner isn’t a very likable character. I remember that being the main issue for why I didn’t like the show back in 1977. Plus, it always seems that David Banner is always having tire blowouts. NEVER LET HIM DRIVE A CAR! The 2 hour pilot movie was a bit of a mess, and I’m hoping it improves. Otherwise I’m going to abandon the Hulk series and move into something else.

Friday the 1st – PUPPET PROJECT AT PATY’S! – Starting the day I spent some time chatting with my neighbors. The weather had turned out great, and will stay good for quite a while! I met my pal David Woodruff at Paty’s, and we were joined by our friends Scott and Vickie Sebring. We’re working on a cool puppet project and we were tossing around some ideas. We talked about all kinds of things and it was ANOTHER great 3 hour dinner! I went home to walk Roxy, grab a quick nap, and get up later to work around the house and plan for a very nice holiday weekend!

Saturday the 2nd – SUPER SATURDAY! – My friend Sabrina came over and we headed to the post office to drop off some packages, drove to my mailbox to see their new location, and then we hit KFC to get some lunch. We went to Alex In Wonderland and caught up with my pal Mike McGee who would be helping me to complete my Yellow Brick Road platform. My “Wizard of Oz” Mego figures and puppets will go on that shelf, and be placed on a cool Yellow Brick Road base. We had to run out to the local Lowe’s to pick up some more threaded rod for the puppet supports. We also picked up some donuts to enjoy later! We got back to the studio to keep working on the base, but the day was getting away from us and I needed to go walk Roxy. After walking and feeding Roxy, Sabrina and I drove to the grocery store to pick up some supplies. We took a time out to get some Chinese food, and then we drove to Michael’s to get her some art supplies for some projects she’ll be working on. After a quick nap I did some work around the house, and then I made my traditional Chef Boyardee pizza and Sabrina and I enjoyed my “Laurel and Hardy Theatre,” since it was the first Saturday of the month. We watched the feature “Swiss Miss” and she enjoyed it immensely.

Sunday the 3rd – VOICES AGAINST CANCER EVENT COMING SOON! – With less than a week for the Voices Against Cancer event in my hometown of Sioux Falls, South Dakota, I got on-line to do some last-minute promotion and write some commercials. I got some information from back home that intimated that I needed to present a promotional message that had a little more clarity and focus. I hope it’s worthwhile, as I’m hoping this is a very successful event! If you’d like to see more about what’s going on, please visit the website voicesagainstcancer.com ! I made a salad and tried to watch the second episode of “The Incredible Hulk” but it was so bad it was almost unwatchable. By the time the Hulk picked up a stuffed dummy of a bear and threw it into the river, I was laughing so hard I was choking on my salad! It’s almost like the producers wanted to make a show like the “Batman” TV series of 1966, but Bill Bixby thought he was doing Shakespeare. I may not continue with this series as I’m not enjoying it very much.

Monday the 4th – SPOOK IS 17 – AND HAPPY BIRTHDAY AMERICA! – I’m living with a couple of teenagers in my house! My cat Spooky turned 17 today, and Roxy just turned 14 a few months ago. My old pal Chris Malmin came over later in the evening and we made some hot dogs and had a nice conversation. We watched the new Nicolas Cage movie “The Unbearable Weight of Massive Talent.” I had been warned by a pal that it was a very weird movie, but I like weird, and Chris and I enjoyed it immensely! It was odd, funny, quirky and enjoyable. I could hear the fireworks going off all over Los Angeles, but unfortunately I couldn’t see any of them. After Chris took off I grabbed a nap, and then got up to do some auditions and work around the house. It was a WONDERFUL weekend! 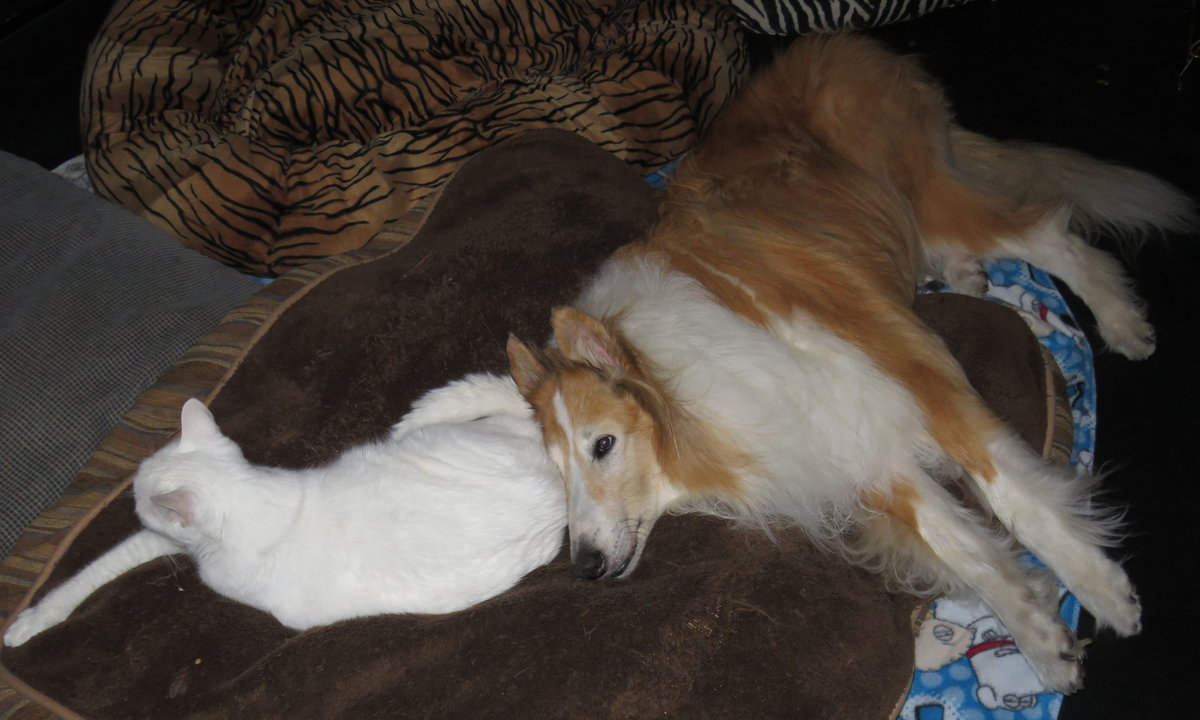 Seeing my dog Roxy using my cat Spook’s butt as a pillow is just about the funniest thing I’ve seen all week! 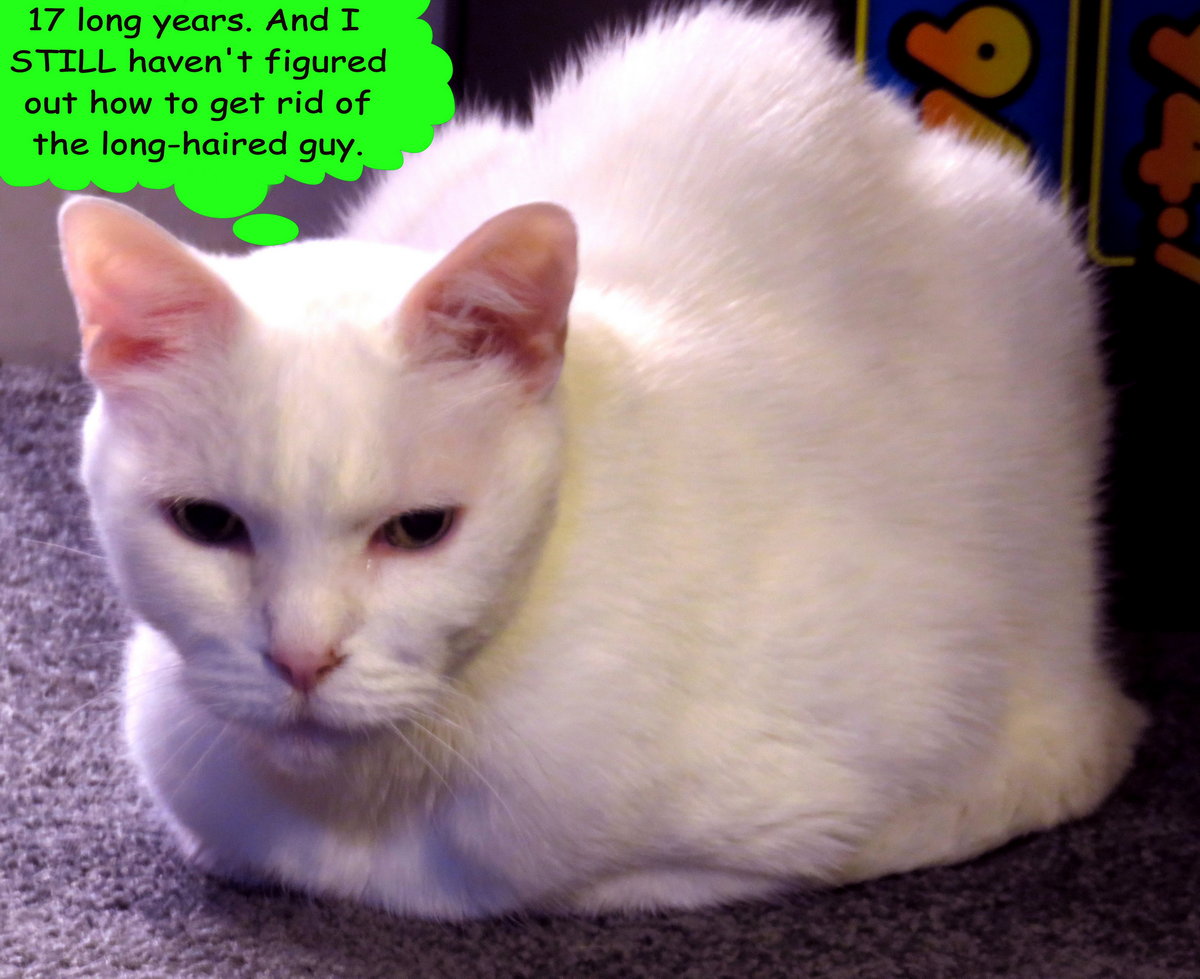 Spook celebrated his 17th birthday on the 4th of July!