During a recent webinar about how many of the Muppets were built, master puppet-builder Caroly Wilcox showed a sketch she created back in the busy days of Muppet-building. It’s hilarious! The ideal Muppeteer has 3 arms (one hand for the mouth, and one hand for each hand) and a head low on the body to watch the monitor more easily! 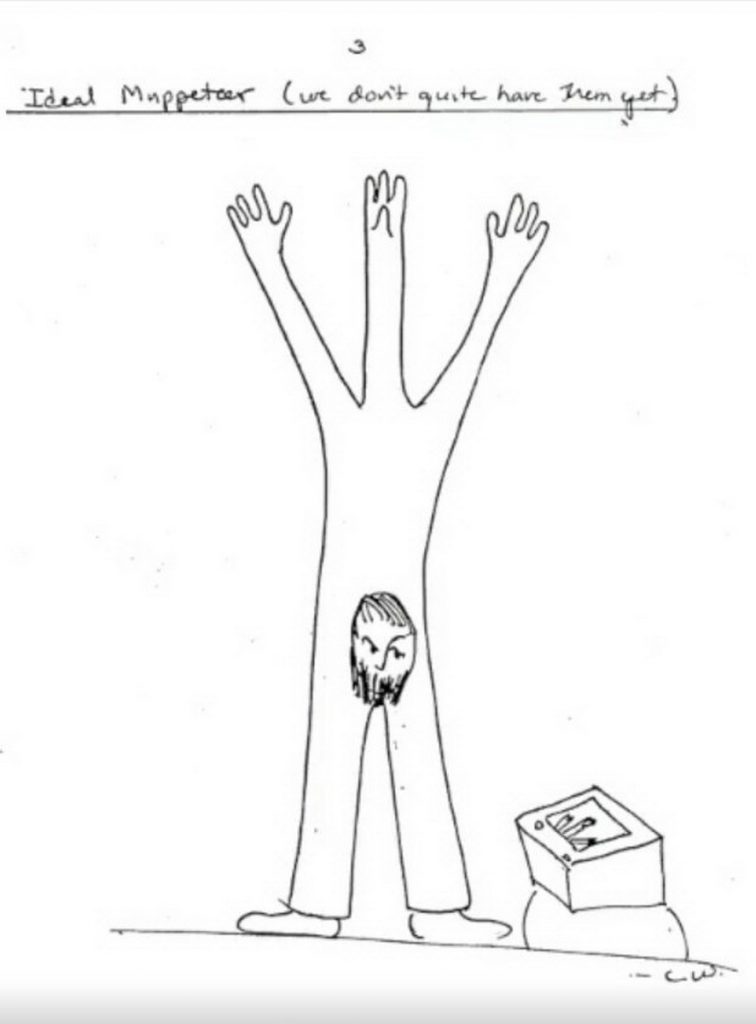 Since it was the third of June, this past week, I’ve had the song “Desiree” by Neil Diamond running through my gray matter. It really IS a very catchy tune! And the lyrics are FANTASTIC!

Monday the 1st – HALF OVER?! – Since it’s now June we’re into the final stretch of the year being half over! Unbelievable! I saw a great meme that said “Uninstall 2020. It has a virus.” I did a little work and then I went to eat at Paty’s to get a salad. Since restaurants are now open and seating people for dine-in I figured I’d go grab one of my favorite salads and eat on the patio. Paty’s was closing early because of the curfew so I just barely got in! I started getting texts that my area was going to be hit by looters and rioters later that night. I immediately became concerned for my church. So I called the security guy and asked what the plan was for protecting the property. Unsatisfied with his answer, I drove over to meet him to discuss it further. After a quick conference I came home to monitor the radio as the sun went down. I told the guard to keep me posted as to the situation, since I could be over there at a moment’s notice. I’m fully prepared for this sort of thing, so if I can be of any use I’d like to help out. There is a liquor store across the street from the church, and my main concern was that if that was looted, some of the overflow may infest the church property as well. I did a few auditions, and then went over to take some supplies to the church security guy before the curfew went into complete effect. Luckily the entire area was quiet, and there was no need for me to leave. Later I fed and walked Roxy, cleaned up my kitchen table (which was full of puppet-making supplies) and did some final work on my “Beautiful Day monster” Muppet replica. I had to trim the eyebrow a bit, so a little additional gluing, and paint areas of the mouth where the weave of the fur fabric was showing. All I need to do is trim the fur on the hands to “blend” the long hair on the hands with the short hair on the fingers. I made some hot dogs on the grill and watched another “Invaders” episode. It was a great episode with the amazing Michael Rennie as a Guest Star!

Tuesday the 2nd – LIGHTS! (WEB)CAMERA…! – Later in the afternoon I did some auditions, and spent a while prepping a script for a session on Wednesday. I’ve found that a little prep for this series of sessions save a lot of pain and aggravation when I get into the studio, so it’s worth it. I worked around the house, and later did some more auditions. I fed and walked Roxy, and spent the evening setting up my new webcam area, hanging lights, and “setting the stage” for a webcam meeting with my attorney and literary agent on Wednesday.

Wednesday the 3rd – IT WAS THE THIRD OF JUNE! – A one-hour webcam meeting turned into an hour and a half! We had a blast! Our literary agent (introduced to me by my attorney) loved my kid’s book project and we had a lot of fun throwing around ideas and concepts. But time was flying by, and I had to get going to my late afternoon session at Voice Trax West. Not only was I running short on time, but it was a hot day out – so I wasn’t able to either walk or bike to the studio. It felt a lot like Palm Springs out! I did have a little time to get some food at Chin Chin before the session, and then we worked from 3 to 6pm. Each time we do one of these sessions, I like to have the studio engineer keep a “song of the day” standing by to break up the flow a little bit. Sometimes these sessions can get a bit “heavy” due to the content, but when the engineer senses we need a small diversion he’ll play a piece of our “song of the day.” Today, it was Neil Diamond’s “Desiree.” Why that particular song? Because the first lyric is “It was the third of June.” Every June 3rd I love to play that song, because when it came out in 1977 I thought it was so cool. It IS a catchy song! After the song I got a few groceries and then headed home. Since all was getting quieter in Los Angeles, our curfew was moved back from 9pm to 10pm. I fed the pets, worked around the house, did some auditions, and later I started trimming the fur on “B.D.’s” fur. But it still wasn’t reading the way I wanted it to, so I think I’m going to cut out new hands and have them replaced and have them re-trimmed the way I want. After I fed Roxy I took her outside for our late-night stroll through the neighborhood. When I walked out the front door, I heard some “scritching” on my patio. Luckily I have a headlamp that I used when I walk Roxy (I call it my “turdfinder”) so I looked over to my patio to see what the noise was about (figuring it was possibly a possum or raccoon) but Roxy would have smelled it and gone nuts. She was barely concerned. Come to find out, a bat had gotten stuck underneath the roof of my patio and couldn’t find his way out. Once I shone the light on him, he flittered about and flew away. “It’s a bat! It’s an omen!” – as the story goes. Perhaps I should rename my patio the BATio! I saw a few drops of wetness on the patio floor, so I’m wondering if he was stressing out and peed. I washed it down immediately with the hose. We had a nice walk, and then I went inside to make some food and watch another episode of “The Invaders.”

Thursday the 4th – SHIRLEY SHUTTLE! – My ‘adopted grandma’ Shirley needed some supplies, and she’s been in lockdown at the senior living center where she resides, so I headed to CVS and the grocery store to pick up a few things. I stopped by her place and dropped off the supplies and some movies for her to watch. I went over to the hardware store and picked up a few extension cords for my webcam set-up, and bought a few new protective masks. Shirley had been wanting one, so I took one back to her. I got home and hooked up a switch and extension cords for my webcam light. Then my pal Sara came over to do some work. Later I did some auditions, made a pizza, and prepped the script for another session on Friday. I fed and walked Roxy and hit the hay.

Friday the 5th – THE BIKE IS BACK! – It was a beautiful day and had cooled off considerably. I biked over to Voice Trax West for my 3 hour session, then biked back home. I did some work when I got home, then my friend Brittney came over and we went to dinner. We had intended to go to Bob’s Big Boy, but we noticed on the way that our favorite Mexican place was now open for dining in! We had some yummy food at Ernie’s Taco House, and then I came back home to do some work around the house. I fed and walked Roxy, drove to Denny’s to get some food to go, and then came home to eat and watch an episode of “The Invaders.” I’m LOVING this show!

Saturday the 6th – HAIR STYLIST AGAIN! – In order to do a quick video shoot in my kitchen for my kid’s book project, I cleaned out the kitchen and removed some hanging animation cels temporarily to make room. Then I walked over to my stylist’s shop to get a cut and color, something I obviously haven’t been able to do for many months! After all the sanitation protocols were handled, she got to work. It was great, but nobody else was in the shop except her. The other stylists didn’t show up. Not good. I got back home and did some more work, reorganized some photo folders in my computer to get rid of all the redundancies, and later I fed and walked Roxy. I set the stage in the kitchen for my video shoot, set up some lighting, and made little hooks out of armature wire to hang my products on the wall for the shoot. I made my traditional Saturday Night Super Salad and watched another episode of (ugh) “Space 1999” from the second season. So far the second season of this show has been really terrible – darn near unwatchable. The problem I had with this one was all the really bad ADR. It was very distracting. I came downstairs and made some DVDS to send to my dad, and then I headed to bed.

Sunday the 7th – SUNDAY SHOOT & SUPPER! – I spent about an hour shooting a piece of video for a demo I’m creating to promote my kids’ book and toy project (my literary agent’s idea), so after I got a piece of video I liked I cleaned up and got ready for dinner with my friends Officer Mark and Miss Connie. We drove over to the Coral Café to eat – I hadn’t been there in about three months and I was really missing the Chicken Cesar Wrap! When we got back to Planet Wallywood, Mark and Connie helped me shoot the segments for the video, and it looked terrific! A bit later I did a bunch of auditions, and then started in on making the rough edit for the final video demo. I don’t have the capability to do a real professional-looking edit, but sending a rough, simplified demo to my editor Scott always gives him a better idea of what I’m looking for. I literally worked on it all night and sent the rough edit and elements over to him, and I headed to bed around 7am Monday morning! 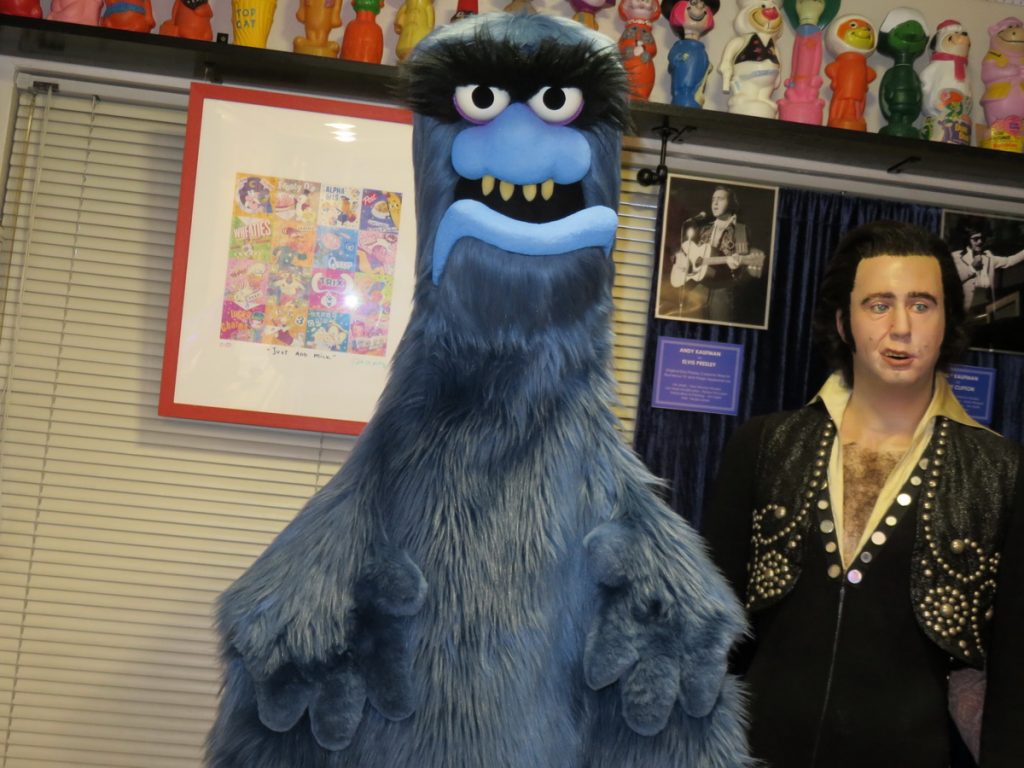 With the eyebrow all trimmed up, “Beautiful Day monster” is looking good! 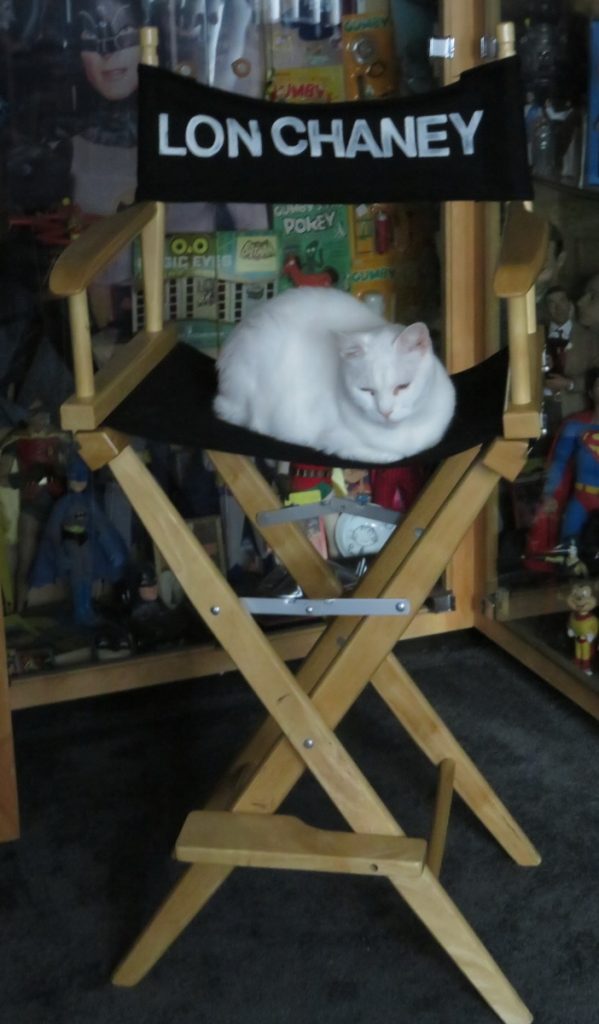 Lon Chaney, the Man of a Thousand Faces, is AMAZING! He can transform into ANYTHING!