When my family would gather for our annual Christmas card photo, I always liked to stage a fun one after we finished with our more studious poses. As I was cataloging photos I ran across one we did during my mom’s birthday weekend at a lake cabin in the year 2000. It made me laugh! 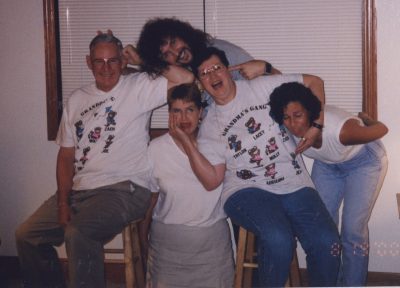 I’ve always liked “Save Tonight” by Eagle Eye Cherry. I’ve been humming it all week.

Monday the 24th – DIRTY DOG DAYS! – Today was the day Roxy’s groomer was supposed to come, but I got a text that the groomer was under the weather, so they would try to reschedule later. Rats. One more day with a dirty dog. I did some work around the house, then drove to my mailbox to pick up my packages. I had a delicious salad and a nice relaxing time on the patio at Paty’s, and then headed home. My pal Jasmine stopped over on her way to pick up a friend at the airport. I sat down at the computer and did some more photo cataloging; listing the contents of about 4,000 scans of my photo album pages into a reference document. I made it past the first 1,000 images! Only about 3,000 more to go! I typed out Wally’s Week, then made some lasagna and watched a few more episodes of “The Lone Ranger” before bed.

Tuesday the 25th – TCB TUESDAY! – It was another perfect “TCB” day (takin’ care of business, as Elvis would say), so I worked around the house all day getting things fixed, tidied, moved, and settled. I recorded a bunch of auditions, and later my pal Emily came over so we could drive to Lancers and get dinner (it was beef barley soup day!). When I got home I recorded some more auditions, and then spent the rest of the evening cataloging photos.

Wednesday the 26th – LIKE BRAND SPANKIN’ NEW! – To kill a few hours before my lunch meeting, I sat down and cataloged some more scans. Then I drove to Paty’s to meet with my pal Tuesday Knight, her mom, her friend Jeff, and my pal Edi. But I couldn’t stay long because Roxy’s groomer called and said they could send out another groomer later that afternoon to make-up for the missed day on Monday. Before I went home I picked up my packages at my mailbox. I got in a pair of vintage Laurel and Hardy figures by Dakin that looked BRAND NEW! These figures were still in their original bags and were flawless! I also stopped for some ice cream at Baskin-Robbins and then headed home to meet the groomer. As always, Roxy turned out BEAUTIFUL! I recorded a bunch of auditions, and later I did more photo cataloging. I had to do some on-line research to study up on a character I performed in a series about 10 years ago. There is a project coming up this week that will revisit that character so I needed to freshen up on the voice and personality. I’ll be doing a four hour session on Thursday which should be fun!

Thursday the 27th – AN OLD FRIEND! – Craving a tuna sub, I walked to Subway to get a sandwich, and then I walked to Roxy’s vet to pick up a prescription for her mobility medication. Then I walked over to the studio to do a four hour session for a new cartoon series. I will tell you ALL about it when I’m able, but for now it has to remain hush-hush until the network releases the information. With all of the craziness over the past two years, I’ve gotten out of the pattern of doing four hour sessions, and they are now quite exhausting! So when I got home I was pretty beat. But the session was very fun, AND funny! I grabbed a short nap, and then did a bunch of auditions. I made a giant salad (which was DELICIOUS!) and watched a few more episodes of “The Lone Ranger.”

Friday the 28th – NEW PUPPET COMIN’! – It’s always a treat to drive into an area where there’s a KFC nearby. On my way to my pal Alex In Wonderland’s studio, I got some food at KFC. I needed Alex to do a little fix on my Robin the Frog puppet, and I also dropped off the components I put together for my new Roosevelt Franklin Muppet replica. I built the head, body, arms, hands, and “skeleton” hand inserts. I need Alex to do all the sewing and hand-stitching on the fabrics. When she’s finished we can put everything together. We’ll stuff the arms, put the “skeleton” pieces into the hands, stuff them, attach them, and then I can trim the area around the mouth that overlaps into the mouth plate. While I was there, I also chatted with her husband Mike about creating the four foot tall Popeye cutout, similar to the one that adorned the wall of the kid’s show I watched as a kid. Mike got the artwork downloaded. He’ll make a vector file of it and give it to a precision cutter to cut it out of a durable piece of wood that is commonly used for projects like this. Then Mike will project the image onto the cutout, and paint in the details. Marvelous! I drove home and fed the pets. Later I met a new friend for dinner at Miceli’s. She loved hearing the servers singing Broadway songs between serving people’s orders. She had never been to a place like this before. I started talking to a table of young adults at the table next to us, and found out that one of the guys played piano. He said he only started playing in early 2020, but he was VERY good. It seemed like he had been playing since he was a kid. He asked if I wanted to sing with him, so after the staff piano player left, he sat down at the piano and started cranking out the tunes. We sang “Piano Man,” “Let It Be” and others. It was great! The kid was REALLY good! It was so much fun to be back at Miceli’s. I had missed it. I got home and did some work around the house for the rest of the night.

Saturday the 29th – IT’S BEEN GREAT FOOD WEEK! – In addition to having not been at Miceli’s in a while, I also haven’t been to the Smokehouse in a while. I was supposed to meet friends for Christmas dinner, but that was the day I got sick and had to cancel. I’ve been craving it for over a month! Today was the day. I met with my pals Edi and Officer Mark about the upcoming 50th anniversary of the #1 hit song “Brandy (You’re a Fine Girl)” (which Edi’s husband wrote and sang). Officer Mark calls it the “Brandyversary! We came up with some really great ideas that Edi is going to run by her husband Elliot Lurie. Though my tummy was full of really great food and I was looking forward to a nap, I needed to trudge over to the grocery store and get some supplies. When I got home I put everything away, fed the pets, and relaxed. An evening full of working around the house culminated in the creation of another legendary Saturday Night Super Saint Salad, and an episode of “The Saint” before bed.

Sunday the 30th – PUPPET ROOM PERK-UPS! – Sunday is my usual “veg out day,” so I normally sleep most of the day. Luckily I happened to get up mid-afternoon and saw a text message from my pharmacy telling me that it was the last day to pick up my prescription before it canceled. Odd. My doctor issued the prescription on the 17th, but it took the pharmacy a week and a half to fill it because they couldn’t get the medication in stock, due to shortages. But my pharmacist (whom I’ve known for years) called a few days ago to let me know she had a smaller quantity of the medicine on hand. It wasn’t the quantity the doctor prescribed, but she offered me the smaller quantity if I wanted it because she knows I need it. I told her I’d take it and thanked her for her kindness. So I drove over to CVS and picked up the prescription with a few other items. I had planned to stop by Taco Bell to get some food, but when I got to my car I flashed on an idea of getting a Domino’s delivered, since it’s been a while. And that’s what I did. I enjoyed it while working on the computer. Later I turned my attentions to one specific display case in the Puppet Room. I needed to affix some specific types of hooks on the glass walls so certain items would display properly. I also noticed that my “Wizard of Oz” clock was very difficult to read. (My Puppet Room features a combo Oz/Muppet design scheme) I opened the clock up to gain access to the actual clock face. I mixed up some light green acrylic paint and painted the hands of the clock so it would read better from a distance. The black hands of the clock were blending into the busy design of the clock face too much. But not anymore! I spent the rest of the night cataloging photos. I got past 1,500 photos, so I’m ALMOST halfway done! 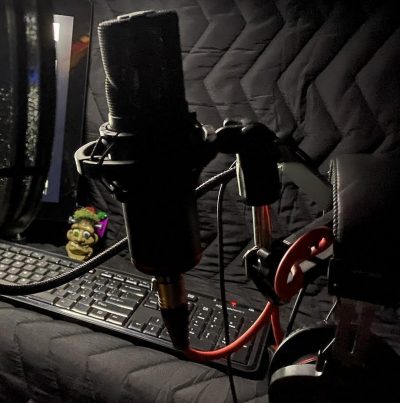 A Christoween fan and Voice Over Artist sent me this photo recently, of his Frankie ornament keeping him company in his studio! 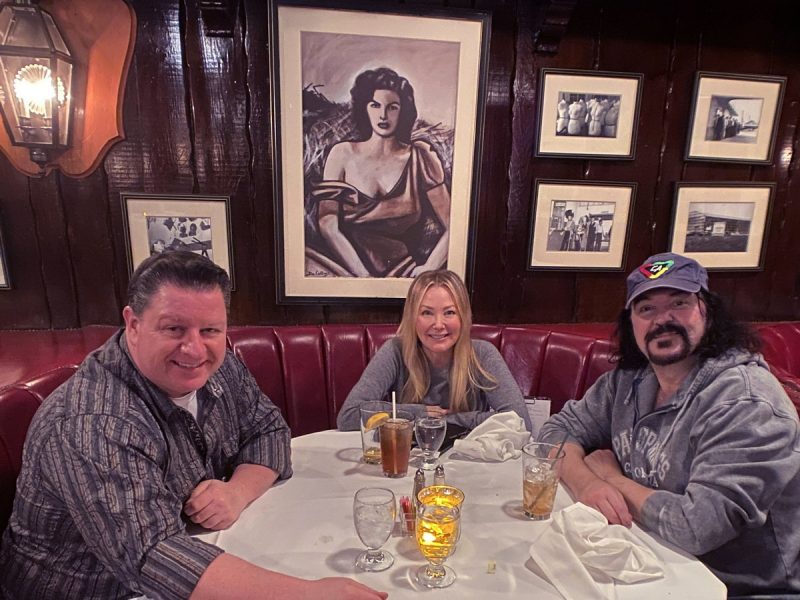 Officer Mark, Edi and I at our “Brandyversary” brainstorming session. 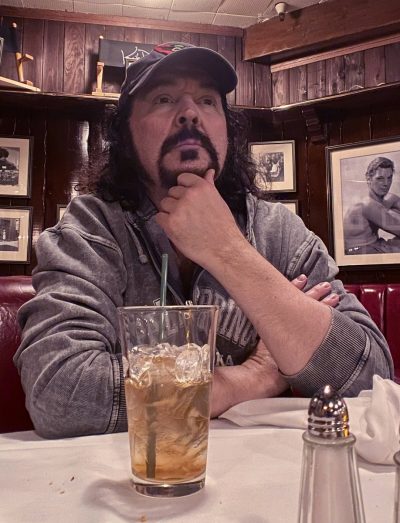 I think I feel an idea hatching!

This display case in the Puppet Room has commanded my full attention this week. I LOVE how this is looking!