My 103 year old WWII vet pal “Bazooka” Joe wasn’t the only one I know who handled bazookas in the military. My dad also worked with them, even though (unlike Joe) my dad was (thankfully!) in the Army in peacetime. 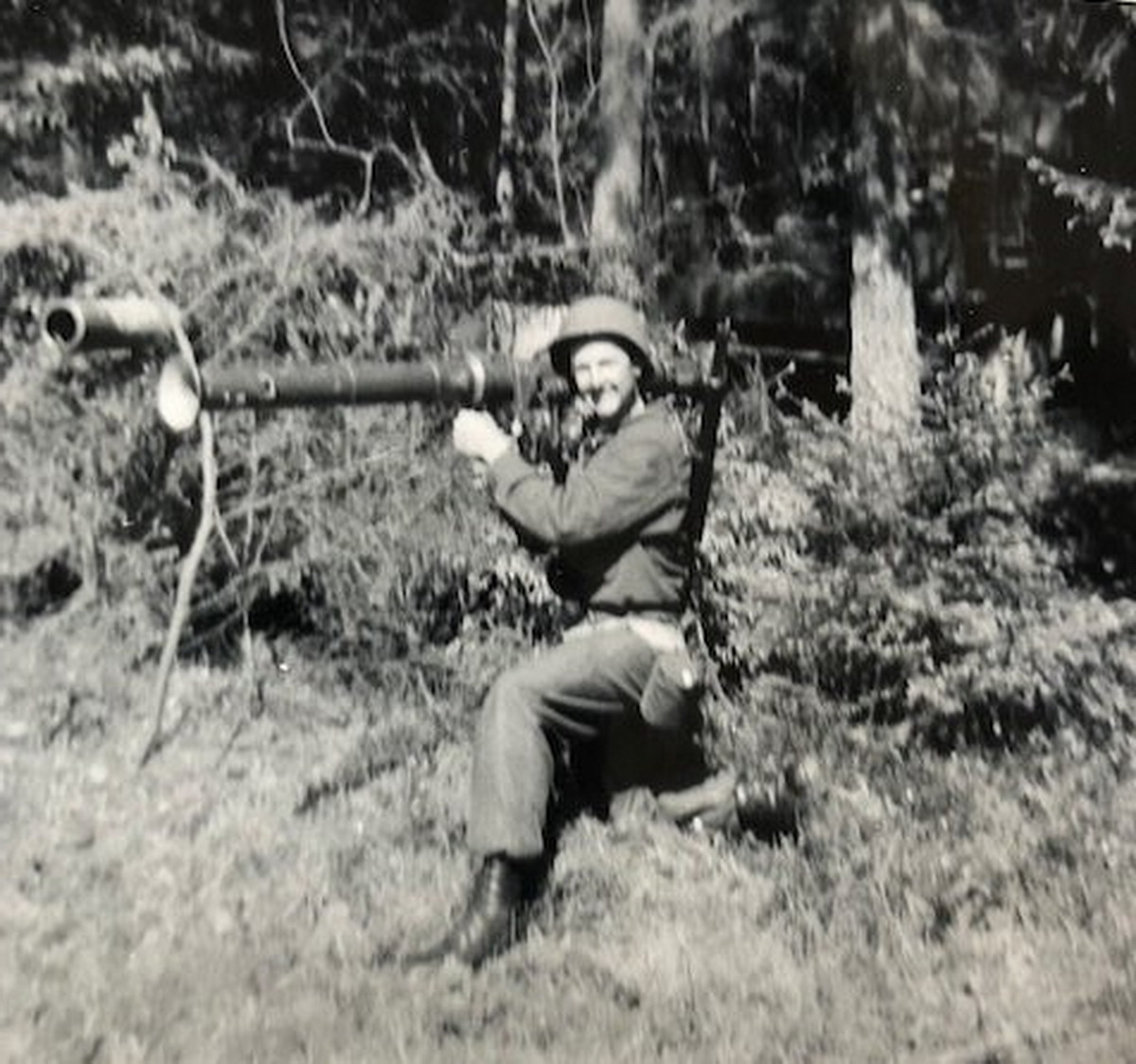 Though we’re not quite into summer yet, it has been a VERY nice spring! And a few of the days have “hinted” at summer. Which makes me think of this song by Weezer called “Feels Like Summer!” I sing this when, well…it feels like summer.

Monday the 11th – TO SING OR NOT TO SING? – Before I sped off to start the day I prepped the house for Roxy’s dog sitter. I typed out a list of care guidelines, and then headed to Foam Mart in Burbank to buy some more L-200; a spongy, rubbery material that you can get in large quantities. I bought a piece that’s 4 feet by 8 feet so I can double her area in the living room. Since she’s no longer able to control her bladder as long as she used to when she was younger, I have a sheet of L-200 on the living room floor to protect the carpet. It’s also nice and soft for her to lie on. But I felt her cordoned off area was a bit cramped, so I wanted to increase it by twice as much. I hit Burger King for lunch at the drive-thru, and headed to Igloo to do a five hour session for the foreign sitcom I’ve been dubbing for the past 5 weeks. I wrap up at the end of the week, and the six week full-time gig will come to an end. Most sessions I’ve done have been four hours, but they need five hours today. Even though it was a long one, it flew by very quickly. It was so much fun crafting jokes and fine-tuning the scenes for the English-speaking audience. We’re at the end of the second-to-last episode, and we only have one more episode to go. We’ll have all of Tuesday, Wednesday, Thursday and Friday to finish that up. And yes, we’ll need all of that time because these episodes are very “dialogue dense.” I stopped at CVS to pick up some supplies, the grocery store to get some food, and then I headed home to feed the kids. I relaxed a bit and then recorded my nightly auditions and wrote Wally’s Week. I also recorded another segment of Wally the Elf for this year’s “Christmas Across the Lands” radio show. I’m so excited to be a part of that program, and hearing myself on last year’s show was a thrill beyond belief, as it’s my favorite Christmas radio show! I made some spaghetti and watched the final episode of the foreign sitcom to prep for the final four days of sessions. There is a lot of singing in this episode, and I’m hoping they keep the music in its original language. But I’m not sure if they’ll have me sing the songs in English or not. I need to be prepared for anything.

Tuesday the 12th – ENGLISH!!! – After grabbing a salad-to-go at Paty’s, I headed over to Igloo to eat my lunch and then do a 4 hour session for the foreign sitcom, which included some pick-ups from the first few episodes. “Pick-ups” are lines that were missed during the first pass, or changed from their original form. While I was doing the pick-ups I got to hear some of the other English Voice Actors in the mix and it was fantastic! Since I was the first actor hired, I was acting against the other actors speaking in a foreign language. But now it’s great to hear me against the other English actors. I got home and Roxy had messed on the padding. So it looks like I’m going to have to take her out every 4 hours religiously. Poor ol’ gal can’t hold it like she used to. I’m going to need to hire a dog walker every time I have to leave the house for longer than that. Very sad. But what was even sadder, was when she got up her back legs must’ve been a little asleep, and she was “knuckling.” Knuckling is when they can’t feel that their feet are on the floor, and instead walk on their knuckles. I helped her work it out, but it brought back horrible memories of when Sassie had her neurological myelopathy, and knuckled on a regular basis. I had to put corrective booties on her back feet to keep them level so she could walk on them. I got some rest, and then I recorded an important animation audition.

Wednesday the 13th – IN FLUX! – To begin the day, I got a text from my agent letting me know that my 2pm call time for the foreign dubbing job had been moved back to 3pm, so I had a little more time to get ready for the gig. I did some work and then headed to Chick-Fil-A to get some lunch. But when I arrived at Igloo at 3, I got another text letting me know that the call time had been moved to 3:30, but I was already there. Apparently some technical issues at the previous session necessitated my session to move back a bit. But since I was already at the studio, they ended up taking me in around 3:15. So I ended up working 2 hours and 45 minutes. On the way home I stopped at the post office and mailed off some autographed items, and picked up some packages at my box. It included a new curved monitor for my computer. I had seen the curved monitors at Igloo and loved them, so since my computer guy is coming by next week to shore up my system, I figured I’d get one to integrate into my personal system. He’ll be adding a back-up system and a new keyboard to the system, in addition to doing a routine clean-out. I got home and was all ready to relax, when I realized with horror that I had a dinner meeting in 20 minutes!! I zoomed back out the door and headed to the Smoke House to meet with my buddy Troy, who writes for the “Ellen” show! We had a great dinner and chatted for hours. With my tummy full of yummy food, I headed back home to nap in the Puppet Room to the sounds of a croaking frog outside my house. VERY relaxing! Later I recorded a ton of auditions, made some lasagna and watched a few more episodes of “The Lone Ranger.”

Thursday the 14th – ALMOST WRAPPED! – The thought of a few chili cheese dogs from Weinerschnitzel was very appealing, so I grabbed a few on my way into Igloo studios. I got to see my buddy Dan Roebuck, who was also at Igloo recording on the same foreign sitcom, but in another studio. I recorded for 4 hours and headed home. Hard to believe that the six week gig wraps up in one day! It flew by! I got home and fed the kids and ordered up a Domino’s pizza. I did a little work in the garage to find some items I needed, recorded my nightly auditions, and rested up. Later I finished up a few personal projects and prepped for the final day dubbing on the foreign sitcom.

Saturday the 16th – BUSY, BUSY, BUSY! – There’s a long list of things I need to get done now that I have free time again. I got up early afternoon to wait for the maids to arrive to clean Planet Wallywood. Until then I did some work around the house. After they finished up I walked over to the hardware store to get some plastic cord holders, and a metal swivel ball for my shower head. But all they had were…you guessed it…chrome plated plastic. So buying that really wouldn’t have been much of an advantage, considering the reason I was needing a swivel ball for my shower head is that the other one broke. It would probably be the same thing with this one too. Oddly enough, as I was leaving, a guy came in and asked the clerk if they had a connection for a shower head mount. I pulled the broken one out of my pocket and said, “Like this?” He said it was that exactly. He said his swivel ball had snapped too. Good grief. Where is the quality!? I walked over to Roxy’s vet to pick up some meds, and then headed home. My friends Emily and Sabrina came by so we could go to dinner. I couldn’t wait to wrap my tongue around a few slices of pizza at Little Toni’s, but when we got there they said there was a 40 minute wait. But there were plenty of tables open. I suspect they simply didn’t have the server staff available. So we went across the street to get burgers at a place called The Habit. Since Emily is a trained massage therapist, I treated Sabrina to her first-ever professional massage. She loved it as much as I thought she would. I’m trying to teach her how to relax, meditate, think positive, and not stress so much. But being a young person, that can be difficult sometimes. I grabbed a short nap late in the evening, and I got up to work all night on organizing my cables, and completely reorganize my shipping supply cabinet and drawer. The drawer was so full I couldn’t even open it! I separated all of the envelopes, mailers, cardboard, plastic, etc. into different areas. It all fits now! Heck, I even organized my stamps into different denominations! It all needed to be organized very badly! But close to the dawn of Easter morning I had quite a bad headache. Then I realized it was most likely due to the fact that I hadn’t eaten anything in about 12 hours! So I got ready for bed, made my traditional Saturday Night Super Saint Salad and watched an episode of “The Saint” before turning in.

Sunday the 17th – HOPPY EASTER! – Normally Sunday is my “comatose” day, but it was especially needed after having just completed a 6 week run on the foreign sitcom. I managed to get up later in the evening to meet my pal Sara for dinner at Little Toni’s (yup, I was still craving that pizza!) and while I was there I ran into my old Voice Acting pal Audrey Wasilewski! I hadn’t seen her in well over two years and it was great catching up! I got home and did a little work, rested some more, and later I worked on Wally’s Week. I ate my leftover Little Toni’s pizza and watched the pilot episode of a 70’s show called “Ghost Story” on Blu Ray! I loved 70’s shows like this! Lots of great guest stars, and terrific writing! 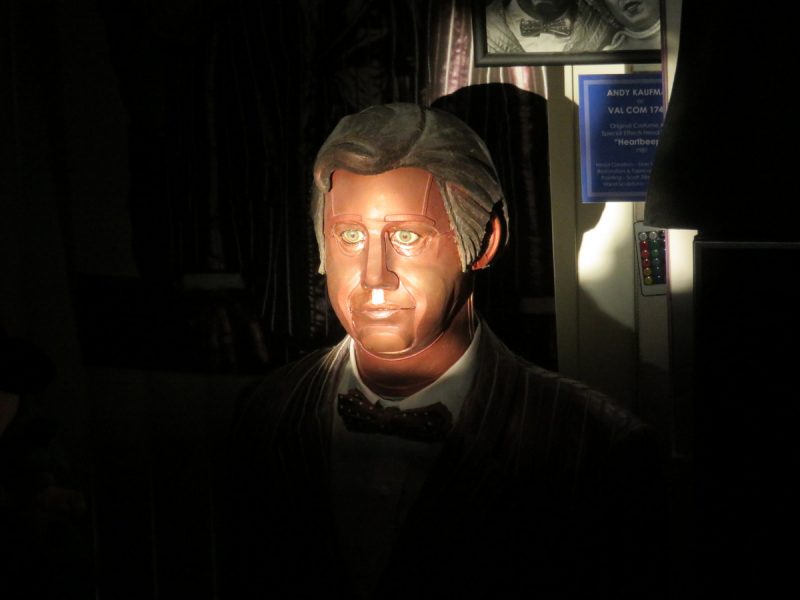 When I returned home this week the sun was setting in the west, and shining through my kitchen window down into my living room. It focused a beam directly on the face of my Andy Kaufman “Heartbeeps” mannequin and it looked quite eerie in an otherwise dark room! 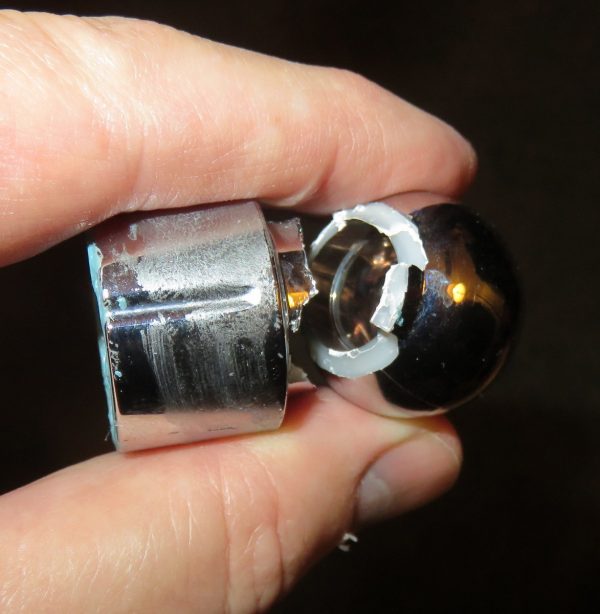 Here are the nudity-free shots of the broken piece on my new shower head. It didn’t even last me a month! CHEAP! 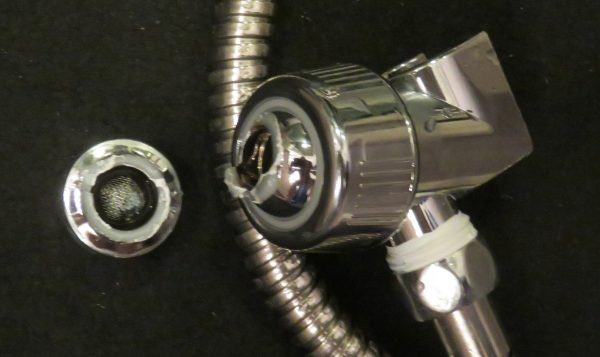 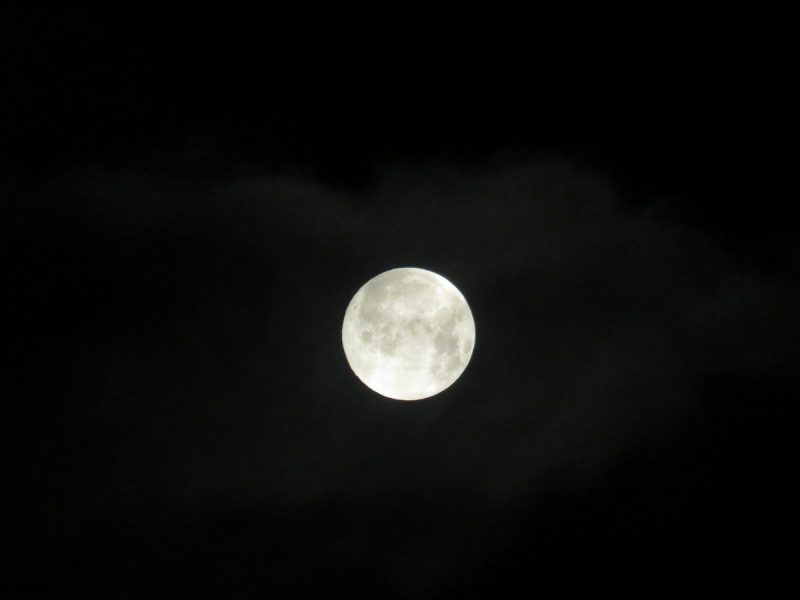 These are some shots I took of the Good Friday/Passover/Easter full moon this past weekend. It was GORGEOUS!! 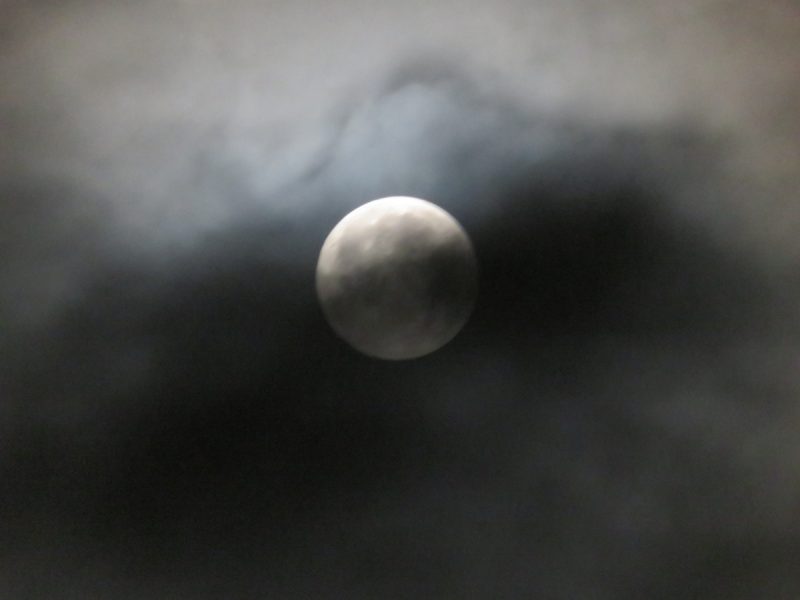 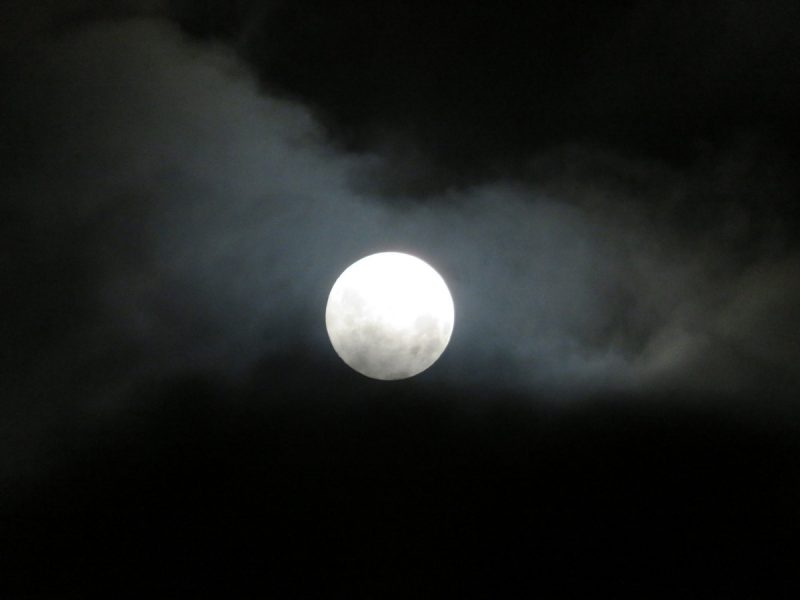 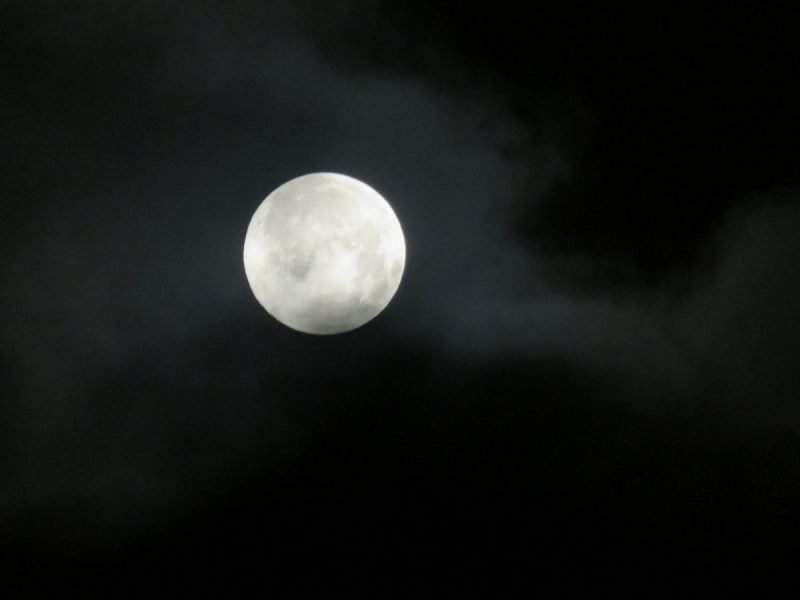 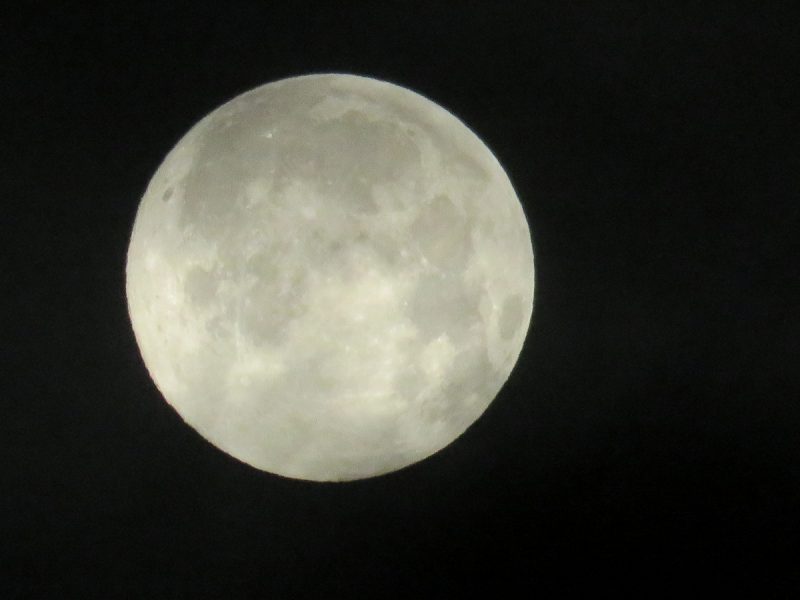 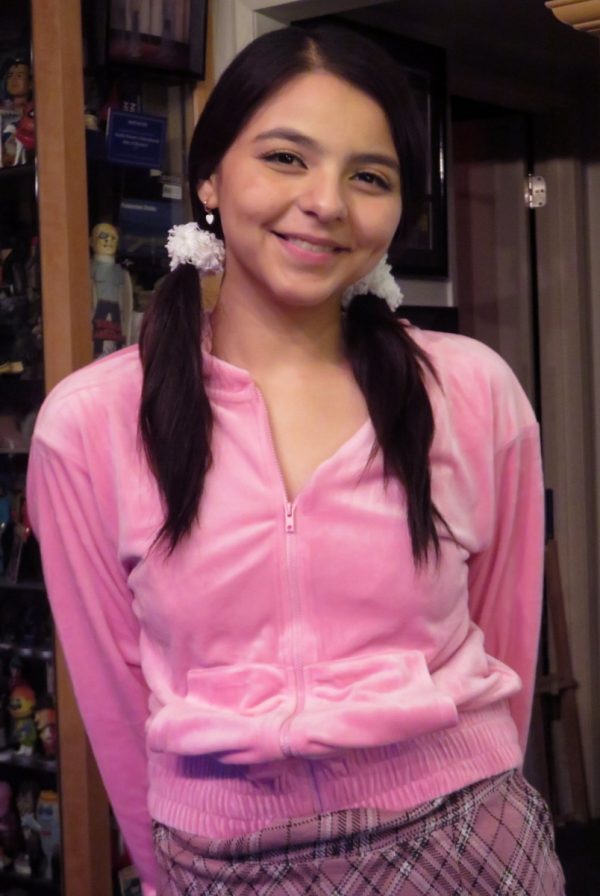 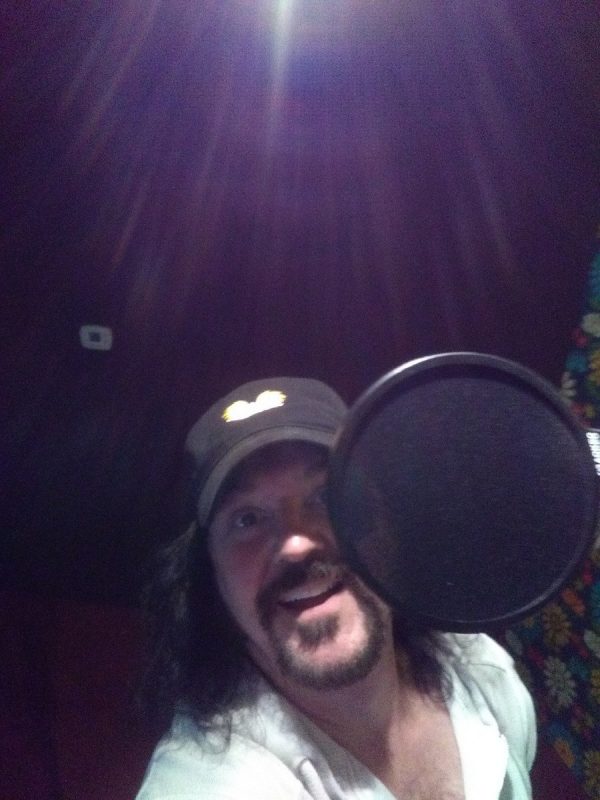 It’s a wrap on the 6 week dubbing job on the foreign sitcom! Details soon! 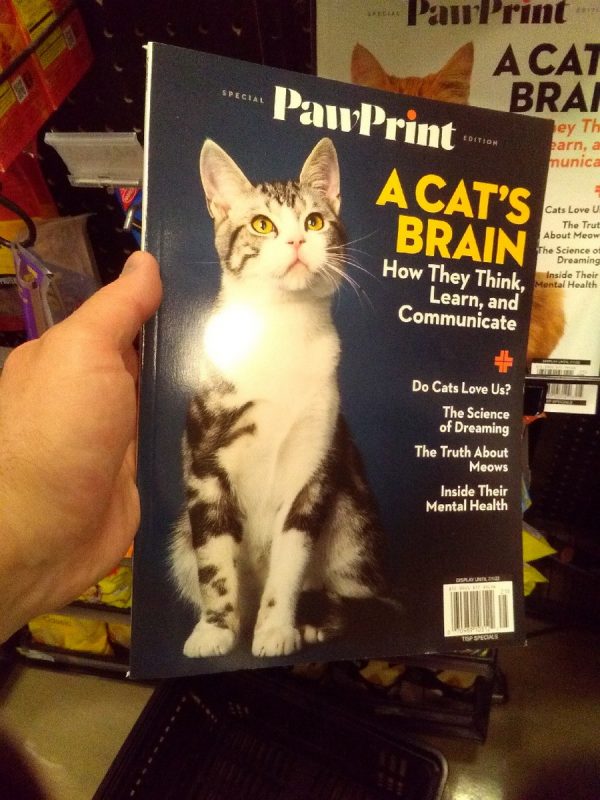 Standing in line at the grocery store I saw this magazine about a cat’s brain. I laughed at the thought that the publishers of this magazine would have the audacity to think they could completely encapsulate a cat’s brain in one tiny little magazine. It would take volumes and volumes of “War and Peace” sized tomes!

This never gets old!