From more “funner” days back a few years ago. It was the red carpet event at the Hollywood Museum’s Batman ’66 exhibit. Batusi, anyone? (Thanks Buddy & Puff!) 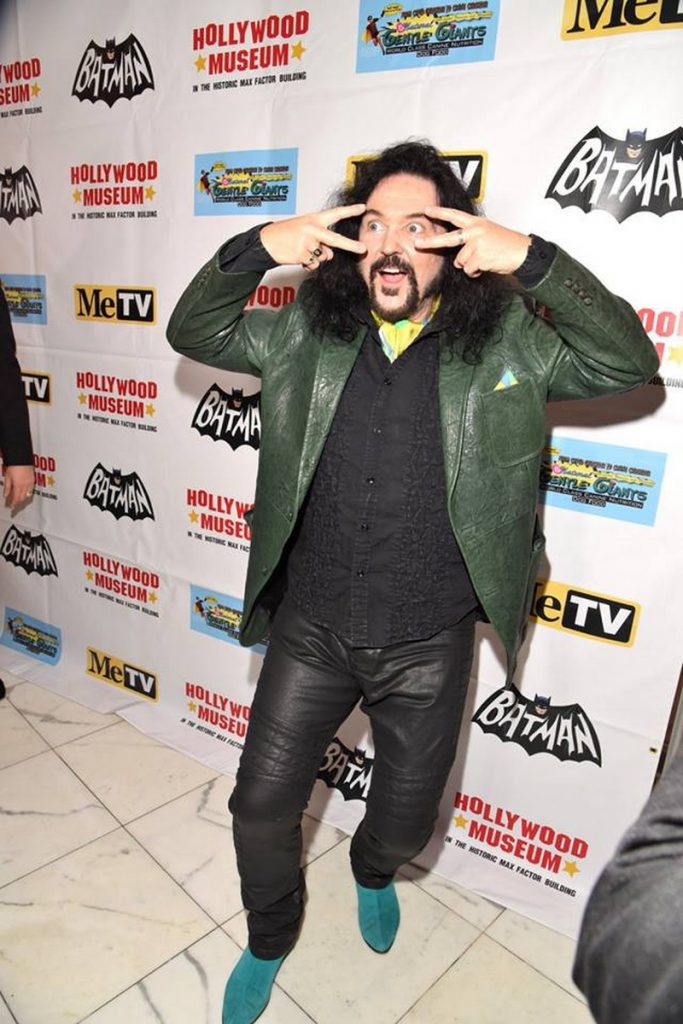 Apparently, Eric Carmen’s “All By Myself” is quickly becoming this nation’s anthem during lockdown.

Monday the 23rd – LOCKDOWN LANGUISH! – This lockdown is messing with my sleep. I didn’t get up until 6pm! I fed the pets, did a little work, and then napped some more! I got up later to do Wally’s Week and pay some bills. Tuesday’s going to be very busy, so I turned in early to prep for the day.

Tuesday the 24th – ESSENTIAL ERRANDS! – The first errand of the day was to get the mail at my mailbox. Obviously I hadn’t been there in a while so there was a lot to pick up. I dropped off a box of fur to my seamstress Shelley so she could get started on the body for my Oscar the Grouch replica Muppet. The head is almost completed and will be done by the time she has completed the body. At that time I’ll take it over to her so she can combine the two together. I drove home and picked up Roxy to take her to the vet. She’s been on the amazing medication Carprofen, which completely stopped all of the age-related tremors in her back right leg. She can stand up for long periods of time now with no shaking at all. It’s utterly amazing. But extended use of this medication can cause liver issues in dogs (especially older ones) so her levels need to be monitored every so often. The new protocol is to park your car in the vet’s parking lot, and a masked and gloved attendant would come pick up the pet and take it inside while we wait in our cars. I also wanted the doctor to look at an inflamed “mole” on Roxy’s left shoulder which looks like it had been opened up while she was scratching. After the attendant took her in I drove over to the local pet supply place and picked up some much-needed supplements for her which I had been running low on. Then I drove to the neighborhood pot store to pick up some more CBD oil for her. The doctor called me to say that the sore on her left shoulder was an inflamed hair follicle, which had opened up. I was to put Neosporin on it every 12 hours and it would be fine. She also said they had taken her blood sample and I could come get her. They would call me the next day to let me know the results. I took Roxy home and started working on Oscar’s unibrow a bit matting it and compressing it. It won’t be trimmed until my hair guy Sergio Lopez can come over after the lockdown. At that time he’ll trim the fur on the face, mouth, and the eyebrow. I don’t trust myself to do any of that on my own. I took a shower and grabbed a nap. I got up later to do work, some auditions, and I hit Denny’s to get some food to go. Since all in-house dining has been suspended at restaurants it was looking pretty desolate and sad. I’m just glad they’re still doing take-out orders! I would be LOST without my Denny’s! I came home and got ready for bed and watched another episode of “Bronk” while eating my Denny’s.

Wednesday the 25th – FURBENDER! – Once again I took the liberty of sleeping very late. I got up to do a little work, and then slept again. Nothing else is going on, so I might as well use the lockdown to catch up on sleep. Sleep is the best thing for stress reduction and immune system-boosting anyway. When I got up later I started doing some “furbending” on Oscar. In the areas where you can see the edge weave of the fur fabric, I put a thin line of Barge glue along that edge. When it got tacky enough, I would take a toothpick and “bend” the fur on to the glue in order to hide the edge of the fabric’s weave. It’s something I learned to do when I was making puppets as a kid back in the 80’s. I made a sloppy joe and reheated a few Denny’s mozzarella sticks. YUM!

Thursday the 26th – GORGEOUS AND GALLOPING! – The weather was simply magnificent, so it was the perfect opportunity to get some fresh air and go for a walk. I had errands to do anyway and I didn’t want to drive. I walked over to CVS to pick up a few items, and then over to the grocery store. I was surprised to see the shelves fairly well stocked! Looks like the mania is over for now. But there still weren’t any paper products. On the way home I walked by the vet’s office to pick up Roxy’s meds. The Dr. said one of her liver levels was reduced (good news) but one level had increased (not good news). But we’re going to keep an eye on her and she’ll have to have another blood test in 3 months. I really don’t want to take her off Carprofen because it’s done wonders in improving her quality of life. I got back home and dropped off the groceries, then drove over to Little Toni’s to get a pizza to go. The thing I miss most about this lockdown is eating out. I loved eating out with friends, but at least I can still get the food I love, even though I don’t get the dine-in experience. I came home and ate, did some auditions, and made some plastic “eye caps” for Oscar. I needed to do some painting and gluing around his eyeballs, and in order to protect the eyeball pieces from damage from spilled glue or paint I made these little “contact lens-type” covers. I secured them into place with painter’s tape and did the necessary painting and gluing. I took a nap, and then got up to feed the kids. I had a ton of auditions to do. Then I walked Roxy for our late-night stroll around the neighborhood. It’s still VERY cold out, even though it’s technically spring. Before bed I put the finishing touches on Oscar, so he’s essentially as done as he can be at this point. After his body gets attached he needs his hair trimmed, and then I can put on the pupils and attach the foam tongue in his mouth. Then he’ll be finished!

Friday the 27th – NEXT! – Mid-afternoon I got up and reheated some Little Toni’s pizza. I started working on my next puppet project; Kermit’s little nephew Robin. I started sketching out a rough pattern for his body. I did some auditions, and then napped in the evening. I got up later to work around the house a little, and cut some paper pupils for Oscar. I wanted to start looking at size and placement for when I do the real pupils later. The pupils will eventually be cut out of velvet, but the paper pupils looked pretty good. I got the placement I liked and wrote down the spacing measurements so I don’t forget when the time comes to put the real ones in. I made some spaghetti and watched another episode of “Bronk.” I loved this show as a kid and even wrote Jack Palance a fan letter. I didn’t get an autograph back, but they did send me a 4” X 5” black and white photo of him. Now that I’m a few episodes in I’m starting to see why I liked this show as a kid. Jack Palance was pretty cool.

Saturday the 28th – MORE LOCKDOWN LIFE! – Once again I rose in the mid-afternoon and checked some texts and e-mails. Since I’ve suspended my regular Saturday night movie nights for the nonce there’s not much else to do. I did some more work on the Robin the Frog body, and then I cut the mouth plate out of thin, flexible plastic. I decided to treat myself, so I ordered Chinese food from Chin Chin and had my friend Sara come over to join me. We watched “Rambo: Last Blood” – a movie that wasn’t appropriate for a regular movie night with the group. It’s pretty good, but pretty gory. I grabbed a nap and got up later to feed the pets. I laid back down on the couch for a bit, and then got up to start watching videos of Robin the Frog on the internet and grabbing some images for my research. Then I hit the hay.

Sunday the 29th – FLUSHING FAUX PAS! – Normally on a Sunday I get up around 4:30, which I did. But instead of hurriedly feeding the kids and getting ready for church, I just worked around the house a bit. There’s no church, and no restaurants. So my usual routine of evening church and dinner with my ‘adopted grandma’ Shirley has been put on hold. I decided that I didn’t really like the foam body I had constructed for my Robin the Frog Muppet replica, so I set about making a new one and starting from scratch. This one turned out MUCH better and had a more accurate shape. I also started working on designing his legs, arms and flippers. The hand design will come later. I napped on the couch for a bit, got up to feed the kids around 3am, then walked Roxy. I decided to dump Spook’s litter box, but as I was flushing the litter I realized that something was wrong. The usual brand of litter (which is flushable) wasn’t available when I was shopping. Even though this brand said it was flushable, it clearly wasn’t. Once it hits water it turns to a mushy, clay-like substance! It was clogging the toilet, which caused an overflow on to the floor of my bathroom! JUUUUST GREAT! I got everything cleaned up and vowed to never buy that brand again. I went back on the couch and slept until 9am. When I woke up I made an awful discovery. But more on that next week!

And how was YOUR week in lockdown??!! 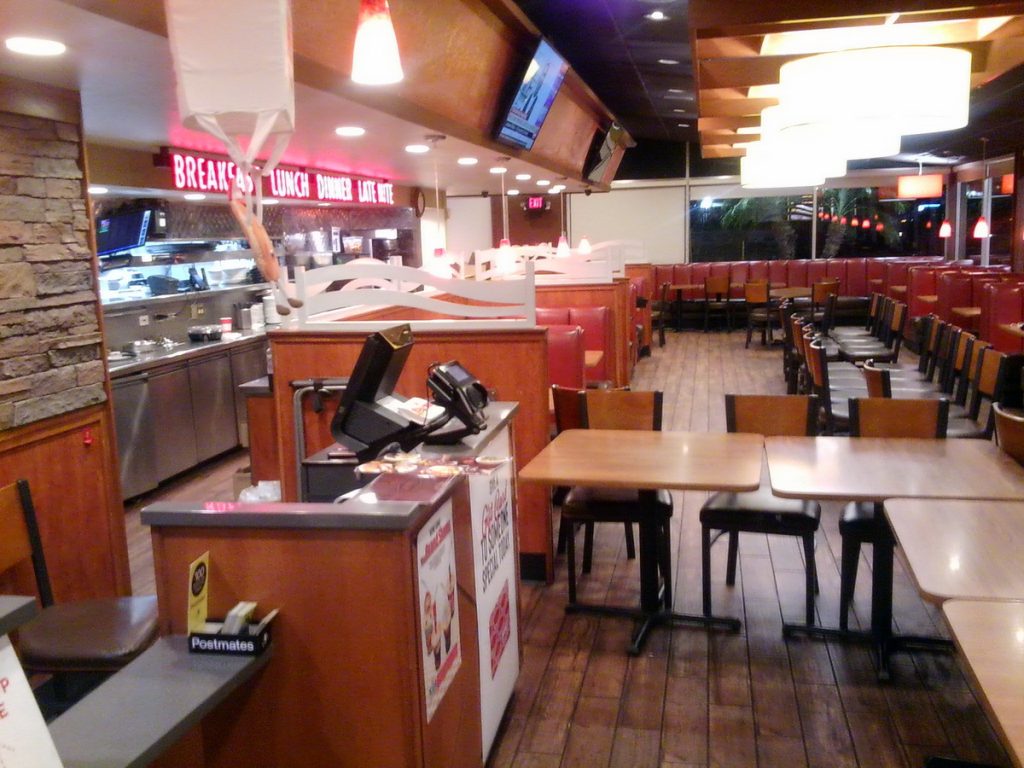 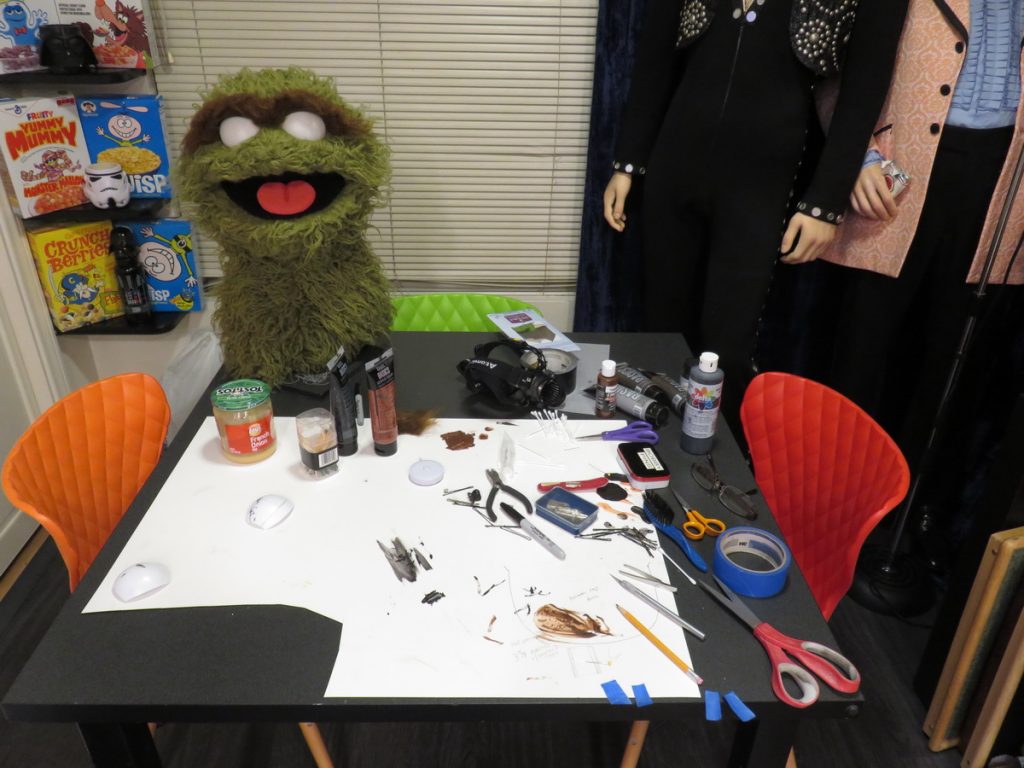 My Oscar workstation winding down 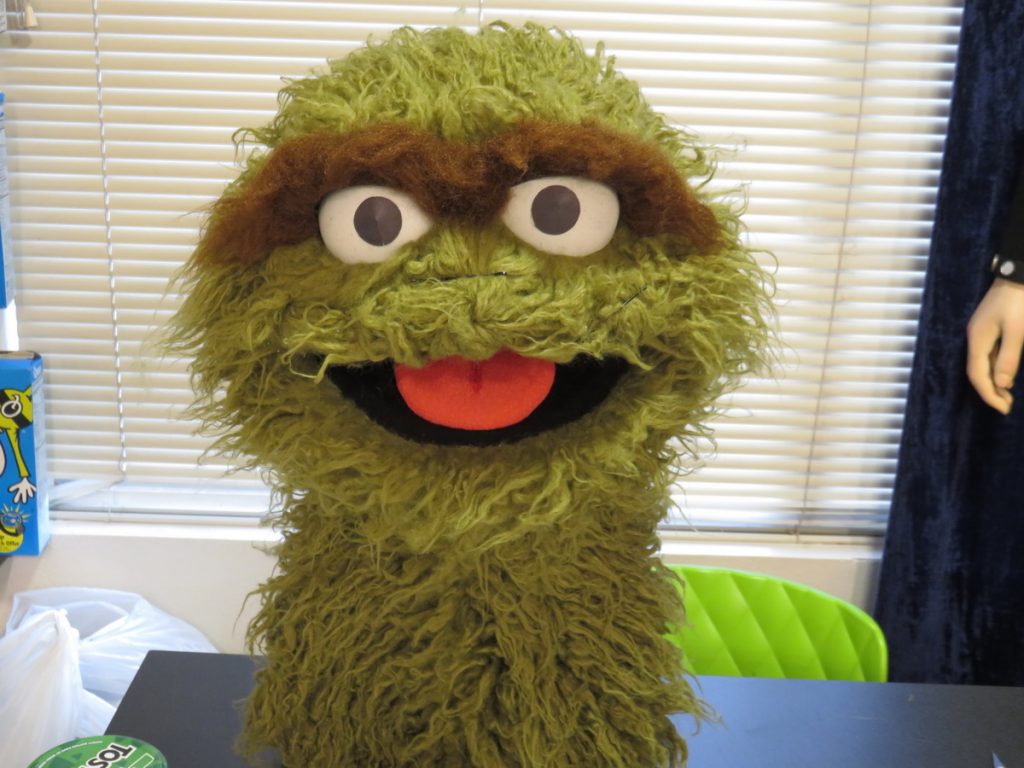 The paper pupils I added to ascertain the spatial issues. 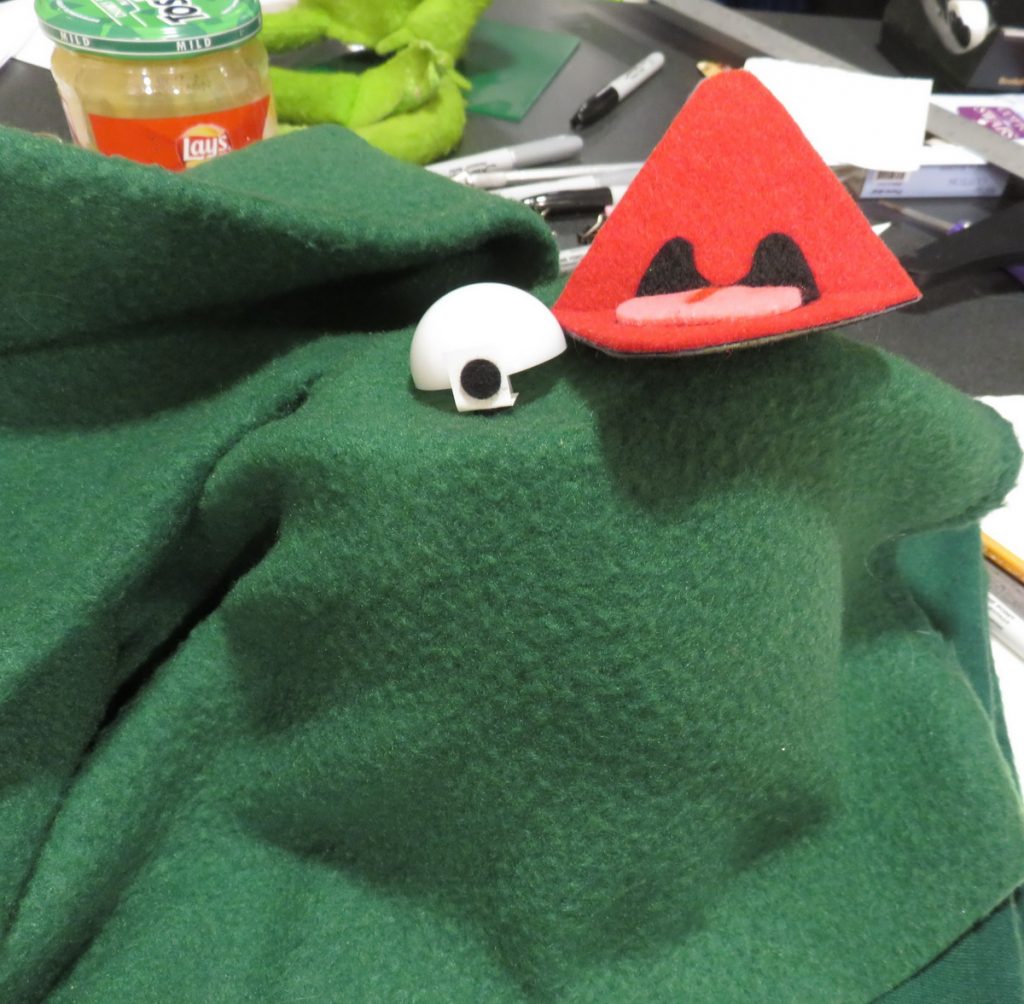 I’ve got the materials, now I just need to “free the frog” within!

Until the lockdown is over and I can get Oscar trimmed up, he’s about as done as he ‘s going to be for now.

I missed dining out so much, I set up a table in the Chaney Room to dine amongst some friends!

Spook’s taken to jumping up on my lap for a massage when I’m in the middle of something. He’s never done this before. Lockdown lunacy?