I met this gentleman a few weeks ago at Lancers in Burbank. My dad was also in the Fifth Infantry Division when he was in the Army in the 50s. So the red diamond is a patch my dad wore when he was in the service. My dad went into the Army and then went to college on the G.I. Bill, but this gentleman did the exact opposite. He went to college, got involved in the ROTC, and then went into the Army after that. THANK YOU! 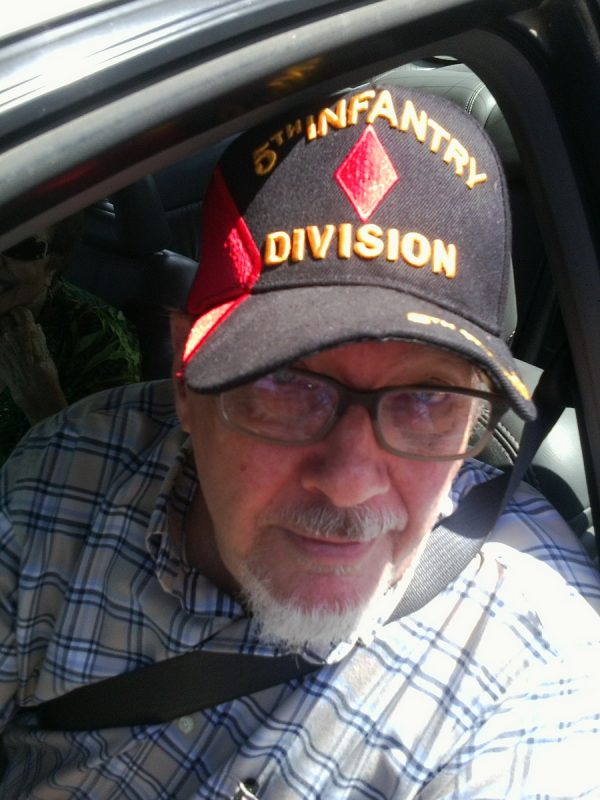 “I Am Waiting” by Yes came up on my iPad the other night in the Tranquility Zone and I’ve been humming it ever since. Really nice song!

Monday the 7th – SNAKED UP MY DRAIN! – Because the shower handle in my Puppet Room shower had been leaking for several days, and my contractor Handy Don was out of town, I called a local plumber named Mike Diamond. Even though they’re a big plumber in L.A. they have really horrible reviews…mostly about trying to rip people off and doing shoddy work. I initially called a plumbing company called George Brazil, because I had a coupon good toward $15 off the work, but when I called the office the receptionist answered, “Mike Diamond.” I should have hung up. Apparently both companies are owned by the same entity. But I scheduled an appointment anyway. The plumbers show up and they’re being very friendly, conversational, talking me up, commenting on what a nice complex it was, etc. They looked at the problem and quoted me a price of $500. $500!!!??? They said they didn’t have the parts with them and would have to go pick them up and it was extra time. I called Handy Don and the plumbers could hear him screaming through the phone. He told me to get rid of them at once, that he’d be in town soon and could fix it. As soon as I turned them loose, the plumbers became instantly unfriendly. I thanked them for coming anyway and all they said was, “Yeah. Yeah. Yeah.” That gave me a super creepy feeling and I’m never EVER calling any company that has anything to do with Mike Diamond ever again. I should have known better considering how badly they screwed up my water heater installation several years ago. Handy Don said he’d come over this weekend to fix it up. And for a lot less than $500! My garage door guy Terry was finishing up my garage door installation, and when he finished I walked to the hardware store to get a cap for my shower leak. Handy Don told me how to shut the water off, then undo the shower head from the fixture, and cap it off. That should prevent it from leaking any further until he can get there. I fixed it right up and grabbed a nap. I got up for my auditions and to type out Wally’s Week. I took Roxy on our late-night stroll through the complex, made some food and watched another “Police Woman” episode.

Tuesday the 8th – MANAGING A MANAGER! – The day started with an hour-long phone call with someone whom I was considering signing with for management. It was a very enlightening call, but since she only handled management for Voice Over, it would most likely conflict with any manager that I would retain who would cover me across the board for all entertainment things…on-camera as well as Voice Over. But I’m going to give it some more thought. The time has definitely come to start looking for some sort of management, I believe. I drove over to Panera to have lunch with my friend Edi, got some supplies at the CVS, got some groceries, and then went home to do some work. It was another hot day in L.A., but this will probably be the last of it for a while. Fall is definitely here! I did some auditions, grabbed a short nap, and then got up later to do more auditions. I did some writing, and walked Roxy through the complex while I enjoyed a terrific cigar and looked at a gorgeous moon. I’m starting to jones for another Palm Springs trip! I came inside and made a Tombstone pizza and watched another “Police Woman.”

Wednesday the 9th – THE CAPTAIN’S NEW CLOTHES! – When I got up mid-afternoon I did a few auditions, worked around the house, and then headed over to my seamstress’ house to pick up the newly tailored Captain Kirk tunic for my lifesize Kirk figure. I had this tunic made for me over a decade ago, and since I didn’t figure I’d ever wear it again, I had Shelley tailor it to fit the mannequin. It wasn’t an easy job, but finding that material is nearly impossible. So making a new one specifically for the mannequin wasn’t possible. I got home and started dressing the Captain. It fit perfectly! Nice and tight just like the originals fit on William Shatner! When the garage guy came over to fortify my new garage door system, he had to displace several of the storage boxes I have on shelves in my garage. So I spent several hours moving stuff around, throwing stuff out I no longer needed, consolidating stuff into fewer boxes, and reorganizing. It was a very satisfying evening. Between now and the first of the year, I’m going to try to get out into my garage and reconfigure all of the things I have in my storage boxes. I’m also going to go through each box and catalog the items for future reference. Then I’ll number them and keep the info in my computer. It’ll be a huge job, but the time has come! When I finished up I fed the pets, did a little more work inside, started writing a 10 minute comedy act for a future appearance at a comedy club, then made some spaghetti and watched “Police Woman.” The episode I watched featured a guest appearance from my old pal Chuck McCann. BOY was he a great actor!

Thursday the 10th – RHYTHM AND BOOS! – All day long I worked around the house, and early evening I did a phone interview with a few guys who are doing a documentary about a CD that came out on Frankenberry, Count Chocula and Boo Berry cereal boxes back in the late 90s called “Rhythm and Boos.” I sang one of the songs on the CD so they wanted to interview me about it. Then I met my friend Tiffany for dinner at Chin Chin, and then came home to grab a short nap. I got up and did some auditions, worked some more around the house all night, then made some hot dogs on the grill and watched another episode of “Police Woman.”

Friday the 11th – V.A.C.! – Jerry’s Famous Deli was my first stop of the day to meet with my friends Nery and Chris. They handle celebrities for autograph appearances, and they’ll be helping us out with a huge children’s cancer charity event next June called Voices Against Cancer! It’s our hope to get 8 top Voice Actors to appear in Sioux Falls, South Dakota for a one-day benefit! I’m working on it with my pal Dr. Lou George, a Sioux Falls Oral Surgeon, and a few guys from the St. Baldrick’s Foundation. It’ll be huge! We just secured our first HUGE legendary Voice Actor, and once the contract is signed I’ll be promoting it here! Chris and Nery agreed to help out and be the event’s official Celebrity Liaisons! I headed over to Staples after lunch to pick up some colored stickers for my labeling system in the garage. Then I went over to JoAnn’s fabrics to pick up some new fabrics for some projects I’m working on. I went home to do some work, grabbed a short nap, and got up later to do some work on my computer; writing for the V.A.C. project, as well as a few other things. I made some soup and a sandwich, since the night time weather had turned decidedly colder, and watched “Police Woman.”

Saturday the 12th – SUPER SHOWER! – Handy Don made it over to fix my Puppet Room shower and all was well. He also worked on cleaning out a drain in my bedroom that was draining slowly. When I left I worked around the house prepping for movie night, grabbed a short nap, and then got up to start the evening’s festivities. We watched “Yesterday” and it was pretty darn good. Even though the casting choices for some of the actors were odd… the script was great! After everyone left I took a quick nap, then spent all night working around the house. I made my traditional Saturday Night Super Salad and watched another episode of “Space 1999.” I can’t decide if this show is campy, or just bad. I’m really trying to like it, but so far the show is pretty much a misfire. And I’m not really sure why. The acting is good, but the scripts are off a bit. But that notwithstanding, the episodes seem very slow to me.

Sunday the 13th – TEST MARKETING! – Mid-afternoon I woke up, did some work and then went to pick up my ‘adopted grandma’ Shirley for evening church. We brought Roxy along too. Then we headed over to get dinner at Paty’s with my friend Jenalyn and her son Tyler. It’s fun talking about monsters and horror movies with Tyler because even at the age of 9 he’s keenly interested in the monster world. He’s a lot like my step-nephew-in-law Torin in South Dakota. Since the kids’ stories I’m writing are monster-based and aimed at his age group, I’ve been test marketing them with Tyler. And so far he’s really enjoying them. I even have gotten a few good ideas from him too! I gave Jenalyn and Tyler a tour of Planet Wallywood, and after they left I grabbed a nap. I got up and spent nearly 3 hours doing a TON of auditions for a videogame. I worked on-line a bit, did some on-line shopping and hit the hay. I’m heading to Palm Springs very soon and I can’t wait!

And how was YOUR week??! 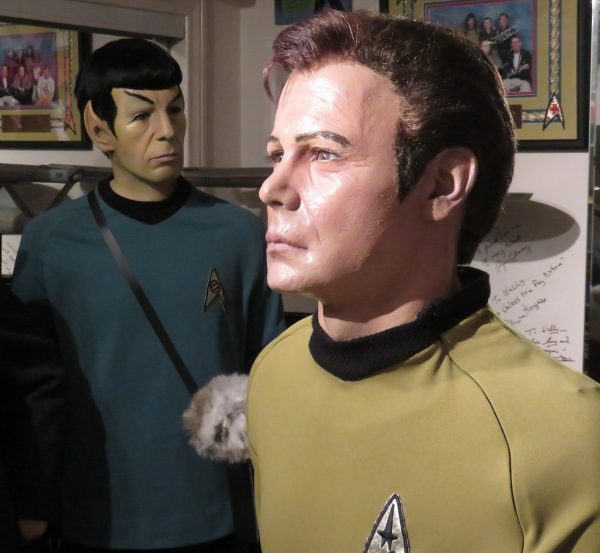 Now that the Captain is properly dressed, it was time to place him in his proper place in the Chaney Room! 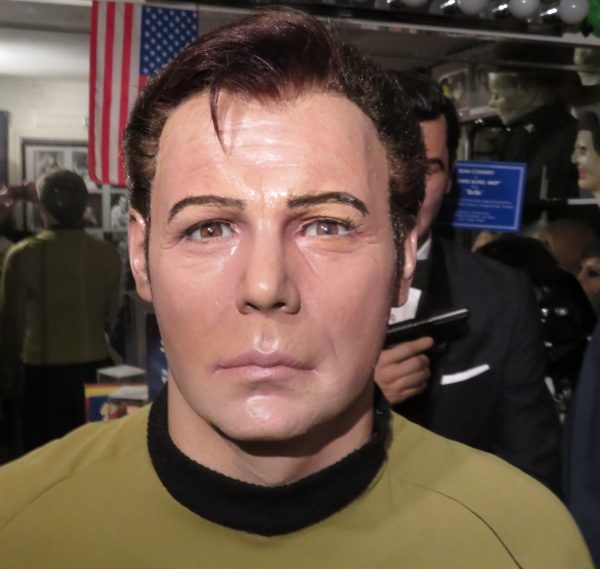 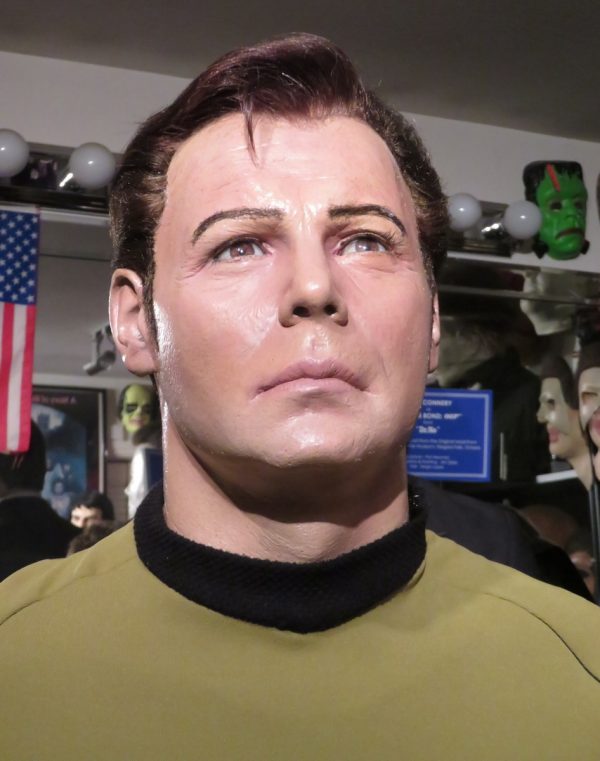 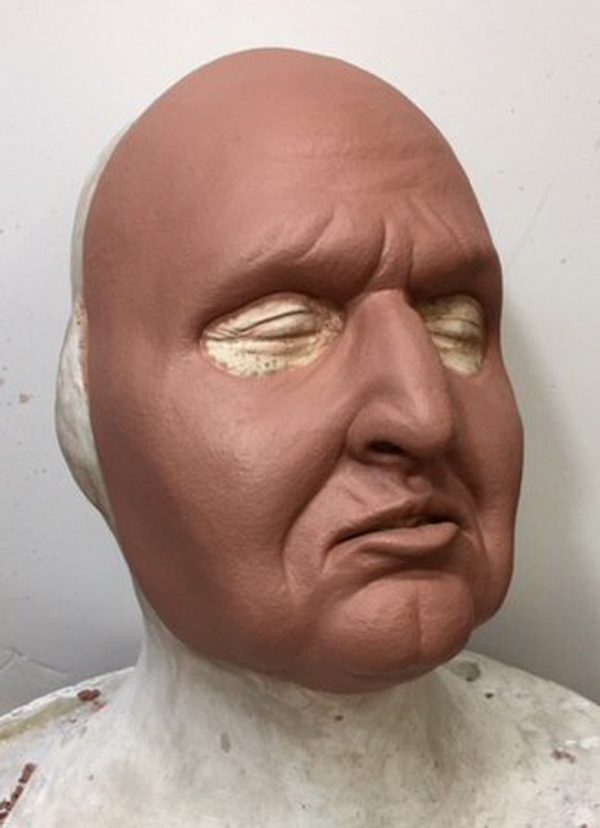 The mask I’m having created by my pal Jim Ojala is almost finished. The clay sculpture is finessed, molded, and the final pic is the silicone “pull” they took out of the mold. Now to paint it and add the hair. Fantastic! 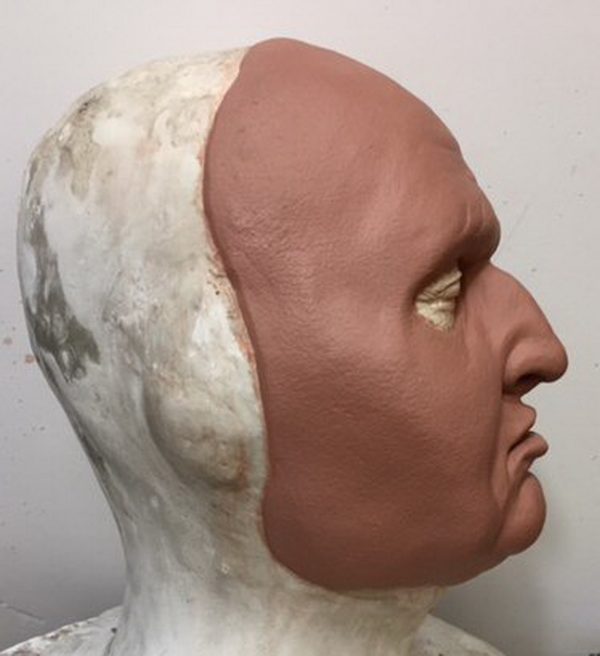 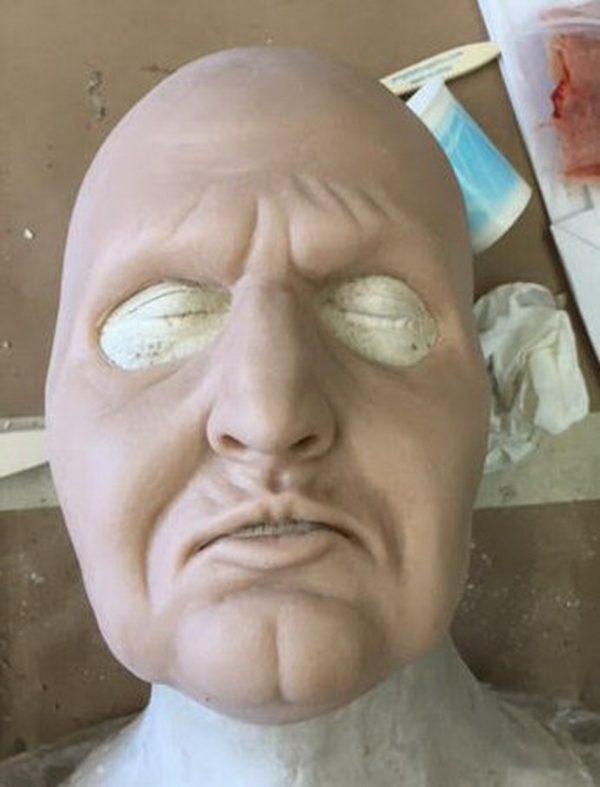