Back in the day we had amazing breakfast cereals! Grins, Smiles, Giggles and Laughs was one of those. Delicious! 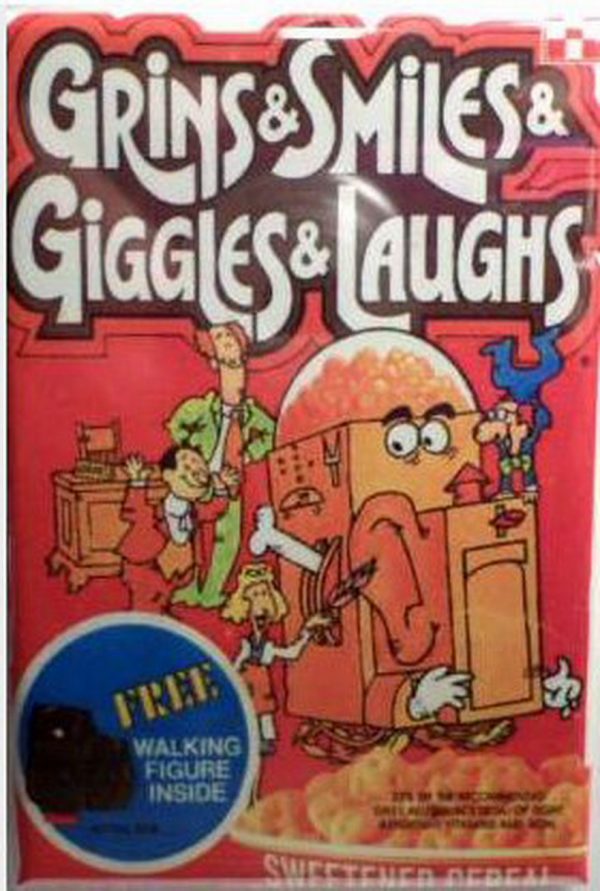 After watching “Skatetown U.S.A.” the other night at movie night, I was really taken by the amazing soundtrack. This song has always been an uplifting, positive tune and I really love it. McFadden and Whitehead did “Ain’t No Stoppin’ Us Now” back in the late 70’s and it has us all dancin’!

Tuesday the 1st – LEGO MY HEART! – Well, no rest for the wicked. After a whirlwind weekend in South Dakota at Siouxpercon, it was right back into the fray with an early session at Pure Imagination studios for a Lego-themed project. It took about an hour, and then I headed to KFC to get some early lunch. I drove over to Fast Signs to pick up my order of a new placard for a display in Planet Wallywood. Then I went to the cleaners to pick up my newly cleaned Gran Torino car cover. I hit my box to pick up the mail, then went home to do some work. I had some auditions to do and some writing to finish up. But the day quickly slipped away and by evening time I was ready for a nap. I was still bit jagged around the edges from the extra-busy weekend! I got up later to do a bunch of auditions and write Wally’s Week. I took Roxy out for our late-night stroll through the neighborhood and it was REALLY cold! Summer is truly over, I guess. Good thing Roxy’s got a lot of fur! I came inside and made a Chef Boyardee pizza-in-a-box and started watching the first season of “Police Woman” on DVD.

Wednesday the 2nd – DAY OFF!!! – It was nice to be able to lounge around all day and wake up at 2 in the afternoon. Since I had pretty much talked myself hoarse over the weekend it was good to be able to give the voice a rest anyway. Between the class reunion weekend over Labor Day, the Monsterpalooza weekend a few weeks ago, and now this past weekend at Siouxpercon in Sioux Falls, SD, my pipes could use a good long rest. (I’m thinking a trip to Palm Springs may be in order soon. Hmmm.) I spent the day answering e-mails, making phone calls, and eating leftover Chef Boyardee pizza. That stuff is AMAZING the next day! I started writing a new kid’s story I’ve been thinking about, did some auditions, and then grabbed a nap in the evening. I did some more auditions, and then prepped for my busy Thursday! My ‘day off’ was over.

Thursday the 3rd – SCREENING, SCARFING & SESSION! – Bright and early at 8:30am I was up and at ‘em! At 9:30 I was invited to an animatic screening of the animated feature we’ve been working hard on for over a year. Apparently the producers liked what they had assembled, and how the story and action were shaping up, that they were ready to screen the animatic for the cast and crew. An animatic is a movie made up from still sketches they created for the storyboards. They edit the single images together with a flow similar to how the final animated piece will look. They add sound effects, music, and minimal effects to give the crew an idea of how the finished product will look. I was very impressed with what they came up with and enjoyed it immensely! But I’m fully aware of how this business works, and what it’s become, so now I’m sure they’ll cast about for celebrity voices to replace everything the REAL Voice Actors did. I hate the fact that animation has become so celebrity-driven, considering that it makes absolutely no sense. Many celebrity performances I’ve heard in animation add virtually nothing to the character, and in fact they’re quite distracting in many cases. Because all you’re thinking about is the celebrity’s face during the performance and it’s difficult to get lost in the character that’s being presented through animation. I’ve been told by producers, casting people, agents, directors and writers that the celebrities are NOT their idea. It’s the idea of the marketing people who want to be able to attach a name to the project when advertising it. In fact, the majority of the producers, casting people, directors, and writers I’ve spoken with would prefer NOT to work with TV actors and celebrities, because they’re not ‘trained’ to do what we as VO Actors do…and it ends up taking twice or three times as long to get what they need in the performance. Oh well…hopefully it’ll change back to falling into the hands of REAL Voice Actors someday. I just hope I’m alive to see it. I got home at 11:30 to walk Roxy, and then my pal Edi picked me up to get lunch at Paty’s. Then she drove me to the Burbank Auto Dr. to pick up my repaired Gran Torino. Just a few fuses had to be replaced so it was very minor. Some wiring also needed to be replaced, because some of it burned up during the ‘jump starter’ snafu from a few weeks ago. I got my Torino and headed to Studiopolis in Burbank to do a few hours on an anime cartoon. The character was a real jerk, and those are always the most fun to play! After the session I went home to do some work, grab a short nap, and get up to do some work around the house and continue work on my new kid’s story. In the series of new stories I’m working on (which I can’t wait to tell you about when the time is right) I have 10 completed stories, written and recorded so far. This will be story number 11. I’ve narrated them and put music behind them to give potential licensors an idea of the flow of the story’s verses. I CAN tell you that they’re all Christmas-related, and done in rhyme scheme. I also did a bunch of auditions, and then headed to Denny’s to get some food to go. Then I came home to watch another episode of “Police Woman.” Unfortunately, it’s not getting off to a very good start. The writing is fairly weak and Angie Dickinson simply isn’t a very good actress. She actually seems like she’s sleepwalking through most of the show…not very committed or engaged in the scenes. And there’s virtually no chemistry among the main cast. I hope it gets better, but I’m going to stick it out at least through the first season for better or worse. I’m already missing my “Mod Squad” viewings.

Friday the 4th – ‘DOOR’ IS LESS! – Right at 1 I got up and prepared for a visit from my maids and the garage door guy. Both were supposed to arrive between 2 and 4. The maids arrived at 3, and the garage door guy arrived around 4. My one-piece garage door was becoming antiquated, and the automatic opener was becoming unreliable at best. It would stick, or sometimes not open at all. Time to replace it! I got a brand new, QUIET sectional door and it’s beautiful! Now when I go out to Denny’s in the middle of the night to get food I don’t need to worry about waking up my neighbors with my noisy garage door. Or worrying that I may not even get back in my garage if it fails to work correctly. Terry the garage door guy worked until almost 9pm – a full five hours! And he still needed to make some additional adjustments next Monday. But it’s working great. I got some food at Little Toni’s and met with my pal Emily Danyel, who handles actors for autograph shows. I wanted to discuss with her the cancer charity event we’re planning in Sioux Falls, South Dakota for next June and get her ideas about available talent. When I got home I napped, and then got up to finish my kid’s story and work around the house. When I hit the hay it was close to noon on Saturday!

Saturday the 5th – SKATETOWN U.S.A.! – My day started around 4pm with some prepping for that night’s movie night. We’d be watching a newly released Blu Ray print of 1979’s turkey “Skatetown U.S.A.” – which sounded like a craptastic way to spend a Saturday night! But first I walked over to my stylist Andie’s shop to get a trim, and then I enjoyed a Dole Whip at the fro-yo place next door! I was happy to hear that Dole Whip is now a permanent fixture at my neighborhood location! I got home and set up for movie night and the movie was just what we thought it would be…craptastic fun! The soundtrack was exceptional though, with all of the amazing late 70’s music. I took a short nap, and then got up later to do some work around the house. I made my traditional Saturday Night Super Salad and watched another episode of “Space 1999.” I’m realizing why I never embraced this show as a kid. The costumes are fairly unremarkable and it’s very light on action. There’s a LOT of talking. It’s far more cerebral than “Star Trek” was, which is why I probably never became a fan as a kid. But I’m enjoying the show simply from the standpoint of a “moment in time” kind of thing; a time capsule.

Sunday the 6th – SPACE BASE! – Once again I slept until about 4 (since I had just gotten to bed around noon) and I got ready for evening church. My ‘adopted grandma’ Shirley couldn’t pull free to join me, so it was just Roxy and I on our own walking over to the evening service. After church I was joined by my pals Brittney and Sara for dinner at Ernie’s Taco House. We hadn’t been there in a while and it was delicious! Really hit the spot! When I got home, my friend Pat Evans brought over the “Space Base” he had been working on for my Captain Kirk life-size figure. It looked gorgeous! We put Kirk on the base, fastened him down, and now all he needs is his freshly altered tunic and he’s complete! I got a short nap and then got up to record my auditions which were due first thing Monday morning. I also finished my 11th kid’s story and recorded the narration for it. My pal Scott will put the music behind it and my IP attorney will send it off to have it copyrighted and trademarked! Terry the garage door guy and some plumbers were coming in on Monday, so I hit the hay to be up early to meet them. My guest room shower in the Puppet Room was having a leak issue that needed to be addressed very soon! 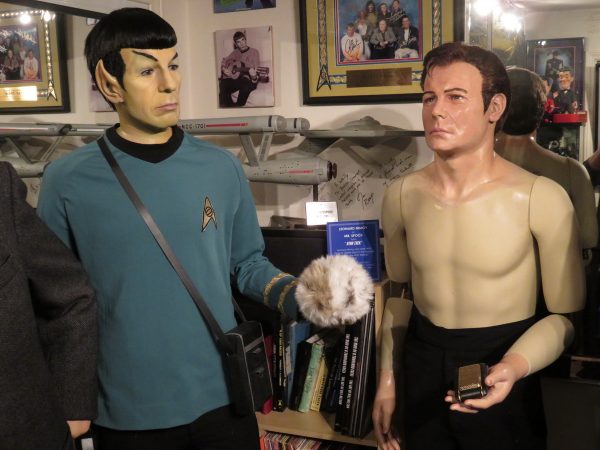 The Space Base created by Pat Evans creates the correct height differential between my Spock figure and my new Kirk figure. They were about 3″ apart in height in real life, according to our research. 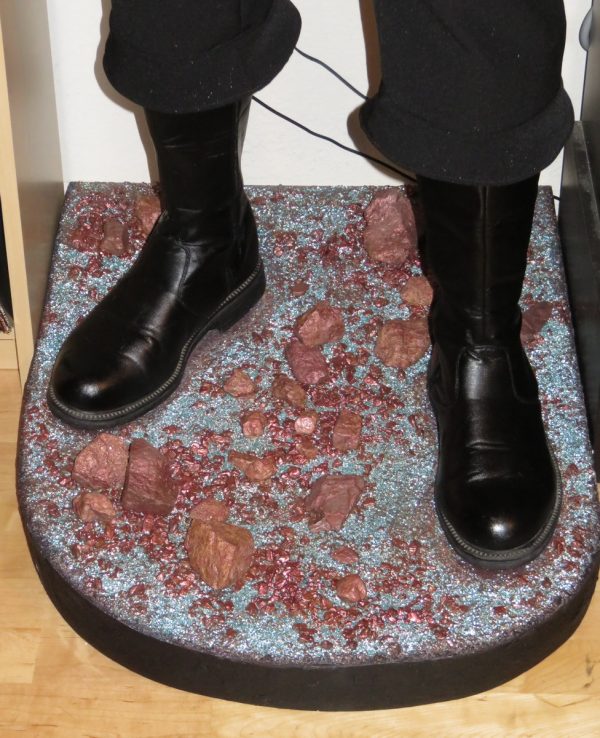 I wanted Kirk’s base to look “otherworldy,” like a planet surface that doesn’t look like anything on earth. Pat did a fantastic job! 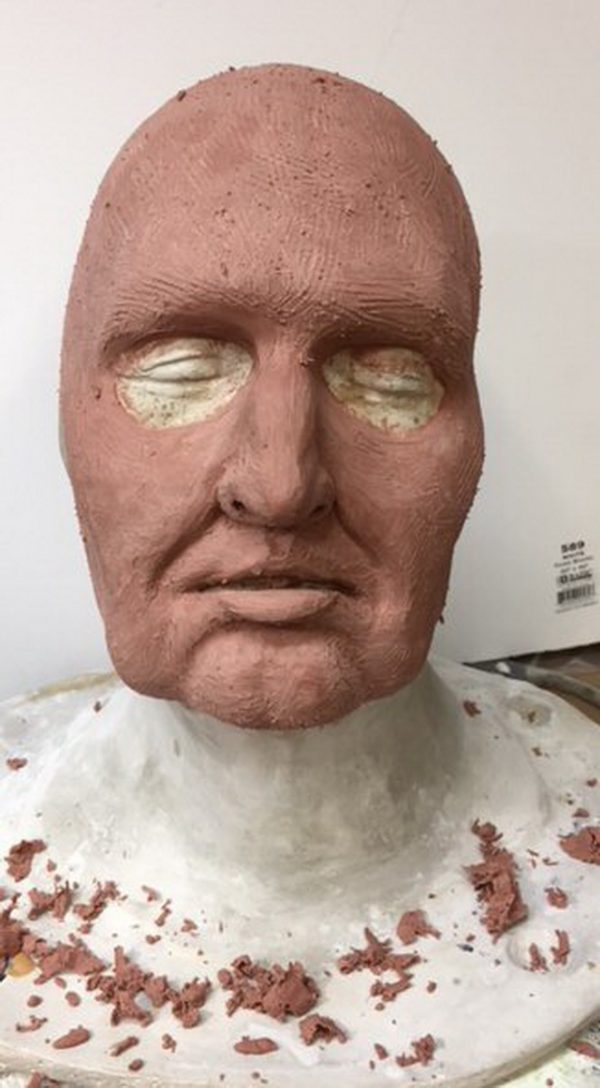 My effects guy Jim Ojala with a few ‘in progress” pictures for my Halloween costume. He’s creating a life-like silicone mask. More details to come!! 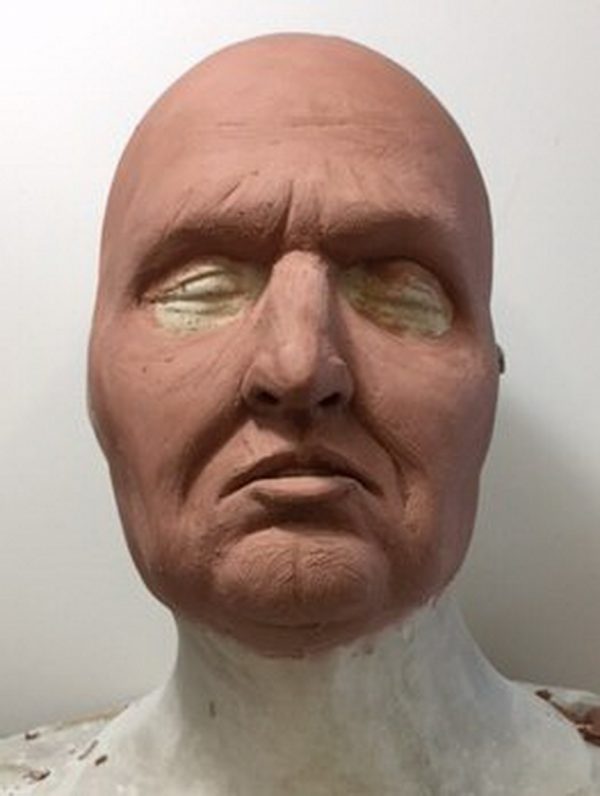 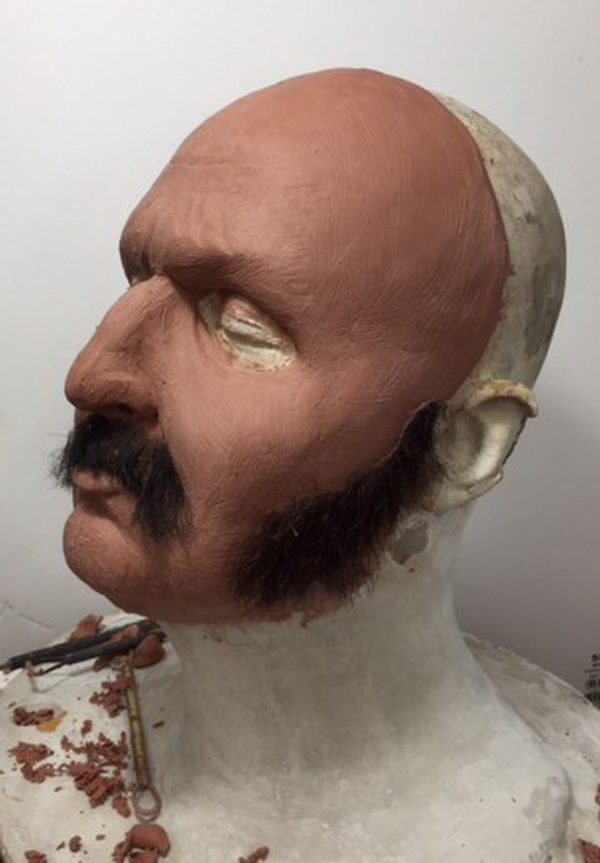 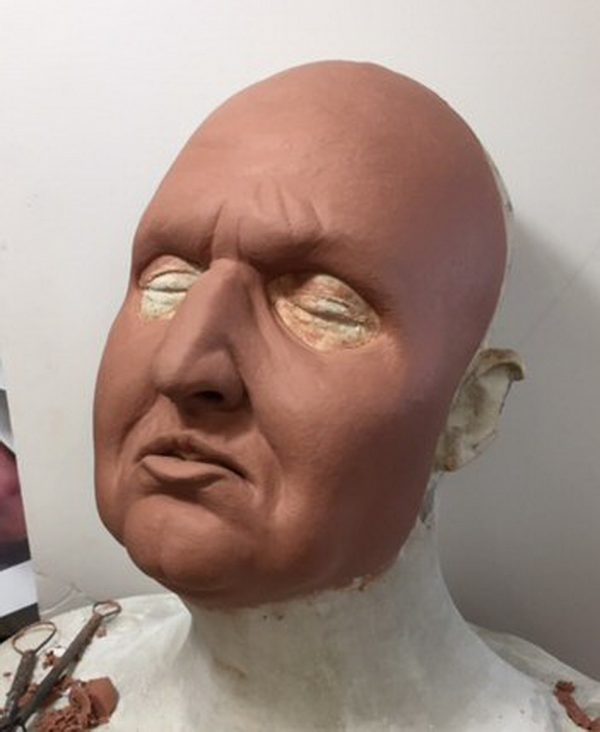 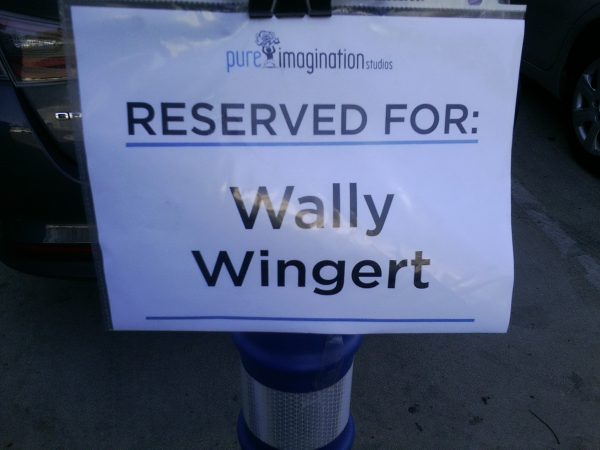 I always love seeing the creative signs they post in the parking spaces at Pure Imagination studios.