On the subject of Robert Conrad, I was pleased to have met him TWICE! Once back in 1987 when I was new in L.A. I was working at the Westwood One Radio network in Culver City, and I heard he was coming in to be a guest on “The Larry King” radio show, when Larry was on all night. I was there waiting when Mr. Conrad arrived. I told him that I used to play “Wild Wild West” with my pal Bob Japs in his basement. I was Arte, because I loved all the disguises, and Bob played Jim West. I got two autographs…one for me, and one for Bob. He signed the one to Bob…”To Bob. From the REAL Jim West — Robert Conrad.” He was quite funny and entertaining. I had met him years later at an autograph show, but by then his health had deteriorated quite badly. But he and his macho swagger is sorely missed in today’s marshmallow world! 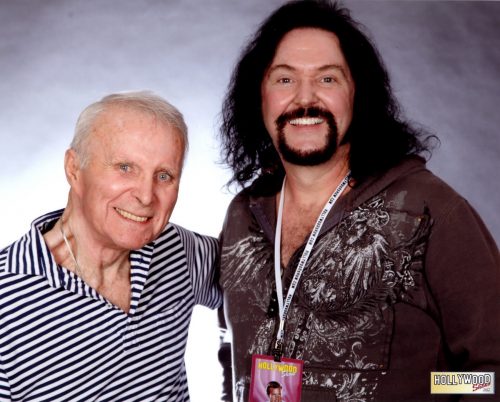 Monday the 3rd – WINDY WINTER! – With the wind howling outside and banging my windows blinds around something fierce, it was a little difficult to get too excited about going outside. It was sunny enough, but the wind was incredible. AND COLD! And with all the wind, dense blankets of particulates swirl around in the air, making my allergies go nuts! So figuring it was best to stay indoors, I just lounged around all day, answering and composing e-mails, doing miscellaneous work around the house, and chilling out. Later my pal Sara and I went to get dinner, and then I came home to do auditions. I typed out Wally’s Week and then fed and walked Roxy. It was even COLDER outside! I’ve lived in L.A. for 33 years this month, and I don’t EVER remember it being this cold! It gets down to about 38 degrees at night while I’m walking Roxy. I came back inside and got on my Shutterfly account and started designing the Mega-Sampler for my kids’ books. I had completed the Mini-Sampler a few weeks ago and was very happy with the results, but it only focused on 8 of our 13 stories. This new Mega-Sampler will have snippets from all 13 stories in hopes of attracting a publisher and toy company! By the time I finished it was about 7am, and I hit the hay.

Tuesday the 4th – SHUT-IN AND SHUT UP! – It was another day of staying inside getting work done around the house. I sent my old 4gb iPod in for repair to have the battery changed. This will be the third battery it’s had, as I’ve gotten THAT much use out of it. But on my walks it was shutting off after about 20 minutes, no longer able to hold a full charge. I ordered a Domino’s pizza, grabbed a shower and watched the State of the Union speech on TV. I grabbed a nap and then got up later to do a ton of auditions. It was rather nice to have a few days to myself to get some personal things taken care of. I ate some “safe snacks” and watched an episode of “The Mod Squad.” (“Safe snacks” are those that have been proved to not create acid reflux before lying down – yogurt, bananas, popcorn, apples, cottage cheese, etc. I’ve found that when I eat too close to bedtime the acid reflux burns my vocal cords and puts me out of commission for about a week. So NO MORE! Plus, the winds and my allergies don’t help either.)

Wednesday the 5th – EUREKA! – Around noon I woke up coughing (those damn winds!) so I walked Roxy, took some cough medicine, watched the impeachment vote on TV and then slept some more. That cough medicine really knocked me out, as I slept until 6:30! I recorded my auditions and worked around the house. I decided not to wait for the people at the effects studio to come back, they were away working on a film, so I started working on completing my Oscar the Grouch’s eye blink mechanism myself. The first Oscar I made had to be trashed because it didn’t work. The second Oscar I made utilizing a contraption of bolts, washers and nuts will have to be taken to the effects house for finishing. But the third Oscar I made utilizes the oldest eye blink mechanism known in puppetry. This is the one I did totally by myself. It seems to work the best. I call it the “pull tab” method. I made some bends in the armature wire, constructed a small ring (large enough to go around my middle finger’s first joint) and laid it in alongside the wires coming out the backside of the eyeball pieces. I taped them up temporarily to see if they’d work, and VOILA! They did! I grabbed a short nap, and then got up later to glue all the “joins” together permanently with Barge glue and leather strips. I fed and walked Roxy, did a little more puppet work, and then hit the hay.

Thursday the 6th – STUNT STARS! – At 1 I drove the Gran Torino over to Jerry’s Famous Deli to meet with a few stunt legends, Justin Derosa and Charlie Picerni. Charlie is one of the great stuntmen of our generation, but has also acted and directed in a bunch of projects. But to me, he’s mainly known as the stunt driver of the Gran Torino in the “Starsky & Hutch” TV show! When I was driving my Torino through a parking lot last week to get some groceries, I spoke with a guy who commented how much he loved my car. Come to find out his name was Justin Derosa, a stuntman, who knew Charlie very well. He said that Charlie was coming to town that weekend to do some work in a few TV shows. He asked me to join then for lunch so I could show Charlie my car! We had a fun 2 hour conversation, and then the surprise! Charlie was blown away by my Gran Torino. We got some fun shots with him in it, and he even signed the interior of my car! I drove over to my seamstress Shelley’s house to give her my leather cap and a bunch of green Oscar fur so she could get started on making my Oscar the Grouch baseball cap! It will literally look like Oscar is sitting on my head, similar to the Rowlf the Dog cap I made last year. I came home for a nap, and then met my friend Helen so she could fill out corporate paperwork so she could start doing assistant work for me in the future. I did a little more work on Oscar, prepped for my meeting on Friday, made some lasagna, walked Roxy, and then headed for bed.

Friday the 7th – THE RIDESHARE KILLER! – Today I’d be driving out to Agoura Hills to meet with Ashley Meyers, the writer and director of the movie “The Rideshare Killer” in which I did a small scene late last year. He was kind enough to consent to releasing some rough footage of my scene for my new Actor Reel. On the way I’d be picking up my pal Tuesday Knight to go out with me so we could all have lunch. Tuesday starred in the film, and was kind enough to “find” me a part in it. On the way to pick up Tuesday I called my old boss Phil from the old radio days. We laughed a lot about all the fun times, great music and exciting adventures when I was a young radio DJ in South Dakota. I picked up Tuesday and we headed to Ashley’s. I gave him my hard drive, he started the transfer, and we went to have Mexican food at a local restaurant. I drove back home and made phone calls on the way, and when I reached home I did a little work around the house. I napped for a bit, and then got some groceries at the store. I got back home and did some cleaning up for the maids, who’d be arriving Saturday around 1. I did some work on Oscar 2, but then had to stop when I was getting too frustrated. Oscar 2 will be going to the effects house next week to see what they can do to make him work. It’s very feasible that I will have two, complete and functional Oscar the Grouch replicas in the near future! I made some chili cheese dogs on the grill outside, did some more work on my kids’ book layout, and then went to bed after the proper amount of time allowed for my food to digest. NO MORE VOICE PROBLEMS FOR ME!!

Saturday the 8th – DOUBLE DEDICATION! – Just before going to bed early Saturday morning, I read on-line that Robert Conrad had passed away. So I made a last minute programming decision for the Planet Wallywood Saturday Night Movies to run an episode of “The Wild Wild West” along with “The Villain” for our Kirk Douglas tribute. Two legends are now gone. Though the maids were due between 1 and 3, they arrived around 3:10pm. Which worked out perfectly. When they finished around 4:40 I showered up and walked to my stylist’s studio to have Andie give me a touch up on my color. I got home and started organizing for movie night. When everyone left I napped briefly on “The Most Comfortable Couch in the Universe,” and then started doing a bunch of arduous accounting work, scanning of checks, reconciling my bank statements, and prepping a deposit for Monday. Since I’m only allowing myself to eat two times before bed in any given week (and never on a consecutive night) my Saturday Night Super Salad was prepared for a viewing of “Space 1999.” While I used to eat before bed literally every night while watching an old TV show, those days are done.

Sunday the 9th – FRIENDS, FUN AND FOOD! – Shortly after 4pm I woke up and opened the door for my friends Joe, Zandra, Jamison and Audrey to come visit. Joe and Zandra’s grandson Jamison had developed a recent love for puppets, so after seeing my posts about building an Oscar, she wanted to bring him and his cousin Audrey up for a visit for “puppet talk.” We all went to church, and then crammed into the Torino to get dinner at Little Toni’s. We came back home and chatted about making puppets, performing puppets and I gave Jamison a puppet that I had bought last year at the Henson Studios’ show “Puppet Up!” After they left I napped for a bit, got up to spend all night recording auditions and working around the house. I got to bed around 7am Monday morning. 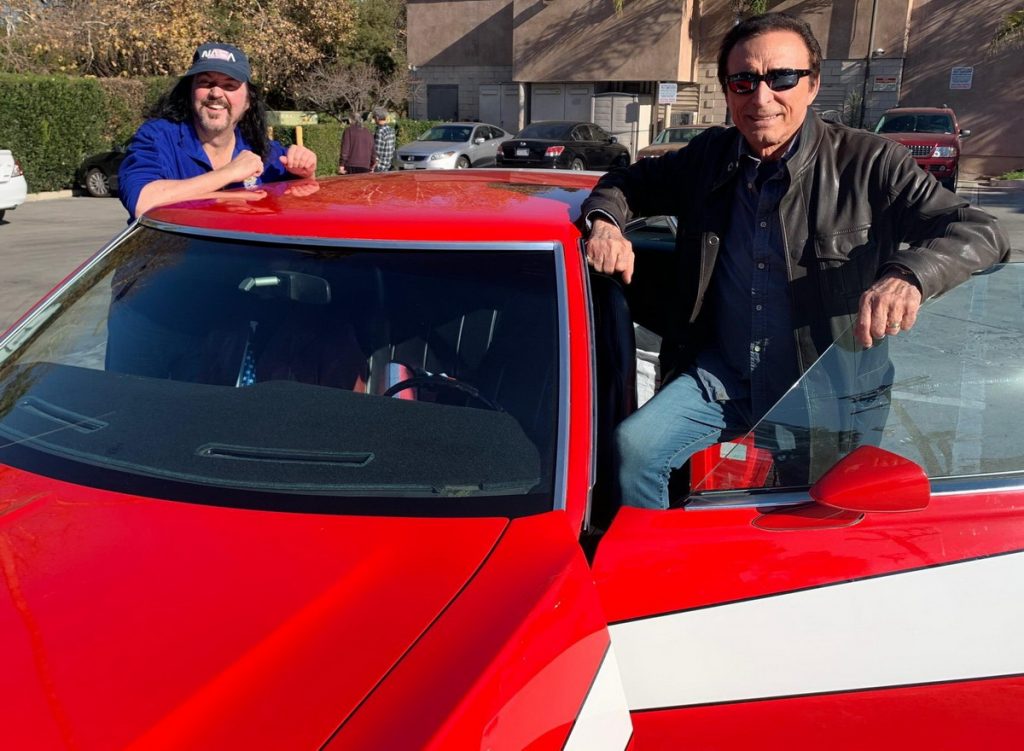 Meeting the great stuntman/director/actor Charlie Picerni this week was fun and terrific. OH the stories! He really needs to write a book! 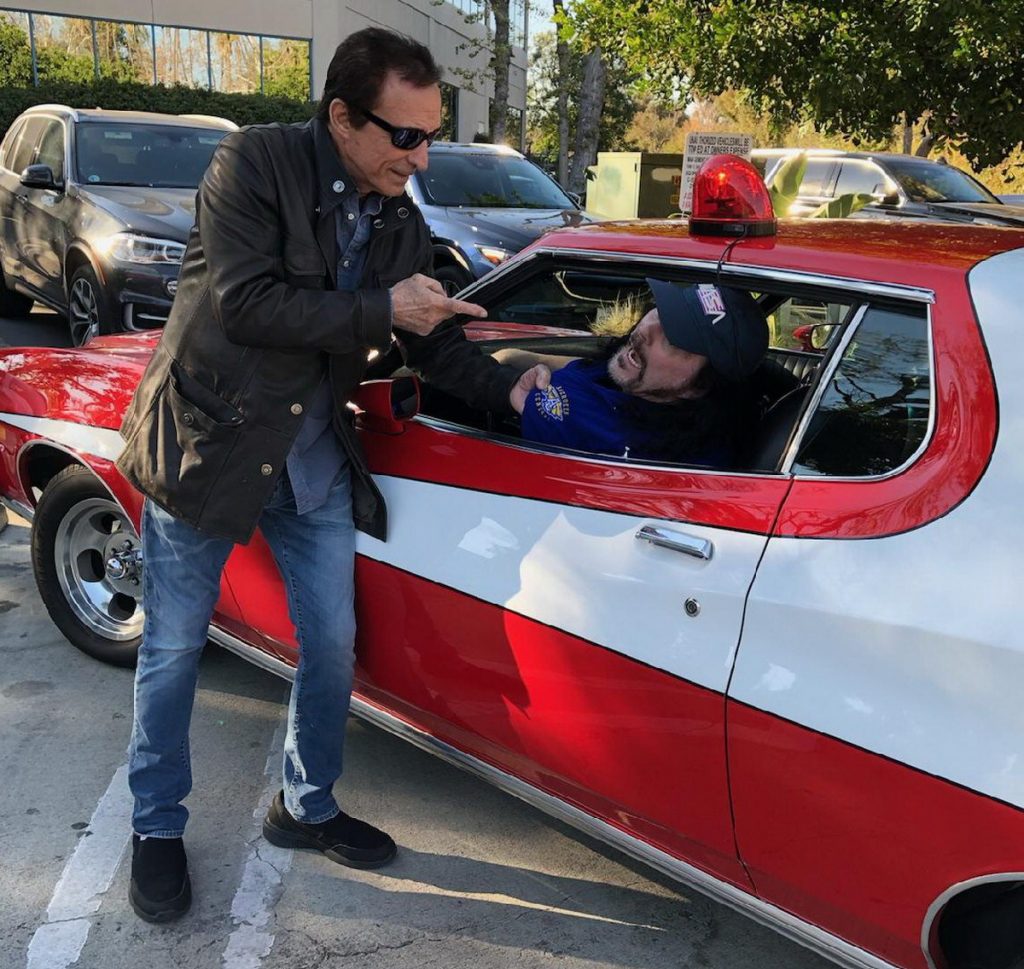 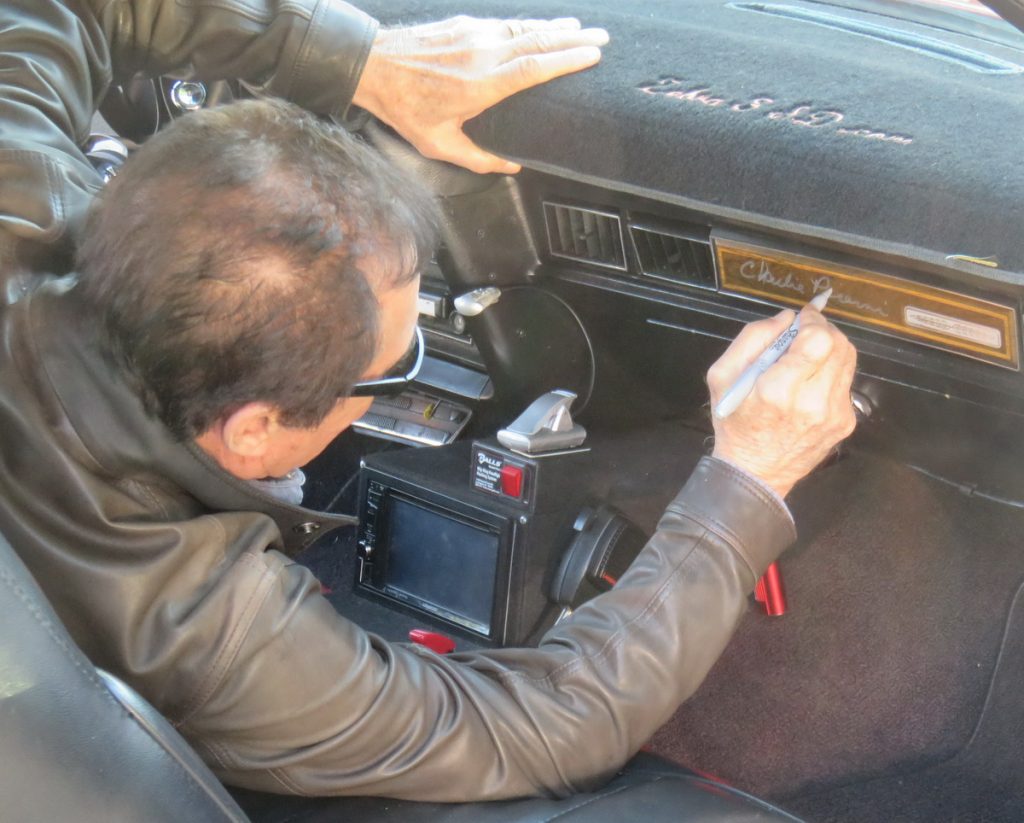 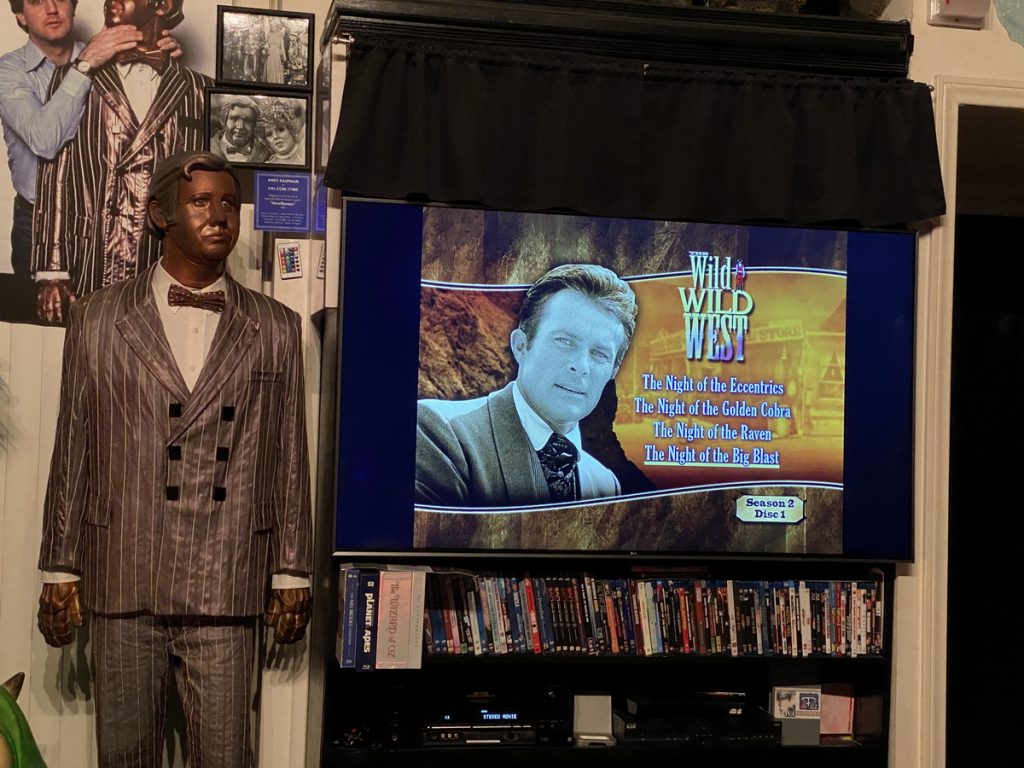 Though I have more sculpting and trimming to do on the head (I wanted to wait until I was happy with the eye blink mechanics) I’m on my way! Now that the mechanical issues have been surmounted, I will start sculpting and building the rest of Oscar’s head with foam. More progress shots coming soon!