My folks were checking in on my sister’s animals while she and her family was away for the holidays. This is a great shot of my dad and my sister’s cat Plumper. Spook has the same reaction to him whenever he visits my house, much to the chagrin of my mom – who Spook completely ignores! 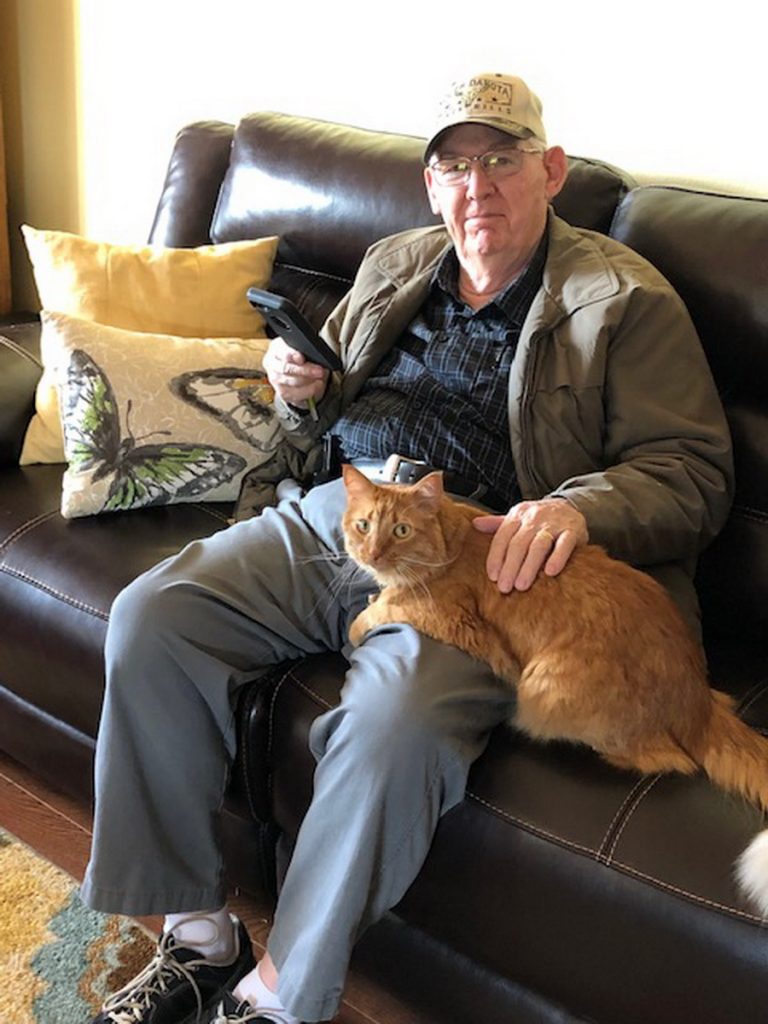 While I’m building my Oscar the Grouch puppet, I can’t help but sing “I Love Trash,” one of Oscar’s finest moments on Sesame Street!

Monday the 30th – MIDDLE OF HOLIDAY WEEK! – Just after noon I got up to make a call to a local agent regarding a Voice Actor we want to include in our “Voices Against Cancer” fundraiser for the St. Baldrick’s children’s cancer organization this June in South Dakota. We’ve already announced that “The Greatest Living Voice Actor” Frank Welker will be attending, and we have many more exciting actors which will soon be added. More on that coming soon. After the call was over I had planned on going to my effects guy Jim Ojala’s studio to get some work done on my Oscar puppet, but he told me he wasn’t coming back to the shop until Thursday. So I did a little bit of work and then napped on the couch. The middle week between Christmas and New Year is always an odd one; some people are working and some are not. So I’m taking the opportunity to just be lazy. I got up later to deal with e-mails, phone calls, and some more work on my kid’s project, which my attorney will be taking to New York in February. We’re trying to get everything lined up so she can take book and toy samples with her when she goes. I typed out Wally’s Week (TWO weeks’ worth!) and hit the hay! After all that, my eyes were starting to cross!

Tuesday the 31st – THE DOC AT ROB’S! – In addition to being a huge Laurel and Hardy fan, my pal Dr. Alan Cowen has always been a big fan of George “Superman” Reeves. I arranged to have my pal Rob Klein show his original Reeves Superman suit, muscle undersuit and “flying pan” to the doc during a tour of his amazing collection. Doc was beside himself and upon seeing the costume, became a 10 year old kid again! I get it! We sat around at Rob’s for quite a bit and chatted about all sorts of fun stuff, but then Doc had to go to prep for a New Year’s Eve event. I went over to Bob’s Big Boy to meet Rob and his wife and son for lunch, and then went to the groomer’s to pick up Roxy. Not realizing the groomer’s were closing early for the day, I just barely got there before they closed! WHEW! I went home to prep for my own New Year’s Eve gathering; a double feature of fun, craptastic movies. Once we ushered in 2020, most everyone left and I took a nap on “The Most Comfortable Couch in the Universe.” I got up later to do some work around the house, then I made some hot dogs on the grill and watched another episode of “The Mod Squad.” The first season was amazing, but now that they’re into the second season it seems like the writing staff has made a conscious decision to only write “activist” episodes; social issues that they’re presenting to try and influence their viewers’ minds. I much preferred the first season when it was just a great 60’s cop show. I don’t want to relax to watch a TV show to be preached to. I know that things like student’s rights, domestic abuse & illiteracy are big subjects, but I’m just trying to eat a few hot dogs and relax with some mindless entertainment before bed. I’m hoping the “activist” episodes in the second season are few and far between.

Wednesday the 1st – 2020; THE YEAR OF SEEING CLEARLY! – Knowing that I had nothing going on, I enjoyed staying up all night New Year’s Eve (listening to the fireworks going off all over the city of Los Angeles) and sleeping all New Year’s Day. In fact, I didn’t get up until 6pm! I fed the kids, and though I had planned on going to a late-night screening of “Star Wars” with my pal Edi, she left a message stating that she was in for the night. (Edi’s not the night creature that I am) So what’s a guy to do? I went back to bed. And it was MARVELOUS! I slept until 11pm. This is the trap I always fall into during Christmas/New Year’s weeks…I stay up all night and sleep all day. When the time comes after the holidays to adjust my schedule to be awake during the daytime hours for work, it’s a big of a struggle to retrain myself. But I do every year. I stayed up all night working around the house and also designing a sample book my attorney will be handing out at Toy Fair to show off our kid’s stories. I went to Denny’s to get some food to go and came home to watch another “Mod Squad” adventure. It was a sad one too…THEY BLEW UP THE WOODIE! The old car they had through the entire first season was destroyed in this episode. Too bad. I loved that car.

Thursday the 2nd – HOLIDAYS ARE OVER…KIND OF! – The day started with an audition (sometimes they happen during these “off” weeks) and then I went to my box to pick up my packages. I went to Jim Ojala’s effects studio to have him do a little work on my Oscar the Grouch puppet. I needed to have some metal parts on the blinking mechanism I built whittled down a little bit. He showed me how to prep the eyes for painting, and I was on my way home to do some work. This Oscar will be the most complex puppet I’ve ever built, but it’s worth it! I’m learning so much! After doing a few things around the house I grabbed a short nap on the couch, and then worked for several hours organizing the basis for our sampler book. I’m trying to get as prepared in advance as possible, so when we upload the elements to the bookmaking site it’s just a simple job of “cut and paste.” Jim had given me a few scrap pieces of stuff called L200, which is a spongy, but rigid material. I cut a few small pieces and put them in the upper mouth plate of my Oscar so my other fingers would have something to grip on to while my middle finger was blinking the eyebrows. I wrote some more on my new kid’s story and then I went to bed.

Friday the 3rd – BUILDING A BOOK! – Around 1 I headed to Culver City for an appointment at Regenix to have them check my hair follicles. I really love their products and I’ve been using them for about 12 years. But since the “holiday light” traffic was so good, I made it down there in record time. I had about a half hour to dine at my favorite Mexican restaurant called Campo’s. After lunch I went in for my appointment and got my needed supplies. But the traffic back home was FAR from “holiday light,” so it took me the usual hour to get back home. I guess the holiday lull is officially over. Before I went home I stopped at Kit Kraft and talked to my pal Mikey about the proper paints I needed for my Oscar the Grouch eyes. It has to be a specific type of paint and sealer that won’t interact negatively with the type of glue I’m using to fasten them into the foam rubber face. I got home and relaxed a bit, and then my pals Mark and Connie came by for a quick tutorial on how to use the Shutterfly book building program. I had made many hard cover books back in the mid 2000’s through a company called My Publisher (who eventually went out of business) so my recall was coming back to me. After I decided I grasped enough of the concept we all went to Coral Café for dinner. With a full tummy of yummy food I came home to crash on the couch for a bit. But when I got up I worked all night on building graphics and elements for a wonderful sampler book. It was a blast and it turned out pretty amazing, if I do say so myself. I really can’t wait to tell you more about it! I got to bed eventually mid-Saturday morning.

Saturday the 4th – SUPER SAMPLER SATURDAY! – Once again I slept all throughout the day. I got up early in the evening to feed the kids and get ready for a wrap party for the indy movie I just worked on. I got there around 8 and chatted with everybody for a bit, but then somebody decided they were going to run an hour and a half movie. So a wrap party turned into a screening party, but since they weren’t screening the movie we worked on I really didn’t have much interest. I wanted to talk with the cast and crew members of the film. So I went outside to hang out with a few of the cast and crew who also didn’t want to watch a movie. When it got too chilly to stay outside, I went back in for a bit, noticed that the movie was still running, and quietly slipped out the side door to go home. It was an odd wrap party; probably one of the weirdest I’ve ever been to. But…whatever. It allowed me to get back home more quickly to finish working on my sampler book. I grabbed a short nap, got up later to do some more work on it, made my traditional Saturday Night Super Salad, and watched an episode of “Space 1999.” I’m really trying hard to like this show, but it’s really hard.

Sunday the 5th – CONFERENCE CALL-ATHON! – A little bit before 4 I got up to prep for a conference call with the “Voices Against Cancer” team in Sioux Falls, South Dakota. Figuring that the call would take about an hour or so, it would still give me time to clean up and head to evening church. But there ended up being a LOT to discuss, as we forge our way into this amazing event, that I didn’t get off the phone until 6:20. I just barely got showered and over to pick up my “adopted grandma” Shirley after church ended. We went over to Jerry’s Famous Deli to get dinner. They must’ve been having an off night, because the bread on my sandwich felt like it had been left out to dry, and the only iced tea they had left was that nauseating passion fruit junk. I guess everyone has an off night sometimes. When I got home I napped a bit, and then got up to record an audition. Having completed the first 12 stories in my set of kid’s stories, I needed to finish the final one. So I started in on it and wrote all throughout the night. I also made some cuts in the foam on the face of my Oscar the Grouch puppet, and I can finally see him taking shape! Shortly after the sun came up, I went to bed.

And how was YOUR New Year’s week?!! 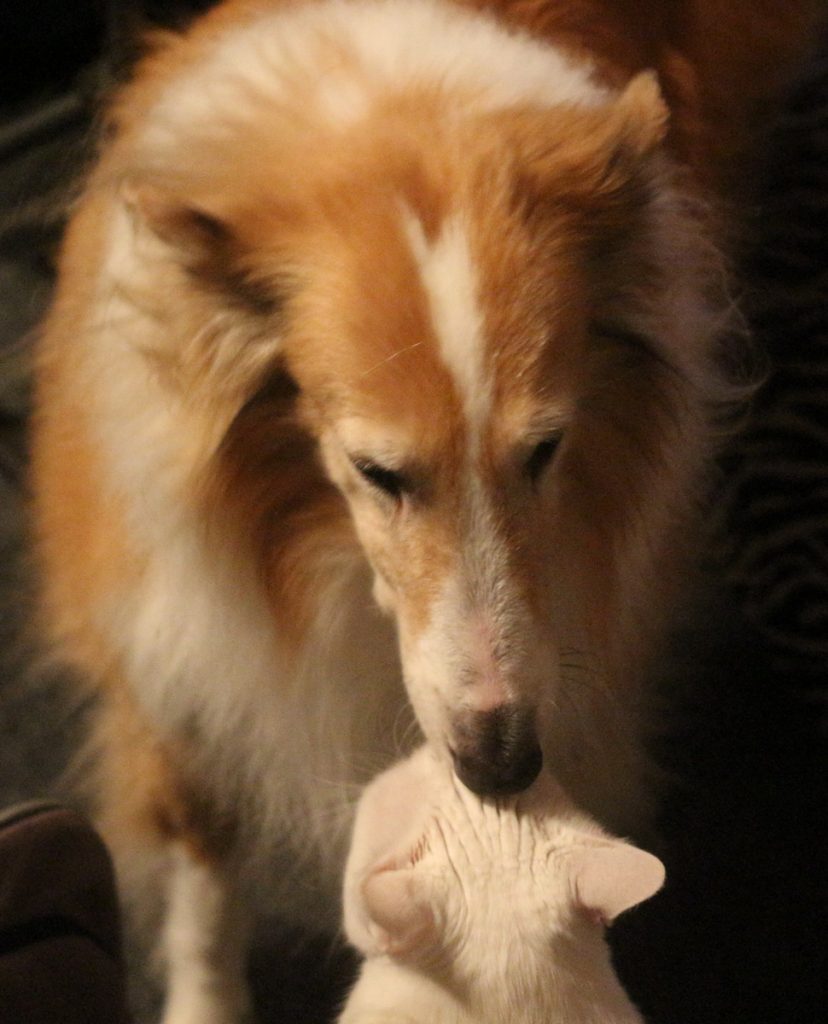 Of all the New Year’s Eve kisses from around the world, this is my favorite…Roxy and Spook! 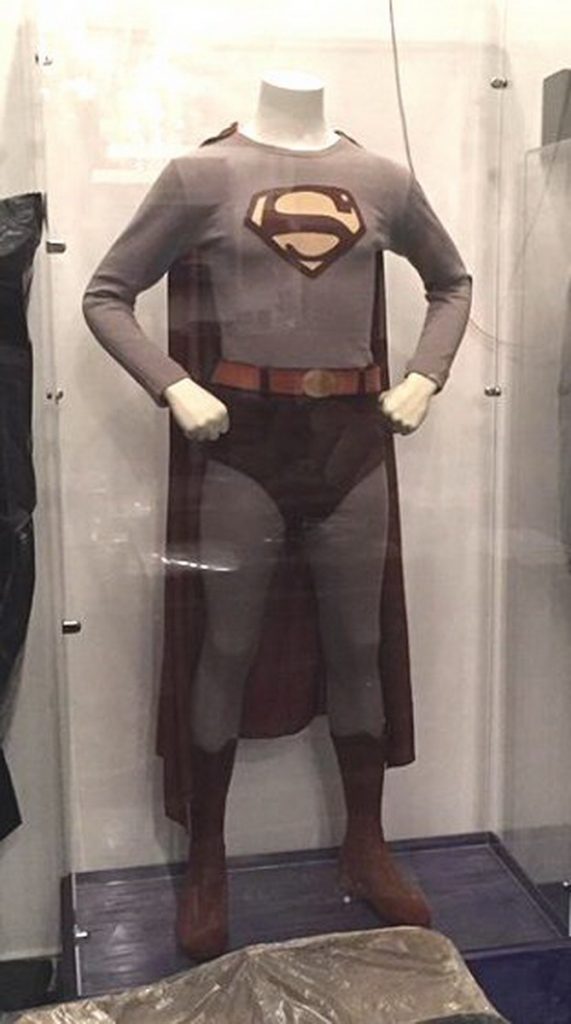 Here’s a shot of the George Reeves Superman suit in my pal Rob’s collection. 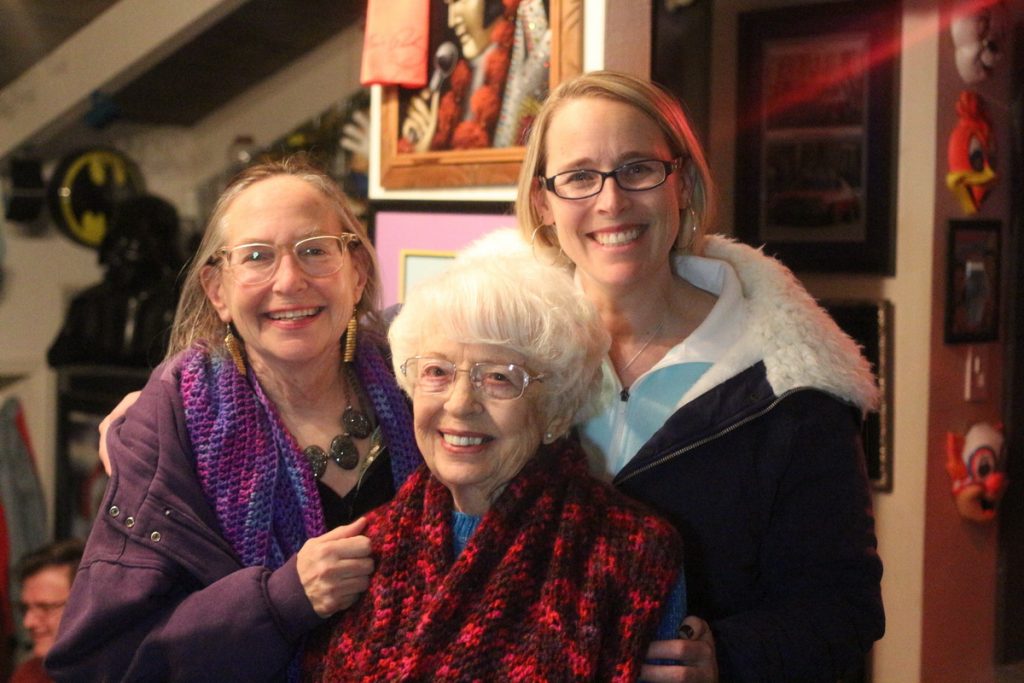 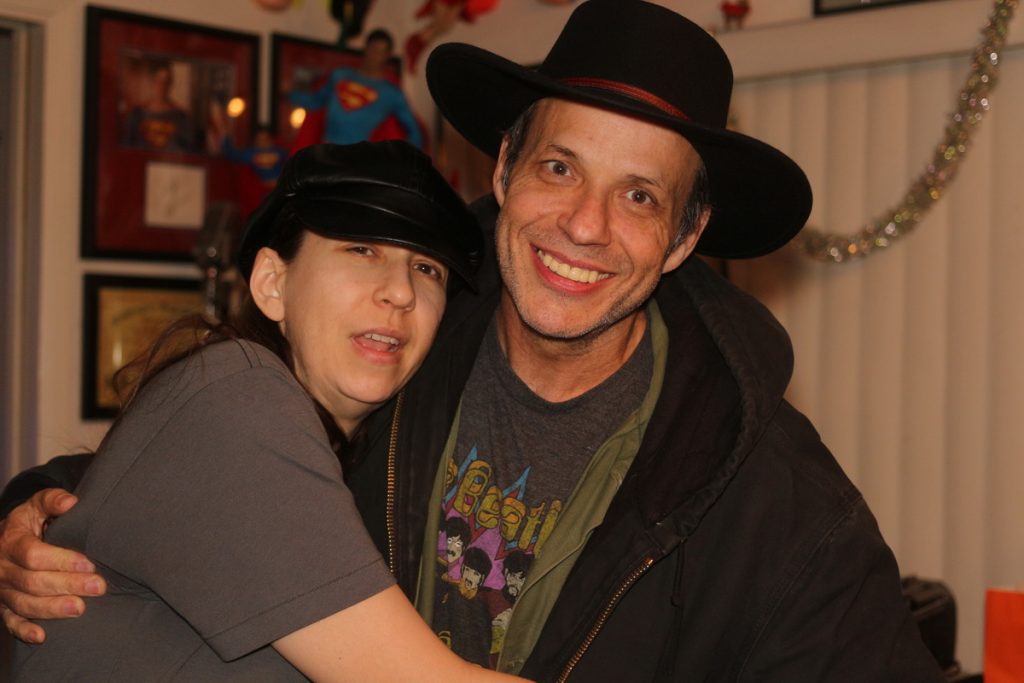 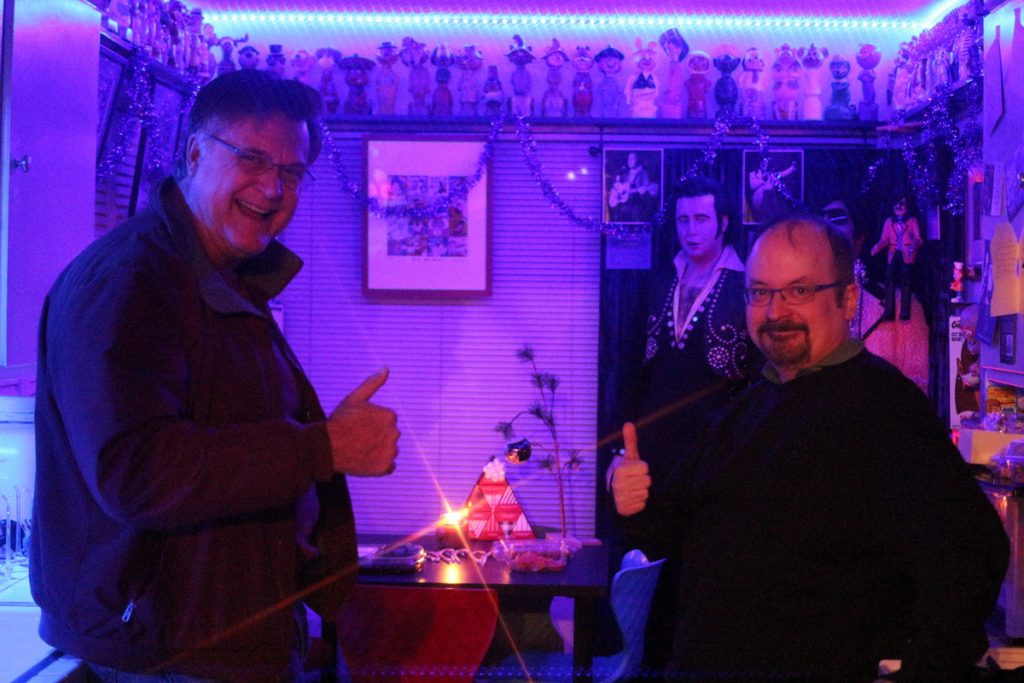