While walking Roxy one late-night, I saw this amazing spider web. I think my spider loves me!

Since we started watching “The New Scooby-Doo Movies” on the recently released Blu Ray set at my Saturday night movie nights, I can’t get that theme song out of my head. It’s interesting to note that, while you see the Addams Family in this version, on the Blu Ray they cut the Addams Family out. Something about not being able to get the rights or something. But here is the opening in its original form!

Tuesday the 3rd – 22 YEARS AND HOLDING! – The day started just after noon with some miscellaneous work, a few auditions, some photo editing from my fantastic Class Reunion trip, and then I drove to Chin Chin to get some fried rice before my session. Then I went over to Voice Trax West to narrate another special for Multi-Media Assemblies, a traveling in-school feature that encourages kids to take charge of their lives, stay off drugs and drive safely. I’ve been narrating these for about 22 years now and they’re always fun. They’ve appeared in school assemblies all over the country and have been seen by countless kids. In fact, some of the kids who saw them when they were in school, are now school PRINCIPALS! Amazing! It’s a great cause and I’ll continue doing them as long as they want me. After the session I went to CVS to get some supplies, and then I went home to feed the pets. I did a few more auditions, worked around the house, and grabbed a short nap. When I woke up I had several more auditions to do, I typed out Wally’s Week, made a pot pie and watched another “Mod Squad” episode before bed.

Wednesday the 4th – A COMIC BOOK LEGEND! – After sleeping in most of the day, I got up late in the afternoon and answered some e-mails, recorded a few auditions, and went to pick up my ‘adopted grandma’ Shirley so we could go to JoAnn’s fabric to pick up some specific cloth for a new bowling shirt I’m having made for the upcoming Son of Monsterpalooza weekend. Then we went for dinner at Barone’s. While we were there, I saw comic book legend Neal Adams walking to a nearby table. I told our server that the guy in the blue shirt was one of the most legendary comic book artists of my generation, and whatever he was drinking was to be put on my bill. I watched as the server told him his drink was paid for by an appreciative fan, and then he looked over at me and raised his glass! I gave him a thumbs up and a smile. Neat! His comic book art is some of the most memorable imagery of my entire life! I have an original Batman sketch I bought from him at a Comic Con several years ago, and it still makes me smile when I see it on my wall. After a delicious dinner I headed home to rest. I was still a bit worn out after my whirlwind trip to Aberdeen, South Dakota for my class reunion. But it was worth it! When I got up I fed the pets, did my auditions, heated up some leftover Barone’s pizza and watched another “Mod Squad” episode on the DVD set.

Thursday the 5th – WOW! SHORT WEEK! – I couldn’t believe it was already Thursday! I dropped some fabric off at my seamstress Shelley’s house, and then came home with the intent to feed the pets and head right out and get some groceries. But I ended up chatting on-line with an old friend from the Aberdeen days and time flew by. Still a bit tired around the edges from the trip, I got a short nap. I got up later to do work around the house, record my auditions, I did a little prep for the maids’ arrival on Friday, and then I hit the hay!

Friday the 6th – FRY DAY! – L.A. finally got its hot summer weather, but I don’t mind it. The maids arrived just after noon, cleaned up, and by 2 I was on my way to Lancers to have lunch with my pal Edi. Then we went shopping at a place called Playclothes in Burbank so she could find an old west dress for an upcoming function in Arizona. She and her husband Elliot will be going there next weekend to participate in the event with her family. The first dress she tried on was perfect. Those folks at Playclothes really know their stuff! I got some groceries and then headed home to unload. I fed and walked Roxy, and checked my e-mail. The radio station in Aberdeen, South Dakota that hosted my 6 hour radio show let me know that the entire show was archived and up on their website. I had fun listening to the hours I did live. After a nap I went to Denny’s to get some food to go, and then came back and watched a fabulous episode of “The Mod Squad” with guest star Sammy Davis Jr.! It was amazing!

Saturday the 7th – “DOG” DAYS OF SUMMER! – Since I had been up very late (or early!) I slept most of the day away. When I got up later in the day I got prepped for that evening’s movie night. We watched the first episode from “The New Scooby-Doo Movies” on Blu Ray. It’s the series that featured animated celebrity guest stars like Davy Jones, Laurel and Hardy, and Sandy Duncan. Then we watched the sequel to “A Dog’s Purpose” called “A Dog’s Journey.” What a beautiful film. We all enjoyed it immensely. After my guests left I took a short nap on the couch, and then spent all night doing work around the house. Then I made my traditional Saturday Night Super Salad and watched the final episode of “SNL” from the fourth season DVD set. I think this will be the last episode of “SNL” I’ll be watching, seeing as how the cast changed in the fifth season. Maybe I’ll get the fifth season DVD set, but I’m not sure yet. I’m going to start watching “Space 1999” on Saturday nights in the coming weeks. And then I might start watching “The Saint” with Roger Moore again. Even though I’ve seen every “Saint” episode, they’re always fun to watch.

Sunday the 8th – GET ME TO THE CHURCH ON TIME! – Normally I rely on my cat Spooky to wake me up in time for church on Sunday evenings. Since the time I need to be up to make the evening service is right around his feeding time, he usually has no compunctions about walking all over me until I wake up. But for some reason, he didn’t do that today. I sprang awake at 5:30 pm, the time the service starts, and jumped out of bed. I hastily fed the pets and hopped in the shower. It’s been a few weeks since Roxy’s been to church with me, and since it had turned cooler out, I put her in the car and we drove over to church. We walked in just as Pastor Louise was starting the lesson. Perfect! After the service I took Shirley and Roxy to eat at Paty’s. We had a nice meal on the patio, and it had started to get quite cool out. After dropping Shirley off at her residence I came home to do some work and grab a nap. (I’ll be darned but I’m STILL a bit worn out from my trip!) After catching up on some sleep I did my auditions, fed and walked Roxy, and then slept on the couch until the sun came up early Monday morning. I did some work for my website, and I edited some of the segments of my radio show so I can post the commercial free segments on my site. When I finished I hit the hay. In the coming weeks I have a weekend-long appearance at Son of Monsterpalooza, a Laurel and Hardy event, and a four day trip to Sioux Falls, South Dakota for an appearance at their Siouxpercon convention. When things finally slow down in October I want to get away to Palm Springs for a few days! 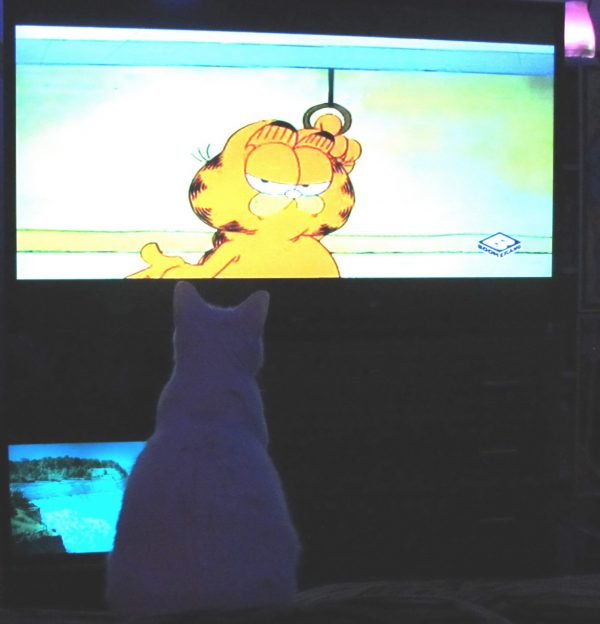 My cat Spooky loves watching TV with me. First…
…he seems obsessed with Garfield! Then… 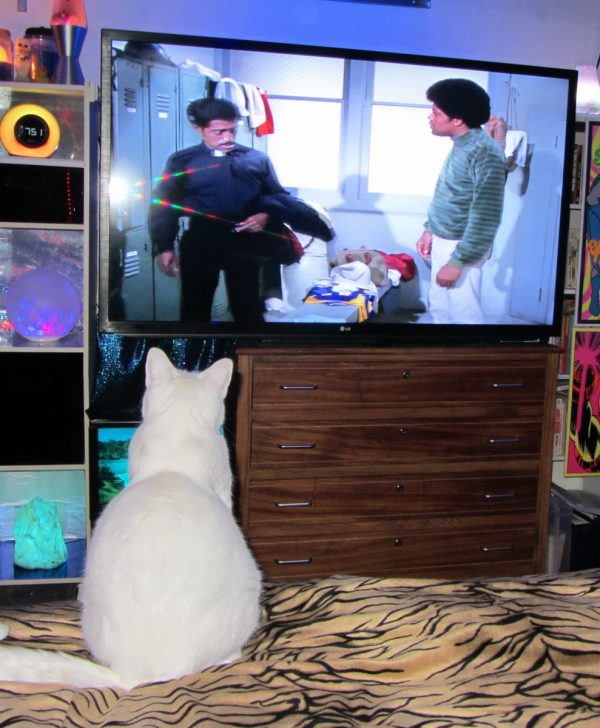 …he seems to know when he’s in the presence of legends!