My former dentist in Sioux Falls, SD is retiring, and at his retirement party he displayed this picture he took of me back in 1984 when he made me my first set of fangs. Thanks Dr. Koch! Happy retirement! 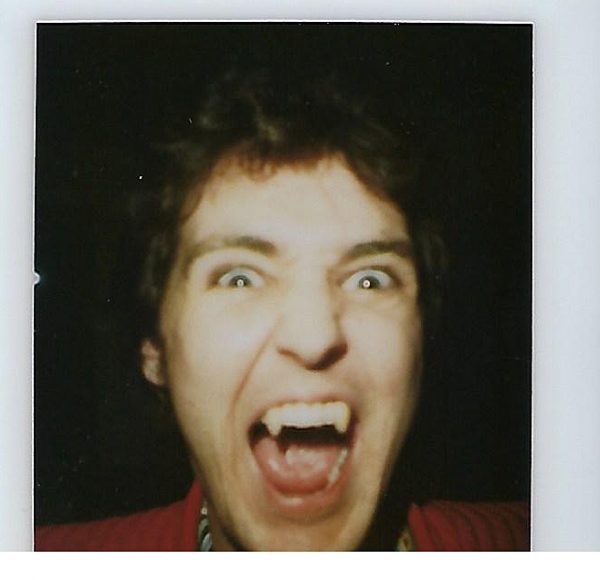 While on my walk this song by Chris Cornell came up. I had forgotten how “You Know My Name” is one of my favorite Bond themes. This song rocks! I want to rip it out some night at karaoke!

Monday the 6th – ANOTHER YEAR… – Even though a lot of the birthday hoo-ha happened over the weekend, today was my actual birthday. I was bound and determined to do something healthy, so I walked over to Voice Trax West to do a session for American Airlines, deposited some money in my bank accounts, and then walked back home. I just love it when a certain song comes on my iPod as I’m walking and I can really pick up the pace! My friends Scott and Vickie Sebring came over later to take me to dinner and even brought me a chocolate birthday cake! (So much for all the calories burned during my walk!) Oh what the heck…it’s my birthday. But I SWEAR I’m going to eat healthier tomorrow! I recorded my nightly auditions and then grabbed a nap. I got up later to type out Wally’s Week and then hit the hay. It’s going to be a VERY busy week!

Tuesday the 7th – DOUBLE DIPPER! – It was another early morning session, but this time at Dave and Dave for something called SAMHSA. It’s a government run addiction recovery entity. It was a very short session, so after I was wrapped I headed to Outloud Audio to pick up my hoodie that I left there the week before. I got some groceries, went home to put the groceries away, and then my seamstress Mariah arrived to drop off some shirts she had been working on. I did a little work around the house, and then headed off to Bang Zoom studios to do some more work on the digital assistant project we’ve been doing for about 4 years. Our director Kevin took some of my outtakes and strung together a groovy little rhythm track that makes me giggle every time I hear it. I can’t speak for him, but I’m sure he’d be more than willing to license it to some hip-hop artist for their next big rap tune. We worked for 3 hours and then I headed home to nap. Those early mornings really get to me. I got up later to do some work, made some buffalo mac and watched two episodes of “Taxi” that were darned funny! Then I went to bed.

Wednesday the 8th – THREE YEARS UP ALREADY?! – At noon I was over at Jerry’s Famous Deli meeting a graphic designer named Lexi for some work I need to have done. After lunch I drove over to get all the pre-op stuff for my upcoming colonoscopy on June 19th. Hard to believe 3 years has passed already! I had my last one in 2016, and since colon cancer runs in my family it’s necessary that I have one every 3 years, instead of the usual 5 years. And since I’m allergic to cancer, it’s something that has to be done. I stopped by my cleaners to get my comforter and then headed home. I did a little work around the house and then grabbed a nap. I got up later for my auditions, ate some soup while working on the computer and then hit the hay for the night.

Thursday the 9th – BACK TO BANG…ZOOM! – At 3 I was back at Bang Zoom studios in Burbank to do more VO work. The session flew by and when it was over I stopped at the Target across the street to pick up some supplies. I was starving so I stopped by Jersey Mike’s to get a #13 on white. I crashed out on the couch when I got home, then got up and spent some time working around the house and on the computer. I did my auditions, and then sacked out for the night.

Friday the 10th – THE NUMBER 11: PART 1 – The number 11 kept popping up all throughout the day. I wonder what that means. First off, I had a meeting in an office on the 11th floor. Today was my dog Roxy’s 11th birthday. And when I took my cat Spooky to the vet for his annual check-up after my meeting, he weighed 11 pounds. Strange! But Spook was not having any of it. Even when the Dr. tried to check his heart he was growling and hissing. Not sure why he was being such a grouch. Maybe the stethoscope was cold! Next time they suggested that I give him a sedative an hour before the exam to calm him down a little bit. I really hate having to do this every year. With Roxy it’s easy. He’s doing pretty good for going on 14, but like all cats his teeth are bad and he has the beginnings of a heart murmur. On a scale from 1 to 6 his heart is still at a 1, thankfully. But it’s something to watch. I think I can honestly say that Spook is the last of his kind, as I don’t think I’ll ever probably have another cat again. They checked his blood and urine and I’ll get the results back in a few days. I gave him a few treats to calm him down and we went home. Exhausting! I took a short nap and then had dinner with a friend ironically named “Cat” (that kind of Cat I’ll ALWAYS be up for hanging with!) at Jerry’s Famous Deli. And nothing that had anything to do with the number 11 happened while at Jerry’s. But after a 3.5 hour dinner, we figured it was time to head out. I got some food to go and dropped it off with a friend who had serious oral surgery that morning. I got home and napped a bit, and then got up later and had spaghetti and watched a few episodes of “Taxi.”

Saturday the 11th –THE NUMBER 11: PART 2 – On Saturday the 11th, I woke up at 2:11. So I’m going to keep my eye open for other 11’s that pop up throughout the day. Very strange. Here’s what Mr. Google says about the significance of the number 11… In the Bible, the number eleven is important in that it can symbolize disorder, chaos and judgment. 11 in numerology is the most intuitive of all numbers, it is associated with awakening, initiation, psychic ability and keeping the faith. Hmmm…I think I’ll opt for the latter and not the former. I went back to sleep and snoozed until 5. I needed the rest as it was quite an exhausting week! I cleaned up the whole house in anticipation of movie night, and we watched “Brigadoon” on Blu Ray. My sister Bonnie Jean was named after a song in that show, and since her birthday is 2 days after mine, I figured it would be fun to watch it. Plus, it just came out on Blu Ray. When everyone left I grabbed a nap, and then got up later to do some laundry, wash dishes, wrote some on my Labor Day radio show, and then trimmed the ears on my Rowlf the Dog puppet. While watching “The Muppet Show” earlier, I noted how clean the edges of Rowlf’s ears were. There wasn’t any shagginess at all. So I got some real sharp scissors, and cut the way my hair guy Sergio told me to cut fake fur…cut INTO the hairs, not across. It worked, and it ended up looking really great! I walked Roxy and then made my Saturday Night Super Salad, watched an episode of “SNL” from the fourth season and turned in.

Sunday the 12th – SUN ON SUNDAY! – Even though the past week was almost completely overcast, the sun came out today and it looked beautiful! I got up in time for evening church and walked over with Roxy. Then Shirley and I went to grab dinner at Paty’s. After I took her home I returned to my house, did some work into the evening, and then grabbed a nap. I had to be up very early to visit my doctor’s office to complete my physical, so when I woke up from my nap at 6am I just stayed up working on my children’s book project until it was time to go. Have I mentioned that I really hate these early morning appointments??