Watching the “Li’l Abner” movie reminded me of doing the play back in 1979 and all the fun we had at the Sioux Falls Young People’s Theater presentation of the musical. Fun days indeed! An amazing summer all the way around! Here I am as Abner. 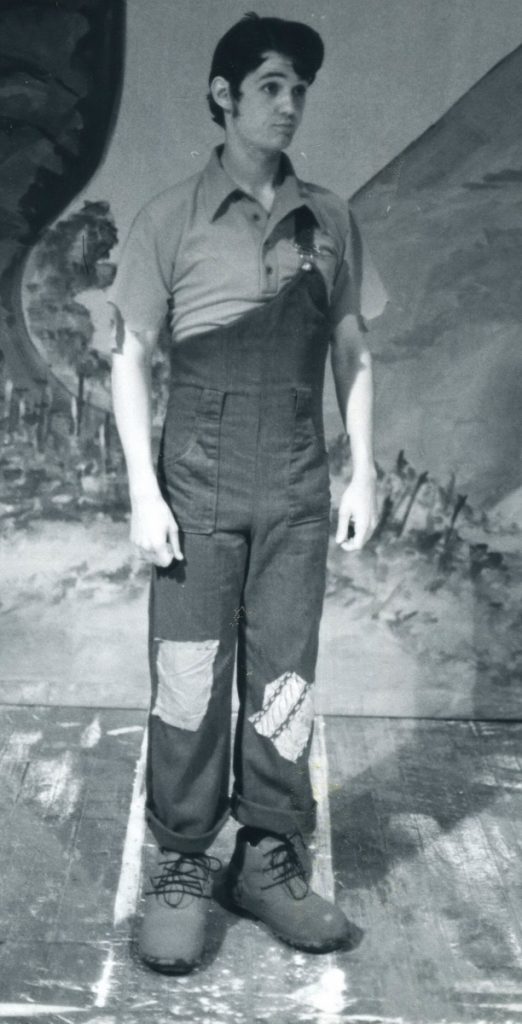 It was a lot of fun watching “Li’l Abner” at movie night, and I had this song stuck in my head all weekend long. It’s a catchy tune, and the lyrics are hilarious! And if you watch closely, you can see a young Valerie Harper in the group of Dogpatch wives (wearing the orange dress) before her “Rhoda” days! This is “Put ‘Em Back” from the musical “Li’l Abner!”

Monday the 6th – A BEAUTIFUL DAY IN THE NEIGHBORHOOD! – When I woke up at noon I started prepping checks for a deposit. Then I walked to Panera to have lunch with my pal Edi. It was an absolutely gorgeous day, and perfect for a walk! After lunch I strolled to the bank to make a deposit. On the walk home I met all sort of cool dogs, and people seemed in a generally good mood; seemingly positive about the new year ahead. I came home to work on some graphics, and then my pal Brittney Powell came over to assist with some work I needed done. I grabbed a short nap, and then got up to record a bunch of auditions and type out Wally’s Week. I have a big week coming up with four straight days of voice work on a new animated feature. Since I have to be up around 8:30 every morning for the 10am session, I hit the hay. At times like these my normal “nocturnal” schedule needs to change considerably, and it’s a bit of an adjustment to accommodate to the new hours.

Tuesday the 7th – TRACKING THE SCRATCH! – The alarm went off at 8:30am (normally when I’m going to bed!) and I was on the road to the recording studio in Hollywood by 9:15am. I got there about 9:30; traffic was THAT good! So I had a chance to get something to eat, relax and prep for the four hour session ahead. It’s a new animated film for a super-secret, MAJOR franchise. A videogame will follow soon after. I was cast as the main villain, and the entire cast will lay down what’s known as “scratch tracks” to begin. We will work for the next four days; four hour sessions each day, to record the voice tracks that motion-capture actors will mime to in the mo-cap studio. When the animation has been completed (sometime around spring) we’ll go back in the studio and re-record our lines to the finished animation. VERY EXCITING! The first day we read through the script a few times to get the feel for the story. The producers had already created an “animatic,” a video timeline containing still shots and conceptual drawings of the show. I can honestly say it’s the first time in my career that I’ve worked this way, and it was very interesting. Syncing our voices to a pre-determined sequence of events in the film was very challenging. But it mostly seemed to work quite well. After the session I went to Arby’s in Hollywood for lunch. I no longer have an Arby’s by my house, so it’s a rare treat! I got home and did some work and made some calls. I napped from 6 to 10 (still trying to get my head wrapped around these early sessions) and then got up to finish the design for my children’s book sampler prototype (which my attorney will be taking to Toy Fair in New York in February) and place the order for the final, printed book through Shutterfly. I did my nightly auditions, did some miscellaneous work around the house, and then went to bed.

Wednesday the 8th – DAY 2: THE REAL DEAL! – It was the second day of sessions for the super-secret animated film. And while we did a casual “table read” of the script on Monday, today was the day the rubber hit the road and we laid down the tracks for real. It went very well and this film is going to be amazing when it’s released! We worked until 2 again, and then I sped home to walk Roxy. I spoke with my accountant a bit to calibrate our focus for the new year, and then Roxy and I went to Paty’s for lunch with my pal Alex Zsolt, who was in town for the Burt Ward Hollywood Star ceremony on Thursday. I got my mail at my box and then headed home to do some work and grab a short nap. When I got up I did my auditions, organized all my 2019 tax receipts and pay stubs, filed them away to make room for my 2020 tax receipts and pay stubs, paid some bills, wrote my movie night invites, walked Roxy and headed to bed.

Thursday the 9th – DOUBLE DUTY! – On the third day of the session for the super-secret “BIG franchise” animated film, we continued voice tracking at a studio in Hollywood. We wrapped for the day at 2, and once I again I headed over to Arby’s for lunch. As luck would have it, I had a second session that day for a radio commercial at a studio in Hollywood about 2 miles away from the studio where we recorded the animated feature. I enjoyed a nice, leisurely lunch, and strolled into Studio Awesome at 3 to do the radio commercial. We worked until 4 and then I headed home to do some work and grab a nap. Later I got up to do some work around the house and then hit the hay around 4am.

Friday the 10th – HAPPY ANNIVERSARY…TO ME! – Today marked the 33rd anniversary of the day I first rolled into L.A. from South Dakota to start my life in Hollywood back in 1987! I drove out over 5 days in an old white station wagon with 110,000 miles on it. I literally made it through the grace of God, as that old car couldn’t have made it any other way. But again, it was a Ford, and those don’t die easily! As I looked back on the past 33 years and all the fun and amazing experiences that have occurred, I made note of how thankful I am for this journey. The fourth and final day of recording for the animated film went very well, and again I hit Arby’s for lunch on the way home. I got back just in time to meet up with the maids, and they cleaned Planet Wallywood thoroughly. After they left I did a little more work and then napped all evening. It was a fairly exhausting week, all considered. I got up later and did some grocery shopping (thank God for all-night grocery stores!) and hit Denny’s to get some food to go. I treated myself with dinner and an episode of “The Mod Squad” for a week well done, and 33 amazing years in Los Angeles!

Saturday the 11th – IF I HAD MY DRUTHERS! – Around 2 I had a lunch meeting with my old pal Joe Garner, and then hit the local CVS to get some supplies on the way home. While I was waiting for my prescription, I was listening to the names being called on the P.A. system letting people know their prescriptions are ready. When the pharmacist said, “Prescription for Van Halen is ready,” everyone stopped what they were doing and turned to see if Eddie Van Halen was there! But it was another guy named Van Halen who came to the counter. For a second there, I thought I was going to have a major rockstar sighting! I went home to prep for movie night, and we watched the 1959 film version of the Broadway musical “Li’l Abner.” I hadn’t seen it in a long time and it sure brought back good memories. In 1979 I played Abner in a stage version in Sioux Falls, South Dakota. And though the film is just slightly different than the stage presentation, the similarities sure brought back good memories! When everyone left I grabbed a nap, got up at 3am to feed the kids, and then laid down and slept again all through the night. The busy week had caught up to me!

Sunday the 12th – READY TO ROCK! – Mid-afternoon I woke up and did some more work on my final kid’s story in my series of 13 stories. I headed to evening church with Roxy, and then Shirley and I went to Bob’s Big Boy for dinner. The Cobb salad I had was a bit shy on bacon and tomatoes; very strange. I took Shirley back to her home and then came back to Planet Wallywood to do some work with my assistant Sara. When she left I grabbed a short nap, got up and recorded close to a dozen auditions, and then continued to work on other stuff all through the night. Since I didn’t have my traditional Saturday Night Super Salad on Saturday night, I had it tonight and watched another episode of “Space 1999.” The water in our complex was going to be off for four hours on Monday morning (for repairs to a water main) so I wanted to make sure to sleep through the hours it would be off. 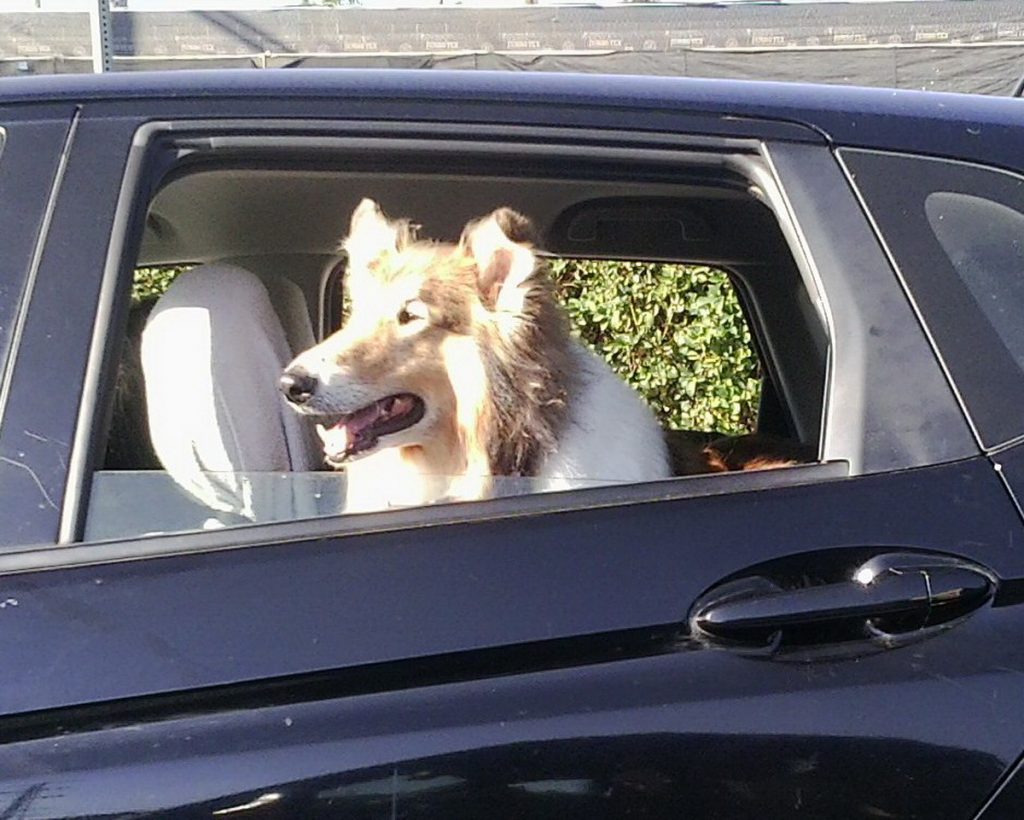 Have you ever been stopped in traffic, and then you look over at the car next to you? You see that long hair. Those big, beautiful brown eyes. That smile. And then you fall totally in love? It happened to me this week on the way to the session for the animated film I was working on. TRUE LOVE! 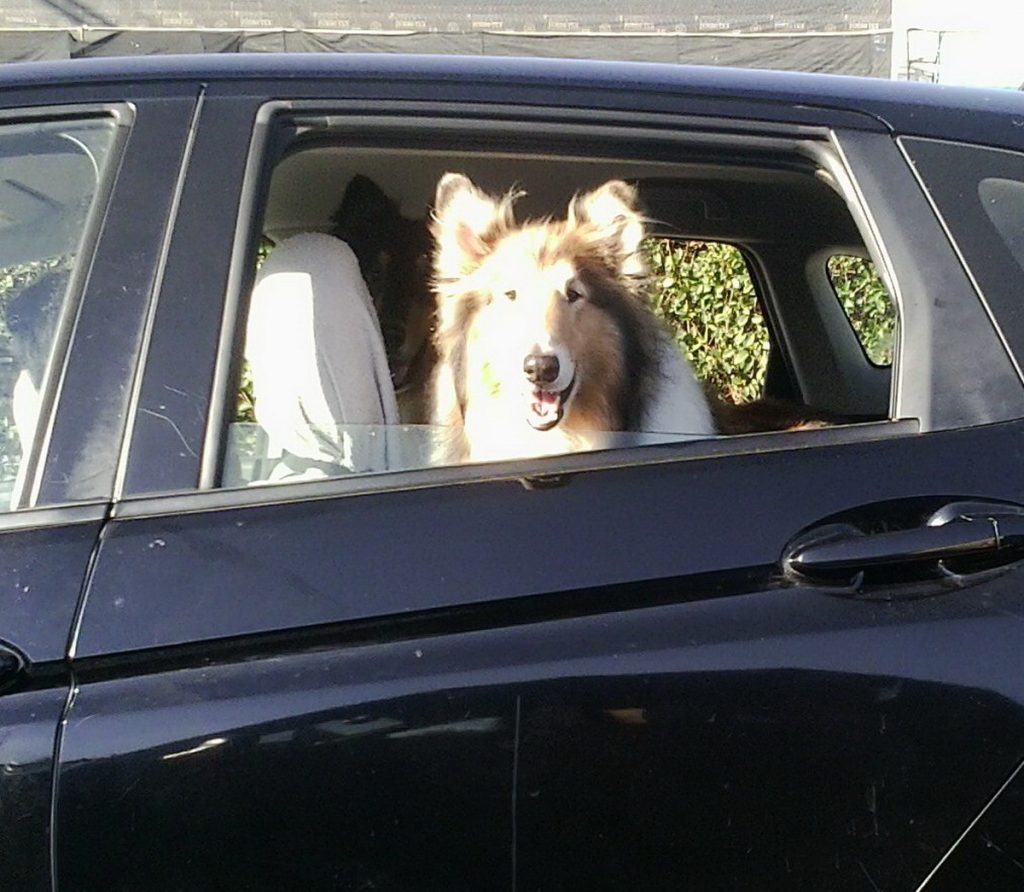 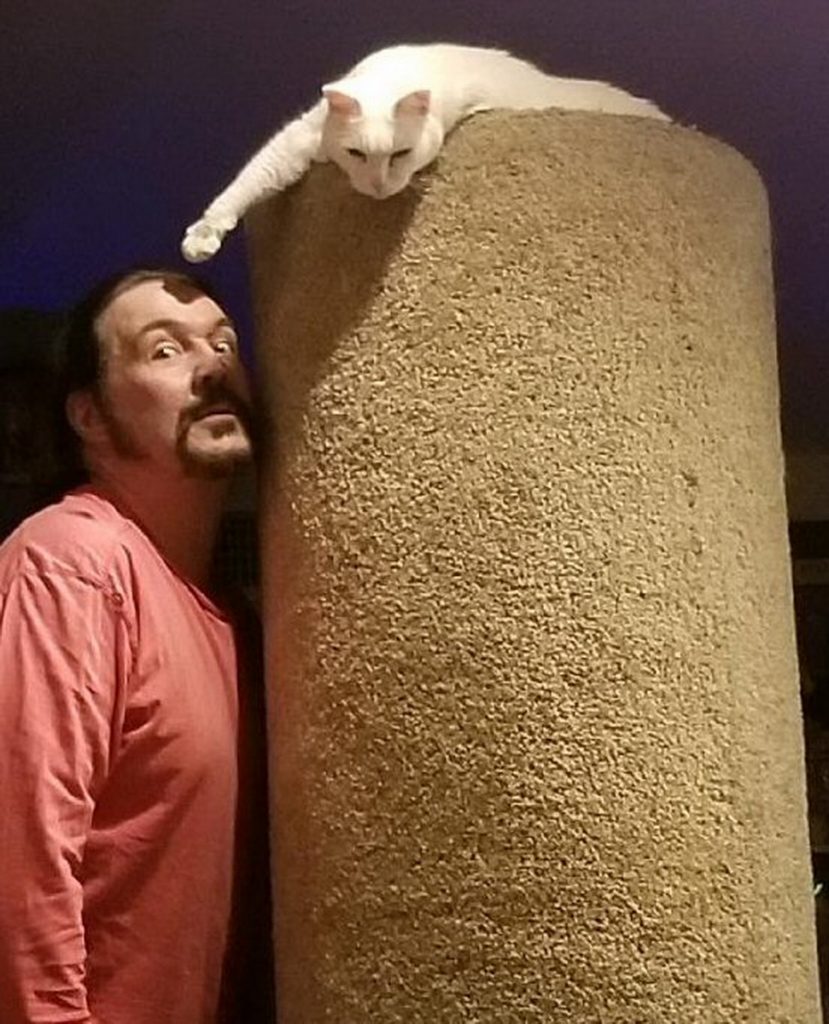 My cat Spook, lording it over me as usual. 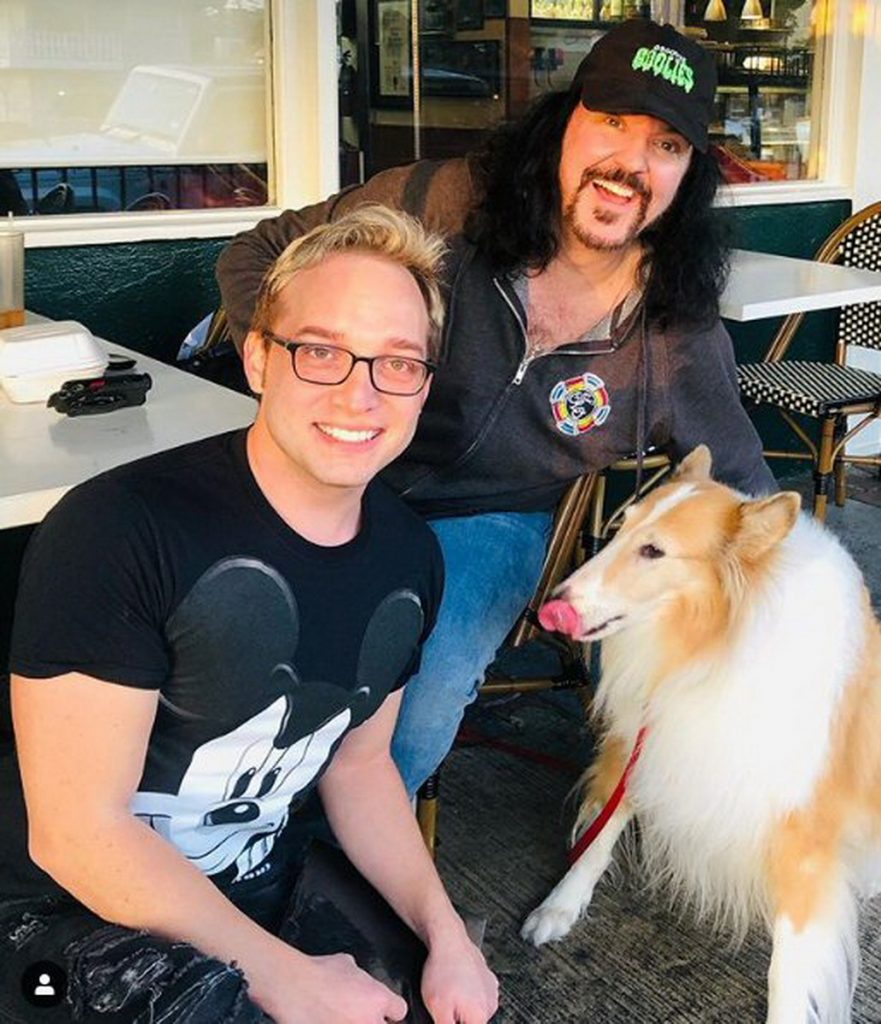 Here’s my buddy Alex Zsolt and I at lunch at Paty’s in Toluca Lake. Glorious day! 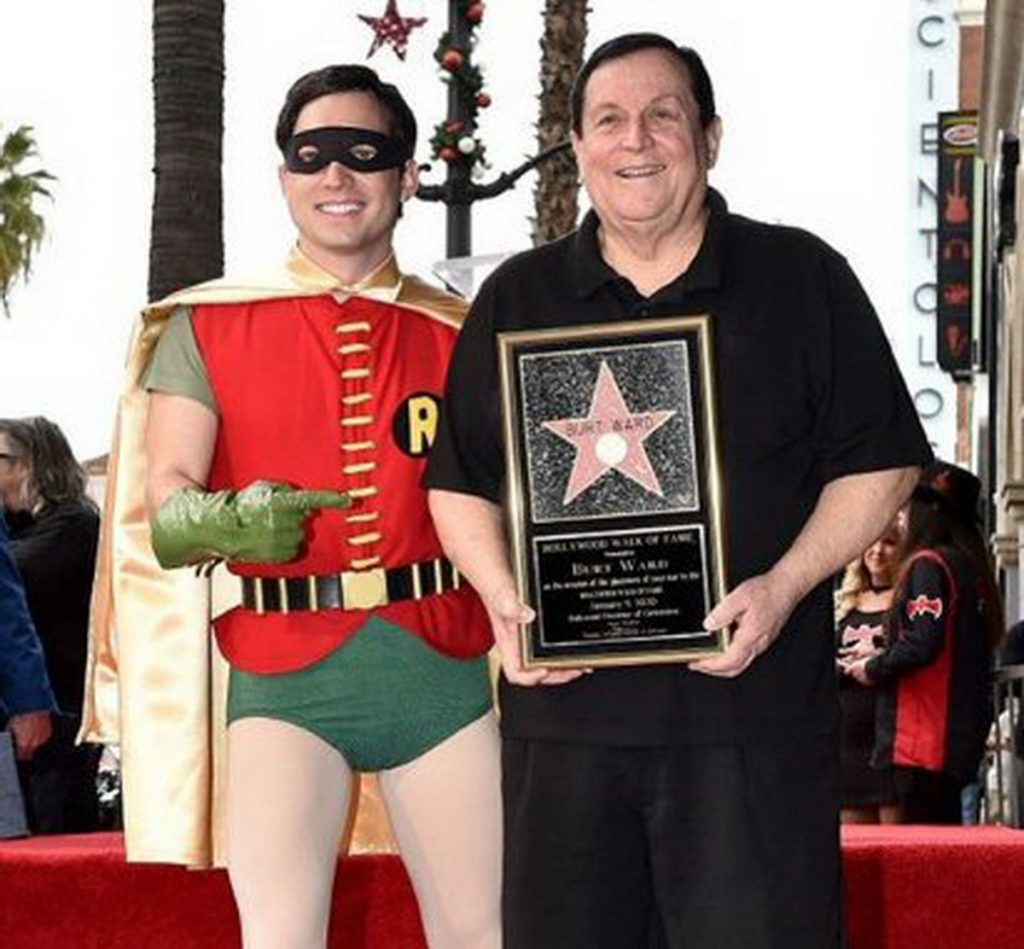 And here’s Alex in his alter-ego as Robin the Boy Wonder at Burt Ward’s Hollywood Star ceremony! Well done, Alex!