There’s nothing like a “mom-decorated” Christmas tree! This is my parents’ tree in the cold, snowy Midwest. Gorgeous! 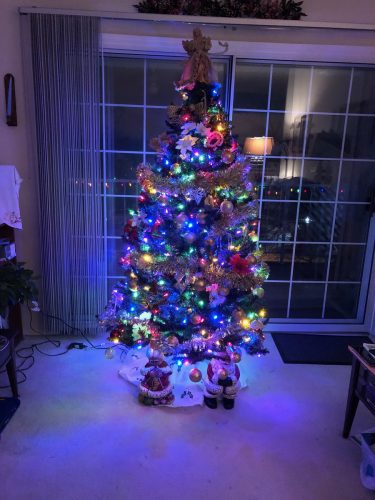 For years I’ve loved Tom Petty’s “Christmas All Over Again.” One, it’s a great song. Two, it was produced by Jeff Lynne. Three, Tom donated all the publishing proceeds from the song to Special Olympics. But for years I’ve been hearing something in my head that I felt was missing from the song. So my pal Scott Sebring manifested my machinations by adding five little notes to the mix. NOW it sounds complete to me! Enjoy it!

Monday the 9th – YEAH, BUT YOU’LL PAY FOR IT LATER! – When I got up at 11 I checked my e-mail, and then was out the door by noon to my Voice Over session for a videogame promo in West LA. I was shocked at how wonderful the traffic was, and I got down there lightning fast! So quickly, in fact, that I had a chance to stop by Taco Bell for a few quick tacos for lunch. We spent an hour in session, and then I hit a few of the local plastic suppliers on the westside to see if they had anything I needed for my Oscar the Grouch replica puppet, and then I hit the freeway to head home. But there was an accident very close to where I needed to get off to go home. Just my luck. Lightning fast traffic on the way there, and horrible traffic heading home. Once I did get home, I did some work, sent some e-mails, fed the pets their snack and then laid down on the couch for some Christmas Nappies. I got up later to do my nightly auditions and then I typed out Wally’s Week. I made my traditional Saturday Night Super Salad (a few night late) and watched an episode of “Space 1999” before bed.

Tuesday the 10th – WRITE IT OFF AS A TOTAL FLOSS! – It was time again for my semi-annual dental check-up, and my dentist didn’t like the fact that I hadn’t been flossing well enough. I gotta get on that! Instead of coming back in 6 months, he wants me back in FOUR! After the appointment I went over to Plastic Depot to see my pal Kyle to get some more Oscar the Grouch plastic eye pieces made. We talked about some great ideas for a brand new, simpler approach to the eyeblink mechanism that had been flummoxing us. I got some lunch at the KFC drive-thru, then hit my box to mail some stuff and pick up some packages. I got home and did some work around the house, took Christmas Nappies, and got up later to record my nightly auditions. I did some more work around the house; just general straightening up and housekeeping things, and then made some hot dogs on the grill and watched an episode of “Police Woman.” Then I hit the hay for the night.

Wednesday the 11th – HOW TO BATHE A MUSTANG! – I arrived in West Hollywood around 1 to meet one of my agents for lunch. He had just been promoted to a great new position and I wanted to chat about future stuff. Come to find out he’s a HUGE fan of the “Halloween” movie franchise so we had LOTS to discuss! After lunch I stopped by Rusty’s Pets to pick up some food and treats for Roxy, and then took my VERY dirty Mustang to the car wash to get it a bath. With all of the unceasing rain we’ve had, it looked awful. But it cleans up very nicely! I got back home and answered some e-mails and did some work. I turned on the fireplace, put the pets on their little perches, turned on the Christmas music on DirecTV channel 815 and settled down on the couch for a few hours of Christmas Nappies. I got up later to do auditions, worked around the house, and prepared to make some lasagna for dinner. It takes 56 minutes to bake (I don’t do microwave stuff) so I took the lasagna out of the freezer and pre-heated the over and prepared the Tranquility Zone for my end-of-evening activities. An hour was up so I went downstairs to retrieve my freshly baked lasagna. But it was odd, because I wasn’t met with the wonderful smell of lasagna coming from the kitchen. I walked into the kitchen and there, sitting on the stove, was my frozen lasagna…STILL FROZEN! I had forgotten to put it in the oven! I didn’t want to waste another hour waiting for it, so I decided to have it another night and make some speedy pizza rolls for dinner. What an idiot I am!

Thursday the 12th – HOW TO BATHE A TORNIO! – At noon I needed to be on my home phone to do an hour-long session for a commercial in my home studio. When I finished I got cleaned up and headed to my auxiliary garage to put the freshly washed Mustang to bed for a while, and I got out my VERY dirty Gran Torino. It was an absolutely gorgeous day! I went over to Lancer’s to meet my pal Daniel Roebuck (famous character actor) for lunch. It’s always good to see my brother-from-another-mother! Then I headed over to the car wash by Warner Brothers Studios to get the Torino hand washed and hand waxed. It looked stellar! The weather will be nice throughout the weekend, so I think I’m going to drive it around for the next few days. I got home and did some auditions, and my pal Brittney Powell came over to do some work for the end of the year wrap-up. Then I enjoyed some more Christmas Nappies. I got up later to feed and walk Roxy, made some lasagna (I put it IN the oven, this time) and watch “Police Woman” before bed.

Friday the 13th – NO MISTER, IT’S MISTING! – Just after 1 I got up and got ready for the maids to arrive. I just lounged around and enjoyed being very lazy. I did some more work on sketching out plans for my Oscar the Grouch replica puppet and waited for the maids to finish up. After they left I took some Christmas Nappies. I really needed a total shutdown day, and today was it! When I got up later I laid out a design for a sampler I’m doing to show off the ideas I have for my children’s book. I had fully intended to go to Denny’s to get some food to go, but when I took Roxy out for her walk, I noticed it was misting out. Not raining, but misting. And since I just had the Torino washed and waxed, I decided to stay put. But the evening was fairly nice nonetheless; misty, but warm and pleasant. Once I put Roxy back inside I decided to walk around the neighborhood at 3am and enjoy a nice cigar. I went inside to make some spaghetti and watch the final episode from the first season of “Police Woman.” I’ve decided not to get the remaining seasons, as the show just didn’t grab me.

Saturday the 14th – STEP OUT AND SHOP SATURDAY! – The attorney who’s handling my kid’s show project wanted me to create some samples that she can show at the upcoming 2020 Toy Fair in New York in February. My seamstress Shelley is swamped with work, so I wanted to get her working on them right away. I went to JoAnn’s fabric, but couldn’t match the fabric I used on my original samples from a few years ago. So I got something that was in the same vein, but a bit different, and a bit more colorful. Then I hit Staples to buy a new 2020 day planner (yes, I still use them!) and I went to the grocery store to get some supplies for that evening’s movie night. I pulled the Torino into the garage, unloaded the goods, and got ready for movie night. What fun! After everyone left I decided to enjoy a bit of a sleepathon. I started with some Christmas Nappies until 3am, fed Roxy, and napped on the couch again until morning. I got up and walked Roxy and got ready for bed.

Sunday the 15th – IT’S COMIN’ ON CHRISTMAS! – Late in the afternoon I got up for evening church. The past 12 hours had been really windy and cold (which was one of the reasons I wanted to enjoy a sleepathon) so I drove over instead of walking. I took my ‘adopted grandma’ Shirley over to Bob’s Big Boy for dinner and we enjoyed some delicious hot soup. I got some mail on the way to take her back to her home, and then I went home to do some work. The entire night I was up doing end-of-year bookkeeping work after I finished my auditions. I always hate this time of year because closing out my corporation is always a huge pain in the asterisk! After I finished up, I treated myself to a trip to Denny’s to get some food to go and watched “Space 1999” before bed. Hard to believe Christmas is 10 days away!! 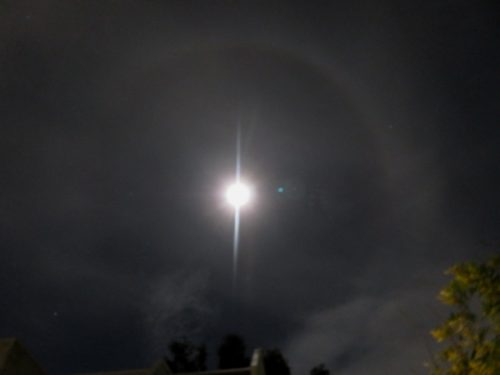 The final full moon of this decade was striking! The ring around it was particularly amazing! 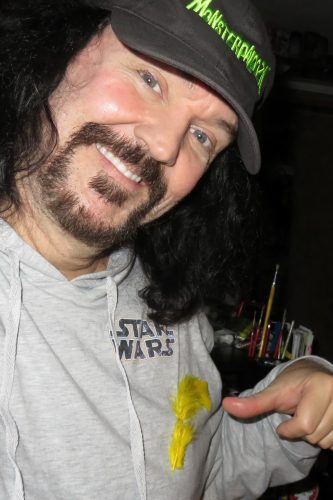 Here I am celebrating the life of Carroll Spinney with my own, personal “Yellow Feather Day.” 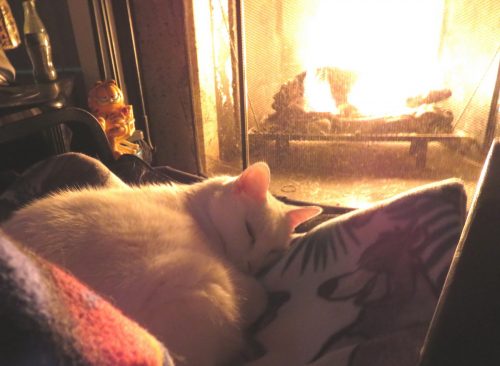 Spook settles into his little perch in front of the fire and does what he does best…naps.